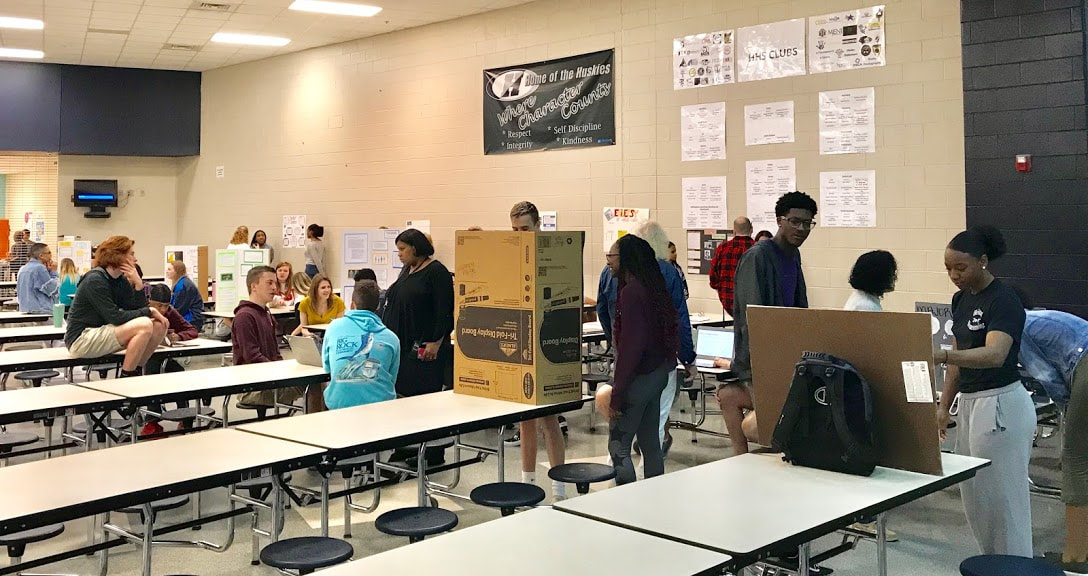 Students, faculty and staff at Heritage High School in northern Wake County attend a diversity fair in the spring. In August, a classroom lesson on diversity at the school was canceled over privacy concerns, drawing statewide news media attention. Photo courtesy of Heritage High School Counseling and Student Services

When a Wake County teacher had her students use a “diversity inventory,” concerns about privacy led the principal to cancel the classroom lesson in late August.

But the question that education leaders in that school district and others across North Carolina are still dealing with is how to teach about identity in the classroom without violating student privacy.

The issue is multifaceted. First, the checklist used in that lesson didn’t quite fit the lesson plan the Heritage High School class was supposed to be using, Wake County Public School System spokesperson Lisa Lutin said. The lesson was intended to teach about identity, not diversity.

The lesson also required students to ask their family, neighbors, peers and others to contribute information. With fields such as “sexuality,” “ability” and “socio-economic status” on the list, some parents felt uncomfortable and contacted the school.

Principal Scott Lyons reviewed the material and canceled the lesson.

Identity and diversity are distinctly separate, according to Dana Griffin, associate professor and faculty chair at the UNC Chapel Hill School of Education.

Griffin does think that teaching about diversity is important.

“I can’t speak for the school or the person who was doing the activity in class,” Griffin told Carolina Public Press.

“When I talk about diversity or cultural identity, I say that I use ‘diversity’ broadly, like as the adjective: ‘We are a diverse population.’ What makes us diverse are our cultural identities. What are our identities? And then, here’s the list: The identity is age, race, social class, gender identity, sexual orientation, religious affiliation or lack of, disability, military, education, right? Work, family, even our family makeup. What I try to do is normalize it, that no matter what or how we identify, or what our experiences are, it doesn’t mean that we are better than or less than.”

It’s important for students to understand that individuals will have various life experiences according to their identities, Griffin said.

Many people tend to think of race or gender as an identity, but Griffin pointed out that identities have many factors. Two people of the same race and religion but in separate social classes would likely have different experiences that would shape their unique identities.

While cautioning that she hasn’t spoken with the Wake County teacher or seen the lesson, Griffin said she avoids taking an inventory of students or having students in a class question others.

“One of the things that we do is we definitely advocate for not outing any of the students,” Griffin said. “Making sure that whatever you do that – students, if they choose to self-disclose, then that would be OK, but not asking questions in a way that would make them have to share anything that they would feel uncomfortable talking about.

“So, we do talk about the need to understand cultural diversity, that students come from different places, have different experiences based on their cultural identities, whether it’s race, ethnicity, social class, gender or sexual identity, or religion,” Griffin continued.

“We talk about all of the different ways that we are different.”

Griffin encourages her counseling students to avoid asking children about themselves but instead to ask questions such as how people in the United States are different from each other.

Armed with that list of general rather than individual differences, the discussion can be approached less threateningly. Children can volunteer information but aren’t put on the spot.

“We set the stage that when we talk about these things, we don’t share information about our personal relatives or our friends,” Griffin said.

“We just talk about from what you know. And we don’t ask them to clarify. If I’m saying, ‘What are ways that people are different in the United States?’ and someone says, ‘Well, people are gay,’ I’ll just say, ‘OK, yes, that’s one way we are different – our sexual identity.’”

The same approach works on a smaller scale such as a school as long as students know ahead of time not to talk about individuals, Griffin said.

Disability, geography and more could be added to the list of facets people add to their identity.

Griffin suggested that if parents weren’t made aware of the diversity inventory, telling them ahead of time might have helped.

“If I was a parent of that child in the room, I would want to know, ‘What’s the purpose? What were you doing with this information? How are you going to use this information?’” Griffin said.

“I would have wanted to see the lesson plan about what the whole purpose was. “I’m OK with having these conversations in schools,” Griffin added.

“I think it’s needed as far as understanding about the world that we live in. I’m OK with that. I just would want to know upfront, ‘Hey, I’m going to be doing this lesson today. This is the information I’m going to be collecting. This is how I’m going to use it.’ And then I would have known beforehand and had more insight instead of just, here’s this piece of paper that the student brought home with this information that was supposed to be collected.”

Counselors prepared with diversity training can help reach students who have absorbed cultural narratives associated with their identities. Griffin helps to prepare counselors to work in one-on-one or classroom settings.

Sometimes, a group of black students may have heard negative stereotypes surrounding black students and a lack of academic success, Griffin pointed out as an example.

“We want them to get rid of those thoughts and negative beliefs that black students cannot be successful,” Griffin said.

Latino students often hear negative stereotypes that they are illegal residents or a “bad person.”

Countering these negative narratives that sometimes cling to perceptions of identities makes having discussions about diversity important. But it has to be done correctly.

“I think what probably went wrong was the information collected,” Griffin said.

In Wake County, Lutin said the teacher who used the diversity inventory was instructed to skip the rest of the lesson. But the district is thinking ahead to next year and the most appropriate way to have discussions about identity.

When asked what plans may be in place, Lutin said it’s a work in progress.

“We have actually been doing a lot of discussion about that among ourselves to make sure that we use this opportunity to provide teachers with the answer to that specific question,” Lutin said.