While the organization is headquartered in Asheville, staff and contributors are located across North Carolina. 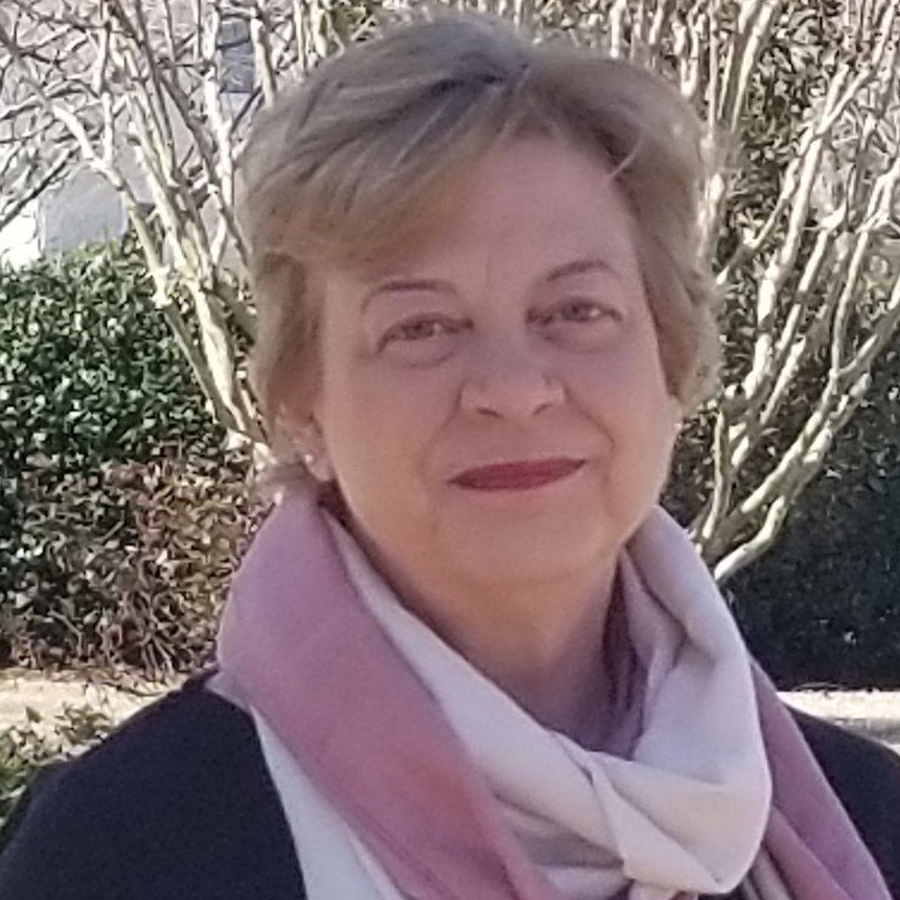 Ellen Acconcia, Director of Audience and Engagement
eacconcia@carolinapublicpress.org
Direct phone: 910-390-1800
Ellen Acconcia joins Carolina Public Press after serving as the director of marketing at the Society of Interventional Radiology, a professional membership association for specialty physicians. She has served as communications manager for the Fairfax County Economic Development Authority, marketed the professional subscription series for the performing arts at George Mason University and publicist at St. Martin’s Press and Doubleday & Co. She holds a B.A. in communications, has completed graduate courses in communications and nonprofit management and is a member of the Editorial Freelance Association and the American Marketing Association. Ellen lives in Brunswick County and oversees audience growth and engagement for Carolina Public Press.

Stephanie Carson, News and Community Partnerships Manager
scarson@carolinapublicpress.org
Direct phone: 828-490-4129
Stephanie Carson has two decades of journalism experience in print, radio and television and as a special projects producer, an editorial director and field producer for outlets including CBS News, Bloomberg Financial Television and the Public News Service. Her work has earned her two Mid-Atlantic Emmys and an Edward R. Murrow Award for Excellence in Journalism. In addition to her journalism work, Stephanie co-owns an event company where she manages events, secures strategic partnerships and maintains community and business relationships. Stephanie lives in Buncombe County and oversees news and community partnerships for Carolina Public Press across North Carolina.

Tara George, Administrator
tgeorge@carolinapublicpress.org
Direct phone: 828-490-4131
Tara George graduated with honors from San Diego State University with a bachelor’s degree in applied design. A desire to be more involved and make a difference in the community brought her to the nonprofit world, where she has worked in development, project and office management for organizations including Land of Sky Regional Council and OnTrack Financial Education and Counseling. Tara lives in Buncombe County and assists with community engagement planning and office and financial systems for Carolina Public Press.

Lisa Lopez, Director of Development
llopez@carolinapublicpress.org
Direct phone: 828-490-4130
Lisa Lopez has more than 20 years experience in the nonprofit sector. She joins Carolina Public Press after three years at Development by Design, LLC, a development strategy consulting firm she helped found. Prior to launching her own company, Lisa served for 14 years in development at the Center for Creative Leadership, a top-ranked global provider of leadership development. She began her fundraising career at the American Red Cross Cape Fear Chapter and went on to seek and secure major gifts for the UNC Wilmington Center for Marine Science. She also has worked in both production and advertising/sales in TV and radio news organizations. Lisa lives in Guilford County and oversees development for Carolina Public Press across North Carolina.

Kate Martin, Lead Investigative Reporter
kmartin@carolinapublicpress.org
Direct phone: 919-569-5410
Kate Martin has been a journalist for more than 15 years covering topics including education, government and business. Her passion for data and open records has led her to expose a school district’s misspending of taxpayer funds and pursue records governments wanted to keep hidden. She joined the Carolina Public Press team after five years at The News Tribune in Tacoma, Wash., where she reported on the police department’s use of mass cell phone surveillance equipment without explaining the devices to judges. In 2011, while working with the Skagit Valley Herald, she earned a Rural Computer Assisted Reporting fellowship with Investigative Reporters and Editors. Her work has led to the creation of five state laws and the resignation of four elected officials. She has spoken at Investigative Reporters and Editors, National Institute for Computer Assisted Reporting, and is a founding member of Northwest News Nerds. Kate lives in Orange County and is the lead investigative reporter for Carolina Public Press, following and pursuing stories across the entire state.

Angie Newsome, Founder and Executive Director
anewsome@carolinapublicpress.org
Direct phone: 828-348-0808
Angie Newsome founded Carolina Public Press, which launched in March 2011. A North Carolina native with a master’s degree in journalism from UNC Chapel Hill, Angie has more than 15 years of experience in daily, online and magazine journalism. She has won numerous awards, including for reporting on the international banking interests of a North Carolina congressman and for following the closure of the nation’s last Levis sewing plant. After launching Carolina Public Press, she was named one of four New Media Women Entrepreneurs in the country by the McCormick Foundation in 2012. Carolina Public Press has gone on to be a featured media startup by PBS MediaShift and J-Lab and to earn numerous awards, including for its environmental, mental health and investigative reporting and for general excellence among North Carolina’s online news organizations. Angie lives in Buncombe County and oversees efforts to improve and measure the sustainability, reach and impact of Carolina Public Press and its work across North Carolina.

Frank Taylor, Managing Editor
ftaylor@carolinapublicpress.org
Direct phone: 828-490-4126
Frank Taylor worked in the news industry for more than 20 years before joining Carolina Public Press in October 2015, including as an editorial writer for The Fayetteville Observer and Florida Today and as managing editor of The Lincoln Times-News, The Mecklenburg Times and Tarboro Daily Southerner. He has received numerous awards for investigative reporting and other reporting and editing work throughout his career and is a two-time winner of the N.C. Press Association’s Freedom of Information Award. Frank received his master’s degree in journalism from UNC Chapel Hill and has done additional graduate work in history at Western Carolina University. His academic research has focused on news organization best practices for fact-checking articles on scholarly topics in a digital environment, precedent gaps in U.S. libel law, and the colonial and revolutionary eras in North Carolina. He’s also served as an adjunct professor at Brevard College. Frank lives in Buncombe County and oversees the journalism produced by Carolina Public Press and serving all North Carolinians.

Calvin L. Adkins, Photographer
calvadki@aol.com
Calvin L. Adkins is a photographer who started his career as a photo stringer for The Daily Southerner in 1989. He went on to work as a photographer and cops reporter at the newspaper and was its editor until it closed in 2014. Calvin was born in Princeville, N.C., the oldest town in the United States chartered by African Americans. He still lives in Princeville, in Edgecombe County, today.

Rebecca Andrews, Reporter
becca.andrews96@gmail.com
Rebecca Andrews graduated from UNC Asheville with a degree in mass communication and a minor in sociology. She spent two and a half years working for her college newspaper, The Blue Banner, as a reporter and, for the last year, as copy desk chief. Rebecca is originally from Durham and now lives in Buncombe County.

Jack Igelman, Lead Environment Reporter
jack@igelman.com
Jack Igelman is a reporter with a master’s degree from Montana State University, where he studied natural resource economics. His main interest is in conservation and environmental stories that on the people, places and institutions involved with managing the state’s natural resources. Co-author of Trekking the Southern Appalachians and currently teaching college-level economics, Jack’s reporting has appeared in dozens of local, regional and national publications. Jack lives in Buncombe County.

Karrigan Monk, Reporter
karriganmonk@gmail.com
Karrigan Monk is a reporter with a bachelor’s degree in mass communications from UNC Asheville. She spent two years working for her college newspaper, The Blue Banner, eventually serving as the paper’s editor-in-chief. Karrigan grew up in Gaston County and now lives in Buncombe County.

Colby Rabon, Photographer
colbyrabon@gmail.com
Colby Rabon is a freelance photographer with a bachelor’s degree in technical photography from Appalachian State University. Colby currently shoots a range of material from documentary projects to news, sports, portraiture and more and has had work featured in local and national publications. Colby lives in Buncombe County.

Matt Rose, Photographer
mattrosephoto@aol.com
Matt Rose is a photojournalist, formerly with The Times-Picayune, of New Orleans, with more than 20 years of photography experience. During his successful and award-winning career, he has photographed, among other things, U.S. presidents, Super Bowls, floods and Mardi Gras. Rose has won numerous Associated Press and National Press Photographers Association photography awards and shares a staff Pulitzer Prize for Hurricane Katrina coverage. Matt lives in Buncombe County.

Kirk Ross, Capital Bureau Chief
kross@carolinapublicpress.org
Based in Chapel Hill, Kirk Ross is a longtime North Carolina journalist and Carolina Public Press’s lead journalist reporting on the N.C. General Assembly. His reporting and opinion writing has appeared in multiple publications, including the News & Observer and The Washington Post. Kirk lives in Orange County.

Mariano Santillan, Illustrator
Mariano@santillan.cc
Mariano Santillan is currently the web designer and illustrator for the USASOC History Office on Fort Bragg. Before that position, he spent over a decade as the graphics editor and illustrator for The Fayetteville Observer. Some of his freelance clients include The Washington Post, The U.S. Army and Cricket Magazine. Mariano lives in Cumberland County.

Imari Scarbrough, Reporter
imari.scarbrough@gmail.com
Imari Scarbrough is a freelance journalist with a bachelor’s degree in communications and minors in English and music from Montreat College. She worked as a staff writer at The Anson Record for five years, earning five awards from the N.C. Press Association and covering crime, politics, education, local government and more. Imari lives in Stanly County.

Carolina Public Press Board of Directors

Carolina Public Press is a member of the Institute for Nonprofit News and the N.C. Press Association. Certain staff members and contributors are members of Investigative Reporters and Editors and the Society of Environmental Journalists.