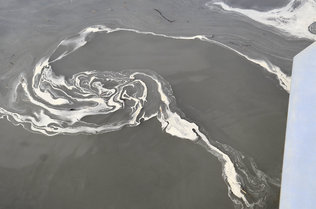 A vortex of coal ash swirls in the gray waters of the Dan River in 2014 at Danville, Va. downstream from the Duke Energy Steam Station in Eden, N.C., where a major spill occurred. John D. Simmons – jsimmons@charlotteobserver.com

Forget all the public hearings, spilled ink and hand wringing earlier this year over how the North Carolina Department of Environmental Quality would regulate the cleanup of coal ash in unlined basins, because the General Assembly has just changed the rules of the game with the Drinking Water Protection/Coal Ash Cleanup Act of 2016.

The measure is drawing an outcry from environmental organizations who had worked for stringent enforcement of the old coal ash rules. But Duke Energy has expressed support for the action.

Some House legislators who opposed the bill were especially critical of the process in which it was drafted.

“This is a compromise developed between Duke, the governor, (the Department of Environmental Quality) and the Senate, with no environmental advocates and, as far as I know, no one from the House,” Rep. Pricey Harrison, D-Guilford, told the News & Observer.

Gov. Pat McCrory, a former employee of Duke who served as mayor of Charlotte where the company is based, successfully sued to have some provisions of the old coal ash rules, the Coal Ash Management Act, partially overturned. At issue was legislative oversight for appointments to a coal ash commission. The courts agreed with McCrory that this was an unconstitutional intrusion into powers that should belong to the governor.

McCrory then vetoed an initial proposal drafted by the House that would have set up a new model for oversight how DEQ enforces cleanup requirements in the coal ash rules. The legislation approved this week comes instead from the Senate where it passed easily earlier in the week.

The final 82-32 vote on in the House split both parties Thursday. Though 20 Democrats, especially those representing the Charlotte area, supported the measure, all of those in Western North Carolina opposed the bill.

And while most House Republicans favored the new law that passed the Senate with a scant four votes in opposition, 11 GOP members of the House objected to the weaker protections for residents and lack of legislative oversight in the new bill. That included two WNC Republicans who voted against the measure, Rep. Chuck McGrady of Henderson County and Rep. Jonathan Jordan of Ashe County.

McGrady, who authored both the Coal Ash Management Act of 2014 and the bill that McCrory vetoed earlier this year, had told Carolina Public Press earlier this week that he expected to vote against the measure due to cutting the General Assembly out of an oversight role.

“One of my concerns has always been oversight,” he said.

Another Henderson County lawmaker, Sen. Tom Apodaca, was the new measure’s main sponsor and told CPP this week that he believes it’s a good compromise.

“The issue of coal ash is complex, but our goal is simple — have a smart, science-driven process that keeps our residents safe and our power reliable — and this bill does that,” he said.

Unlike the old rules and the House bill that the governor rejected a few weeks ago, the new measure would allow Duke to leave many of its unlined coal ash basins capped in place with no removal of the material that could be leaking into the surrounding sediment and groundwater.

While environmental groups and some residents have said they fear coal ash seepage is making well-owners sick, Duke has said its analysis shows the directional flow of subsurface water makes well contamination from its basins unlikely.

Both sides talked about the facts and the science as the appropriate guides to good policy, though each clearly supported a different version of what the facts and science have to say on the issue.

One aspect of the new bill found general support from most observers. It would provide water to some of the residents near Duke’s facilities, a measure that made the bill attractive to many lawmakers.

“(We stand) with our friends and partners who are living or threatened by toxic coal ash in North Carolina,” Katie Hicks of Asheville-based Clean Water for North Carolina told Carolina Public Press in an email Friday. She expressed “deep dismay at the passage” of the bill.

“State leaders created one set of rules, then changed the rules mid-way through to give Duke Energy the advantage,” Hicks said. “This was a major disservice to the residents and waters of North Carolina. We will continue to stand with our community partners to make sure that those affected do get the clean drinking water promised in this bill, and will also keep fighting for truly safe and just solutions to toxic coal ash.”

“The North Carolina Legislature today carried water for Duke Energy, but turned its back on the clean water and communities of North Carolina,” said Frank Holleman, senior attorney at the SELC, in a statement on Thursday.

“Thousands of citizens and community groups participated in good faith in public hearings and public comments this year, and (more than) 98 percent of them called upon Duke Energy to remove its coal ash from unlined leaking pits in their neighborhoods.

“The science, the facts and North Carolina’s Coal Ash Management Act require Duke Energy to excavate the ash from these dangerous riverfront pits – as even N.C. DEQ was forced to acknowledge. The legislature has done was Duke Energy’s lobbyists told it to do, threw thousands of public comments in the trash can, and protected Duke Energy while sacrificing the well-being of North Carolina’s clean water and communities.”

The SELC’s analysis of the new bill said that it “guts provisions” of the old rules found in the North Carolina Coal Ash Management Act, but “does not affect those laws or those enforcement proceedings.”

Some WNC residents also expressed concern about the legislative action, despite the provisions for water.

“If they go through with putting in water lines to our community, that’s a great step in the right direction, but it’s a half step,” said Roger Hollis, who lives near the Cliffside plant located near the line between Rutherford and Cleveland counties. In remarks released by Clean Water for North Carolina, Hollis added that just bringing in water is “not getting all the way there by cleaning up the ash.”

Duke Energy’s perspective on the new law was much more upbeat.

“We appreciate the legislature and administration working together to craft a bipartisan solution that protects the environmental and local communities, while preserving the full range of options to safely close ash basins in ways that also protect customer bills,” said a statement from Duke Energy. The company had previously warned that costly cleanup mandates could result in higher electric bills for consumers, though that’s something the state Utility Commission would first have to approve.

“The flexibility that this law provides will help ensure that science, not special interests, can provide the right closure solution for each of our sites. We are committed to meeting the requirements of the law and to being a leader in the safe closure of ash basins across the state.”

In WNC, Duke operates the Cliffside plant and a coal-burning facility in Buncombe County that produces coal ash. Thursday’s legislation would likely affect the Cliffside coal ash basins but not the Buncombe basin, which is considered a high hazard due to its structure and location. Excavation of coal ash from both sites is underway, but Duke has expressed interest in capping some of its coal ash storage at Cliffside, rather than excavating it.