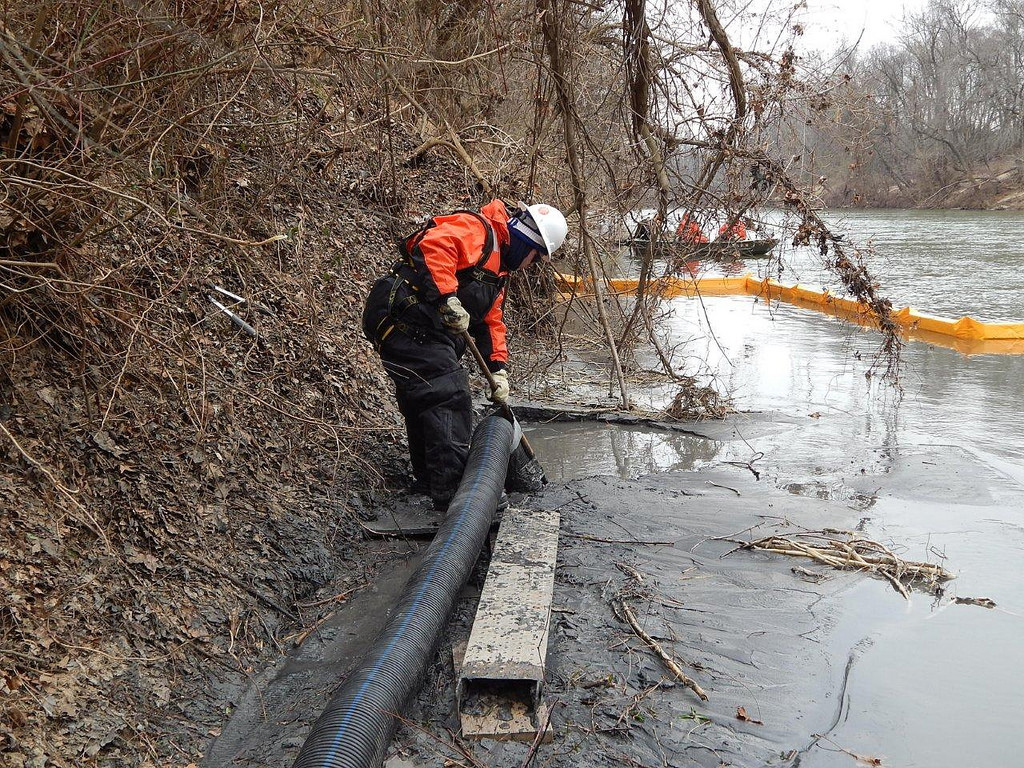 Crews remove coal ash from a section of the river bottom near the Dan River Steam Station in Eden, N.C., in 2014. Photo from Duke Energy.

Coal ash isn’t toxic, in fact it’s harmless, according a new report that Duke Energy has been disseminating this week.

But a Carolina Public Press investigation has found serious doubts about the credibility of the report that relies heavily on the statements of one scientist who may have been misquoted or taken out of context.

Coal ash, which is left over from burning coal and in North Carolina has been stored in open basins with no underlying lining, has frequently been considered a pollutant by many public policy makers. Many of the chemicals contained in coal ash pose well-established health hazards.

So, the article’s assertion that the substance isn’t harmful is both controversial and surprising.

While Duke Energy has promoted alternative solutions to handling its coal ash waste besides removing it, the company has generally focused on the improbability of it polluting nearby wells even when it does get into groundwater.

Claiming that toxicity isn’t a valid a concern hasn’t been an angle the company pursued previously.

Carolina Public Press contacted the scientist on whom the article relied for its claims. His response raised questions about the integrity of the reporting in the article from the organization Watchdog.org and why Duke Energy would promote an article with such dubious claims.

Watchdog.org’s article calls those assertions false. “But contrary to the NRDC’s claims, the ash isn’t ‘toxic’ and hasn’t contaminated drinking water, according to the experts,” the Watchdog.org article says. Then the article makes good on that claim by quoting those experts.

Actually, Parker’s story could only muster one expert.

Sarma Pisupati chairs the energy engineering program at Penn State University College of Earth and Mineral Sciences. Although not in a direct quote, Parker credits Pisupati with saying coal ash is harmless.

But the quotes Parker cites don’t necessarily support that contention.

“We have to define what toxicity is,” Pisupati is quoted as saying. “If I consume it as food, yes, it is toxic, but if I am exposed to it accidentally or walk through a pile of ash, it is not at all. If we dispose of it off in a proper way in a landfill it is not toxic at all.”

But Pisupati’s statements don’t appear at all connected to the issues at stake in North Carolina, the issues being addressed by the NRDC campaign, which is the supposed topic of the Watchdog.org article. He said coal ash is toxic to consume as food, though not to walk in, but never addressed whether drinking water that coal ash has contaminated would be hazardous, at least not in the quotes that Parker selected for this story.

His remarks about landfills also don’t fit the situation in this state where Duke Energy has stored much of its coal ash in unlined basins and the most legislative package would allow the company to cap most of those basins in place, so that any seepage into the soil and groundwater would continue.

Landfills and basins are fundamentally dissimilar because landfills have to be lined to prevent seepage. So, remarkably, none of the scientist’s quoted remarks relate to the issues in the NRDC ad about North Carolina that he’s supposedly refuting.

CPP contacted Pisupati for clarification, posing questions related to the situation in North Carolina and his remarks about landfills. Instead of answering CPP’s questions, he appeared to distance himself from Parker’s reporting.

Pisupati declined to be interviewed directly, but sent word through Penn State media relations that he had only intended to quote from the Environmental Protection Agency in his remarks and never intended to become involved in the “political end of the discussion.”

The EPA and coal ash

Pisupati’s reference to the EPA may explain how his actual comments were construed as saying coal ash was “harmless,” when elsewhere he clearly says its toxic for consumption.

That’s because the EPA, in its bureaucratic web of classifications, has labeled coal ash as “non-hazardous solid waste.” That might seem to translate to “harmless,” but that doesn’t seem to be what the agency intends.

“The EPA’s decision to regulate coal ash as non-hazardous solid waste after a lengthy public comment process, including extensive input from industry, was not without controversy,” Katie Hicks of Clean Water for North Carolina, an Asheville-based advocacy group, told CPP in an email on Thursday.

“This decision absolutely does not mean that coal ash is totally harmless. EPA acknowledges the need to regulate coal ash, stating, ‘Coal ash contains contaminants like mercury, cadmium and arsenic. Without proper management, these contaminants can pollute waterways, ground water, drinking water and the air.’ ”

The Watchdog.org article also cites the EPA’s determination that the 2014 Dan River spill did not impact public drinking water. What Parker’s report fails to say is that the EPA and state of North Carolina were concerned about the threat to surface water drinking supplies if the spill had gotten into them. The issue was whether contamination actually occurred, not whether it would have posed a threat. The EPA felt such contamination would have been hazardous, which was why the determination was important.

But, Hicks noted, this is all beside the point because the issue facing North Carolina right now isn’t potential surface water contamination from the Dan River spill more than two years ago, but seepage from unlined coal ash basins into the groundwater.

“This report seems to mix up how communities’ drinking water is being impacted by coal ash in North Carolina,” she said.

“It mentions that there were no violations of drinking water standards for downstream drinking-water supplies after the Dan River coal ash spill into surface water — yet seems to ignore … that the most widespread drinking water concern is from contaminated groundwater at all of the unlined coal ash basins.”

The ‘journalist’ and the ‘watchdog’

CPP attempted to talk with Parker about the response from Penn State, emailing him with a series of questions about whether Pisupati might have been taken out of context and how he came to write the article in the first place. CPP also left a message at Watchdog.org’s office seeking an interview with Parker.

Parker sent two emails in which he listed energy stories that he and other Watchdog.org writers have published. While some of the other writers’ articles touched on coal ash spills, none of them addressed the issue of storing coal ash in unlined basins that has become the lightning rod question in North Carolina.

Parker also failed to address or even acknowledge CPP’s questions and Pisupati’s unwillingness to stand by the story in which Parker featured the scientist so prominently.

What may be telling are the topics of some of Parker’s earlier articles, which generally focused the political struggle between advocates for fossil fuels and advocates for renewable energy sources in Vermont.

According to Watchdog.org, Parker’s stories have been featured in a range of news media outlets. Some like FoxNews.com and the Washington Times are notable for their conservative slant. But it also cites his work for more mainstream media outlets, such as Politico.

As for Watchdog.org, the organization’s reputation in reporting on energy issues is linked to the influence of Charles and David Koch, energy magnates who are well-known for funding conservative political activities and in promoting a pro-fossil-fuel agenda within conservative politics.

According to a 2013 article in Columbia Journalism Review, the nonprofit organization behind Watchdog.org, the Franklin Center for Government and Public Integrity, receives the overwhelming majority of its funding from the Donors Trust charity, “whose top contributors were the Koch brothers.”

Parker’s report quotes extensively from Duke spokesperson Paige Sheehan, who talks about the lack of evidence that wells have been contaminated by coal-ash basin seepage or that contaminants found in well water is coming from nearby coal ash storage.

But don’t expect Sheehan or anyone else from Duke Energy to volunteer for a photo of them downing a tall glass of coal-ash water. She never says what Parker’s article asserts – that coal ash is harmless.

CPP contacted Duke Energy about its dissemination of Parker’s article after identifying substantial problems with his reporting and factual claims, asking the company whether it stood by those claims.

“We shared the story because we believe it helps raise important facts that NRDC ignored in its advertisement, and we always encourage reporters to challenge statements like those offered by the special interest group,” she said.

Far from saying any possible contamination is harmless, Peoples emphasized that Duke is taking precautions.

“We are committed to the safe management of coal ash and meeting the requirements of applicable regulations,” she said. “We have a team of technical engineers dedicated to studying the groundwater at our sites.”

Duke Energy operates two coal-burning sites that have ash containment facilities in Western North Carolina, one in Buncombe County and the other near the Rutherford and Cleveland county line. Due to risks not related to toxicity, all of the ash from the Asheville site is being excavated. The other site has been partially excavated, but Duke Energy has pushed for the option of capping some of the remaining coal ash in place, which the most recent legislation would allow, though this was previously opposed by the Department of Environmental Quality.

Rob Perks, who directs the NRDC’s campaign in North Carolina, talked with CPP on Thursday about the Watchdog.org attack on his group’s ad.

“We stand by that ad,” he said. “It’s very thoroughly sourced.” Later he added that “any claim that it’s false is ridiculous.”

Perks said he shared the Watchdog.org piece with one of his colleagues who described it as “one of the dumbest arguments” he had ever seen.

While claims that coal ash is harmless may be new, Perks said he’s no longer surprised by attempts to undermine the environmental advocacy organization’s advertising despite what he described as rigorous work to be sure they are factually correct before being aired.

During an earlier ad campaign, Perks said, state government officials advised broadcasters not to run the some of the NRDC’s ads because they were false and the stations might face lawsuits. He said the NRDC told the broadcasters it stood by those ads, which ran without further incident.