BREVARD — Transylvania County is embroiled in a lawsuit with a former Department of Social Services supervisor whose alleged activities raise doubts about how the county’s child protective services division handled cases under her watch. 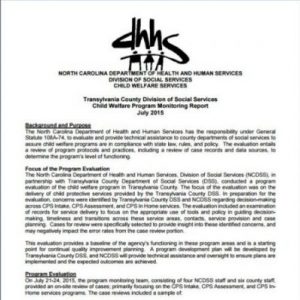 As a result of Court of Appeals testimony in a lawsuit between Transylvania County and a former DSS supervisor, a scathing 2015 state review of that supervisor’s unit has come to light.

The legal dispute also suggests counties across North Carolina may face systemic concerns with keeping children safe as tight-knit relationships between social workers, law enforcement officials and judges create webs of interaction ripe with potential conflicts of interest and without much external scrutiny – until the problems became the subject of expensive lawsuits for which taxpayers may be picking up the bill.

Renee Crocker, who began working for Transylvania County DSS in 1999, became a supervisor for the county’s Child Protective Services division in 2013. In 2015, the county fired her for having outside contact, known in legal terms as an “ex parte communication,” with Judge Emily Cowan, court records show.

The judge mediated a custody dispute between Brevard resident Lauren Brown and Marquis Swarn, a convicted felon who served time for multiple drug-dealing convictions in 2007 and has faced repeated arrests for assault, illegal firearm possession and DWI. Swarn is also Crocker’s daughter’s boyfriend. Following the ex parte communication, Cowan recused herself from a hearing in the custody case.

Crocker’s communication with the judge came to light through Sandra Brown, Lauren’s mother and grandmother to the child that is at the center of the custody dispute. Sandra Brown had already filed multiple complaints with Transylvania County DSS, beginning in 2014, accusing Crocker of using her position to influence the outcome of Swarn’s custody battle and leaking confidential information about the case, court records show. The county investigated those initial allegations against Crocker beginning in June 2015, and concluded they were without merit in October 2015, according to court testimony from Transylvania County attorney Tony Dalton.

But in the meantime, Brown told a September 2015 DSS board of directors meeting that she had also learned about Crocker’s inappropriate conversation with Cowan, court records show. Because Crocker’s interaction with the judge violated judicial rules about the kinds of communication judges can have with parties not involved in the cases they’re hearing, and was also a violation of DSS ethics policy, DSS director Tracy Jones terminated Crocker in October 2015, according to Jones’ later court testimony.

In the termination letter that Crocker received from Jones, she wrote that Crocker had been warned after “multiple complaints and allegations have been made against you with all involving use of your position with the Transylvania County Department of Social Services to influence court decisions in a private custody case that is not affiliated with our agency.”

Carolina Public Press has attempted to contact Crocker, but she had not responded as of publication time.

Concerns about Crocker’s communication with Cowan might have been dismissed along with Brown’s other allegations, except that this time a recording backed up the claim. A recording device in the courthouse captured Swarn’s attorney talking about Cowan’s recusal, later court records show.

According to court filings, Brevard attorney Mack McKeller, who was representing Swarn in the custody dispute, was recorded discussing the ex parte communication prior to the hearing that Cowan had recused herself from.

“Judge Cowan has had some communications with one of the parties, and she felt it rendered, made her, made it probably improper for her to hear this motion,” McKeller said, according to court filings.

A court order that came out of that hearing, which didn’t name Crocker, said Judge Athena Brooks was hearing the case “due to the self-recusal of District Court Judge Emily Cowan because of extra-judicial communication by a non-party.” Cowan also told Dalton that the ex parte communication was the reason she recused herself from the hearing, according to Dalton’s court testimony.

However, Crocker has not denied talking with the judge. Crocker admitted contacting the judge by text message to ask about the legality of taking the child out of state on a vacation, according to a separate defamation lawsuit that she filed against Brown.

Crocker’s lawsuit accused Brown of libel and defamation based upon two Facebook pages that Brown created to document the custody dispute between her daughter and Crocker’s daughter’s boyfriend. Crocker’s attorneys have said Jones based her decision to terminate Crocker, in part, on those social media pages, according to their filings in the lawsuit against the county. The county’s attorneys and Jones have denied that the Facebook postings influenced the decision to fire Crocker.

In the defamation case, Brown successfully had the litigation moved from local courts in Transylvania County to federal court in Asheville because Brown is a resident of South Carolina. Crocker voluntarily dropped the federal defamation suit in late 2016 following a win in her case against the county in a state Office of Human Resources hearing, with the caveat that she could refile the defamation claim if the Court of Appeals ruled against her in the county case.

Even though Transylvania County’s initial investigation of Crocker found no evidence of wrongdoing, Crocker was told, during a meeting with Dalton and Carson Griffin, then the interim DSS director, that there was a “need to avoid the appearance of impropriety” in Crocker’s involvement with her daughter’s boyfriend’s custody dispute, court records show. County officials cited the directives given in that meeting as an aggravating factor in Crocker’s later termination.

Jones, who became director of Transylvania County DSS in August 2015 after serving as director of Graham County DSS, held a meeting with Crocker in October 2015 to discuss the ex parte communication. The following day she terminated Crocker’s employment. Lawyers for Transylvania County said that, at that meeting, Crocker admitted to communicating with Cowan but did not “present any evidence or information to justify her conduct or to otherwise suggest that she should not be disciplined for her actions.”

Jones wrote in the dismissal letter that Crocker’s behavior could jeopardize future cases that required her involvement as Child Protective Services supervisor. She also expressed concern that despite warnings about this precise situation, Crocker claimed not to know that contacting the judge was inappropriate.

“The very nature of (Crocker’s) job responsibilities involves significant court involvement which may now be perceived in a negative light due to (her) involvement and actions in the (custody dispute),” the letter said.

Attorneys for the county said DSS employees are trained not to contact judges directly, except in emergency situations in which DSS is taking immediate custody of a child. They said Crocker’s violation of that directive meant “the county could not trust her judgment moving forward.”

Crocker disputed her termination and appealed the case to the state. An Office of Human Resources judge ruled in May 2016 that she was improperly terminated and should be given her job back. The county then appealed that decision to the North Carolina Court of Appeals, which heard arguments in the case on Feb. 7. An official with the Court of Appeals clerk’s office in Raleigh told CPP that it could take up to 90 days before a judgment is handed down.

Crocker’s attorneys argued in their Court of Appeals filings in November 2016 that she shouldn’t have been fired because the hearing Cowan recused herself from was “to correct a clerical error in the consent order” and that “the custody case was no longer ongoing,” so the text “had no effect on the merits of the custody case.” The attorneys also argued that Jones should have considered alternative disciplinary measures, rather that moving immediately to fire Crocker.

McKeller was called to testify in the administrative court hearing and said, in contradiction to his statements in court prior to the custody hearing, that Cowan recused herself from the case because of her friendship with Crocker, not because of the ex parte communication. The reasons for the judge’s recusal remains a point of contention between the parties. Cowan invoked judicial immunity when asked to testify about the issue herself.

While attorneys for Transylvania County said Crocker was dismissed because of the ex parte communication with Cowan. that incident wasn’t the first time problems with Crocker’s supervision of the CPS unit raised state and county concerns.

Crocker told the judge at her Office of Human Resources hearing that she had never received anything other than good or excellent reviews while employed by Transylvania County and said she had never been the subject of any disciplinary action.

But county records presented to the Court of Appeals tell another story. In May 2015, Crocker was given a written warning about the CPS unit’s record-keeping practices being “grossly out of compliance,” according to court filings.

Jones also told the court that there were “a few written warnings” in Crocker’s personnel file, along with some positive performance reviews. Court filings say the warning directed to Crocker was only given after “many discussions with Ms. Crocker regarding her unsatisfactory record-keeping practices.”

The state found similar problems in the CPS unit two months later. A review by the North Carolina Department of Health and Human Services found issues in the areas of CPS intake, assessment and in-home services when reviewing assessments from January-July 2015 and open in-home cases in July.

That state review was “probably the worst review I’ve ever seen,” Jones said, according to the county’s legal filings.

CPP has obtained a copy of the DHHS report on its investigation. The problems went far beyond record-keeping issues. The state team found that a little more than half of a sample of 55 reports of abuse or neglect were evaluated using the appropriate screening tools and that half of the reports that were screened out didn’t include enough information for state reviewers to determine why the reports were screened.

The state also found problems in the way the CPS unit placed children with the families or friends of parents, also known as “safety resources,” in cases where “it is decided that the child must be placed outside of the home to ensure safety, or a parent is seeking treatment or respite care for their children.”

In a review of nearly 50 cases, the state found that two-thirds of the safety resource homes were given appropriate assessments even though nearly half of them were never checked for criminal records. The state also found insufficient record-keeping related to contacts between social workers and parents during the time between a report being filed and a decision being made by DSS.

The DHHS report concluded that “a lack of training” was having a negative effect on the CPS unit. DSS staff members working under Crocker told the state team that training wasn’t a priority and had, at times, been discouraged.

“During the quality-assurance phase of this on-site review it became clear that many staff, regardless of experience, were not familiar with requirements from rule/law/policy related to the work they are currently practicing,” according to the report.

Editor’s Note: The article, which first appeared on Feb. 16, 2017, was updated on Feb. 17, 2017, to reflect additional details in county records that CPP had requested but did not receive until after the initial publication.