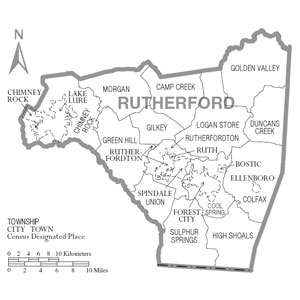 The clerk for one Rutherford County town notified Carolina Public Press on May 2 that the town board wouldn’t comply with a request for salary records for town officials unless a reporter attends a town meeting and presents credentials.

However, since the publication of an initial version of this article, the town has provided the requested information.

Those board members’ original perception of the law was “far off-base” according to Amanda Martin, chief counsel for the North Carolina Press Association. She also indicated that the town leaders’ interpretation of the law undermined rights guaranteed everyone, not just members of the press.

The town of Ruth, which had a population of about 448 in 2015, according to state demography estimates, is located in southern Rutherford County, adjacent to the county seat, Rutherfordton. Ruth does not have its own zip code but is still an incorporated town subject to state law.

Carolina Public Press has recently completed publication of a series of articles on the salary levels of elected officials and top-paid employees for each municipality, county and public school system within the 19-county Western North Carolina region. In preparation for those articles, CPP requested records from each government body.

The final article in the series covered smaller towns between 400 and 4,000 in population. Several towns contacted for the report never replied, as noted with an asterisk in the published article. But until Ruth’s response arrived May 2, none of the government entities contacted for any of these reports had refused or attempted to set preconditions on their compliance.

“I had to wait for board approval,” the original town of Ruth email told CPP. “The board stated if you want that information you need to come to a meeting (and) bring your credentials with you. If (you’re) interested in attending let me know (and) I’ll be glad to provide you with meeting dates, time (and) location.”

According to Martin, this response was legally mistaken on multiple levels.

“There is no need for ‘board approval’ for a town to fulfill a routine public records request,” she told CPP. “The personnel laws make crystal clear that salary information is public.”

The idea that a CPP representative would need to go to town in person, much less attend a meeting, is also contrary to what the law says, according to Martin.

“The public records law states that a requester may get information in whatever format he chooses, assuming it can be provided that way,” she said. “So there is nothing in the law that would permit a town to require a member of the public to come in person to a town meeting.”

The demand for credentials also suggests a chilling litmus test on access to records in a democratic system, making it difficult for the people to keep watch on how their government is being run.

While residents of smaller towns often assume the best about their leaders, experience has shown that this trust is not always well-placed. Just last month, two top officials in Tryon in Polk County, located just south of Rutherford County, faced federal arrest over alleged financial misconduct.

Following the appearance of the initial version of this article on May 3, the town provided salary information for its board members and town clerk. This article and the original salaries story have been updated to reflect this new information and the town’s eventual compliance.

Prior to the appearance of the first version of this article, the town was notified of its pending publication and informed of Martin’s legal advice. The town had not responded further at the time the article’s first publication on May 3.