Rivers Woodward grew up in a small town, but hadn’t planned on beginning his medical career in one. 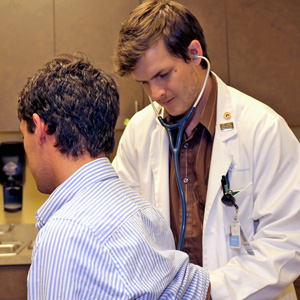 Rivers Woodward, seen here during his medical training at the Asheville campus of UNC School of Medicine in 2014, hopes to open a family medicine practice in the mountains after completing his residency. Photo courtesy of MAHEC

That changed when the Franklin native took part in an innovative program at the University of North Carolina’s School of Medicine that takes medical students interested in rural medicine away from the Chapel Hill campus to study in Asheville for their final two years of medical school.

Now Woodward, who received a medical and business degree this spring, hopes to open up his own family medicine practice in one of North Carolina’s mountain towns after completing his residency. He sees the WNC program, which is centered around patients and places students in long-term internships in rural clinics, as a template of how doctors should be trained.

The UNC School of Medicine’s Asheville campus not only gives students exposure to the challenges and benefits of practicing in rural areas early on, it’s also creating a pipeline where promising medical students end up putting down roots and practicing in Western North Carolina, said Dr. Robyn Latessa, the program director and assistant dean for the UNC School of Medicine- Asheville campus

“The whole problem in the United States is that we may have enough providers, but they’re unevenly distributed,” she said.

That’s the primary reason why state lawmakers carved out an additional $15.5 million over the next two years in this summer’s budget negotiations for the medical school’s Asheville campus, said state Rep. Chuck McGrady, a Hendersonville Republican and one of the House of Representatives’ main budget writers.

“Policy makers recognize that we have a shortage of doctors in rural North Carolina,” McGrady said. “This was a way of addressing that.”

Studies show that doctors tend to practice where they study and do their residencies, said Dr. Jeff Heck, the president of the Mountain Area Health Education Center (MAHEC), which houses the medical school and other healthcare education programs

“We want to make sure, as much as possible, we’re training people who have a great chance of retention to rural areas,” Heck said.

The state money will not only increase the number of practitioners, but communities will be strengthened overall, he said.

“It’s an amazing gift and an amazing opportunity for any area like ours that has so many health care needs and is really desperate for more professionals,” Heck said the additional funding.

Woodward, the recent medical graduate, says the Asheville-based program gave him learning opportunities that may have been tough to come by, had he stayed in Chapel Hill with his classmates. He had close relationships with senior practitioners at nearby hospitals, and frequently reached out on slow days to see if there were any procedures he could observe.

While observing and doing clinical hours at a Spruce Pine clinic, he followed patients’ cases closely, with patients able to reach him directly with their questions, and soon found he was invested in the area.

“I really began to feel like I had a responsibility to that community,” he said.

The campus began in 2009 with just four students, and has 26 enrolled for the upcoming school year, she said.

The recent influx in state funding is part of a years-long plan to boost the numbers of medical providers in the rural, mountainous part of the state. Complementing the medical school at MAHEC are similar collaborative programs with UNC’s Gillings School of Public Health and Eshelman School of Pharmacy, as well as Western Carolina University’s nursing and nurse practitioner programs.

Those teaching those who plan to practice in rural areas need a different approach than what most medical schools offer, where many specialize early on and build their careers around specialties in surgery or other disciplines, Latessa said.

But rural practitioners tend to need to be generalists, with doctors treating a variety of ailments on a regular basis.

Some of the biggest holes in coverage are in family medicine, surgery and psychiatry, Latessa said.

That’s where the state money will come in, with plans to start up residencies in general surgery and psychiatry this year.

Sarah Ovaska-Few is a contributing state government reporter for Carolina Public Press. Contact her at sarahovaskafew@gmail.com.