In late August, the Asheville City Council voted to endorse a proposal for land that could become Buncombe County’s only federally designated wilderness, in the Craggy Mountains and Big Ivy watershed. 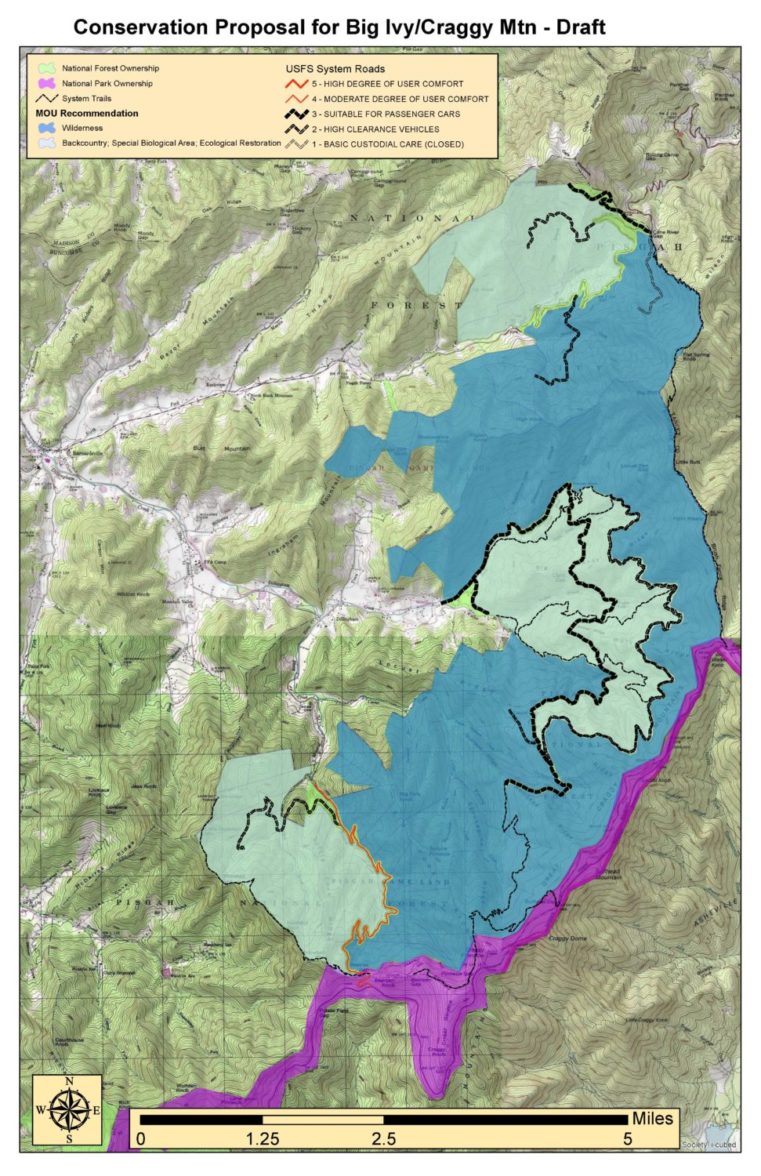 The council passed a unanimous resolution supporting a recommendation from wilderness advocates that some 7,000 acres of National Forest land in Buncombe County receive the highest form of land protection in the U.S. The Buncombe County Commission also passed a similar resolution favoring wilderness in September 2016.

“These particular resolutions have incredible importance for the forest plan revision,” said Will Harlan, co-organizer of the Friends of Big Ivy, an organization dedicated to protecting the Big Ivy section of the Pisgah National Forest.  “The public has have been overwhelming supportive of permanent protection.” He said the resolutions are particularly weighty since a large percentage of Western North Carolina residents live in Buncombe County.

The two pro-wilderness resolutions are among more than a dozen non-binding resolutions passed by counties and municipalities throughout Western North Carolina — the majority of which oppose the addition of wilderness designation on federal forest land in the region.

Each resolution was considered during the Pisgah-Nantahala forest plan revision. Among the four national forest units in North Carolina, the two western forests — Pisgah National Forest and Nantahala National Forest — are guided by a single land-management plan. Federal law requires a revision of the management plan every 15 years. The current plan revision process began in November 2012 and will eventually replace the existing plan, which was approved in 1994.

The Asheville City Council resolution comes at a noteworthy step of the revision process. Michelle Aldridge of the Forest Service said that, while the agency will continue to accept input from the public during this phase of the planning process, comments that were delivered by the end of September are most useful in the development of the draft Environmental Impact Statement, which is due to be released next spring.

Big Ivy is a community and watershed west of the Blue Ridge Parkway in northern Buncombe County that includes roughly 14,000 acres of federal land. Wilderness advocates say that the Big Ivy is one of the wildest and most ecologically significant portions of Pisgah National Forest that includes nearly 3,000 acres of old growth forest. Harlan said the wilderness recommendation will not affect any current uses of Big Ivy, such as mountain and horseback riding, hunting, and fishing.

Harlan said that in February 2015, at the request of the Friends of Big Ivy, representatives of the U.S. Forest Service attended a meeting to answer questions about two proposed management schemes that was interpreted as leaving a large portion of Big Ivy vulnerable to future timber harvesting. Harlan said that several hundred people attended the meeting.

Among the public land in the watershed, the 2,380 acre Craggy Mountain Wilderness Study Area (WSA) was designated by the U.S. Congress in the North Carolina Wilderness Act of 1984 and signed into law by Ronald Reagan. WSAs are lands that have wilderness characteristics, but have not received full designation by Congress. Legislation to designate the area as wilderness failed in the U.S. Senate in 1990.

At part of the of the national forest planning process, the future land management plan will recommend areas to be included in the National Wilderness Preservation System (NWPS). According to the Forest Service, areas recommended for wilderness in the forest plan or designated by Congress as WSAs are managed to maintain their wilderness characteristics. The Friends of Big Ivy and other wilderness advocates have proposed to the forest service that 7,000 acres in the Craggy Mountain WSA and Big Ivy be recommended for permanent wilderness status and 3,500 acres be managed as backcountry. Permanent protection in the NWPS requires an act of Congress and signature of the president.

The resolutions passed by the Buncombe County Commissioners and the Asheville City Council are among the three in favor of wilderness proclaimed during the planning revision process. The Town Council of Franklin passed a resolution to support additional wilderness in Macon County.

While the Forest Service is required to manage public forests for multiple uses ranging from recreation to water quality, no issue has drawn more ire in the multi-year planning process than the possibility of future wilderness designations. In all, anti-wilderness resolutions have passed in a dozen counties and have been cited as justifications for proposals by U.S. Senator Thom Tillis and U.S. Congressman Mark Meadows that would impact how wilderness is designated in the Eastern U.S. County leaders have said restrictions in wilderness areas would impact their residents ability to use the forest for economic and gain and traditional forest recreation and use.

Among the most vocal opposition to wilderness designations are members of the Fish and Wildlife Conservation Council, a grassroots organization comprised of sportsmen who desire the inclusion of more flexible forest management techniques to benefit game species, techniques that would be restricted in areas managed for wilderness or wilderness characteristics.

David Whitmire, the chair of the organization, told CPP in June 2017 that he believes counties are at the “essence of our communities and how we interact with our forests.” He said his organization is willing to back additions to the wilderness base, but only under the condition that the recommended designation receive a thumbs up from the local counties.

From an ecological perspective, district biologist Chris Coxin of the National Wild Turkey Federation said his organization takes a stance in line with the North Carolina Wildlife Resources Commission which favors “backcountry,” an option that allows a greater range of forest management techniques than are allowed in wilderness areas. While Coxin has attended meetings of the FWCC, he is not a member.

“Wilderness designation is a management decision; the forest will likely become more mature and turn into a more closed canopy forest,” he said. That does not benefit species such as turkey that depend on an open canopy and young stands of forest, Coxin said.

Sam Evans of the Southern Environmental Law Center understands the concern with adding wilderness designation to remote lands of Western North Carolina, but said that the Wilderness Act, passed in 1964, was designed to transcend local politics.

“County positions on wilderness, more than anything else, are a litmus test for one question: is the current forest plan working for us? Many counties have felt that their other needs aren’t being met, and opposition to designation is a way to say we don’t want to lose access to places we are connected to,” Evans said.

“It‘s easier to say no to wilderness than to say yes; often the fear of wilderness is that it’s a permanent designation. You have to be pretty sure you want it. I’m hopeful that counties that have passed (anti-wilderness) resolutions are going to see the advantage to their economies that they have a diversified portfolio of both managed and wild lands.”

Jill Gottesman of The Wilderness Society said the Asheville and Buncombe County resolutions were supported by a broad group of people from the community and are an successful example of collaboration.

“There’s a vision for the area surrounding at which is a center for all different types of uses, not just wilderness, but it includes what so many people love about the area. Everyone that goes to Big Ivy were able to voice their opinion and see a piece of what they love about the area in the proposal,” Gottesman said.

Harlan said none of the county meetings in which anti-wilderness resolutions were passed were as well attended as the Buncombe County and Asheville meetings.

CPP found that in several counties the sessions in which resolutions were passed were conducted in normal public session during the normally scheduled commission meeting. Passage of a non-binding resolution does not require any substantial notice, since it carries no statutory weight and no public hearing is required.

Despite the political and public support for additional wilderness in Buncombe County, Harlan believes that the Forest Service has an institutional bias towards creating a land management plan that maximizes their flexibility to manage forests — a task restricted by wilderness designations. He also said the wilderness evaluation of the Craggy Mountain study area was flawed. The 10,653-acre Craggy Mountain region was one of 53 areas inventoried in 2014 by the forest service that may be suitable for inclusion in the National Wilderness Preservation System.

While Harlan said the forest service’s Craggy Mountain evaluation summary acknowledges some of its wilderness characteristics, he said the analysis implied the area is not suitable for wilderness.

“This is about way more than Big Ivy,” Harlan said. “This is a test case for the entire forest planning process. If the public’s comments and overwhelming support for the area are completely ignored then the (planning revision) process is flawed. There is zero opposition to these resolutions to a wilderness in Big Ivy. This is our back yard and we feel that our voice hasn’t been heard.”

In its wilderness evaluation summary for the Craggy Mountains area, the Forest Service wrote:

“Northern and central portions of the Craggy Mountains area contain features that detract from wilderness characteristics of naturalness, solitude and primitive recreation, including open roads and maintained wildlife fields. Open roads, wildlife fields and mountain bike trails divide the area into small areas of insufficient size to manage for wilderness characteristics; however, the Wilderness Study Area as designated by Congress retains a degree of wilderness characteristics; as does the Locust Ridge area immediately north of the Wilderness Study Area. The area east of NFSR 74 is contiguous with the Blue Ridge Parkway, the Big Tom Wilson Preserve, Mount Mitchell State Park, and the Asheville Watershed, all of which are protected areas.”

Aldridge said the Forest Service recognizes the range of opinions regarding additional wilderness in WNC. This past summer, six additional public meetings to gather public comments were held throughout the region, with 425 people attending. Forest Service officials have met with local governments to gather input about the forest plan.

This fall and winter, she said, the Forest Service will use the information and comments to build a range of management plan alternatives, including wilderness recommendations, and analyze the ecological, social, and economic effects on the forest. Next spring, the forest service will share their analysis in the form of a draft Environmental Impact Statement (EIS). Following a 90 day comment period, the forest service will work to finalize the management plan and EIS. Aldridge said a final management decision is expected in mid-2019.