There’s perhaps no other species of plant in North Carolina as recognizable as the Catawba rhododendron. Its shiny leaves and gorgeous blooms are ubiquitous throughout the North Carolina mountains. 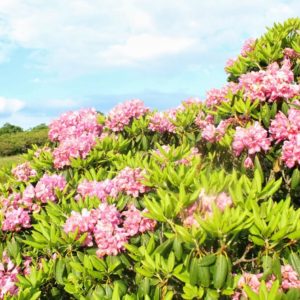 Rhododendron may be beautiful along high slopes in the WNC forests, but they’ve spread there from their natural river-bank habitats due to climate change. Highly flammable, they increase the risk of wildfires. Jack Igelman / Carolina Public Press

Yet the familiar shrub isn’t necessarily beloved by experts concerned about the uncertain impact of climate change on the forests of Southern Appalachia. Its shallow root system can easily conquer and dominate steep slopes where other trees and plants struggle to gain a foothold after a fire, landslide or other natural or human disturbance. That’s one reason tangles of rhododendron cover mountain slopes from waterways to ridge crests.

Senior geologist for geohazards Rick Wooten of the NC Geological Survey in Asheville told Carolina Public Press that the combination of more dramatic rain events and the expansion of weakly rooted species can destabilize mountain slopes.

“Healthy forests hold the soil in place,” Wooten said. “Deep-rooted trees contribute more to slope stability. What concerns me about climate change is, if there are more frequent storms that result in more intense and prolonged periods of rainfall then we can expect an increase in flooding and landslide activity in the mountains.”

But landslides are just one of an array of the possible effects of a changing climate on one of the most biodiverse and complex forest ecologies on the planet. There’s also the spread of invasive plants, pests and animals; difficult to predict rainfall and drought patterns; and the threat of more frequent and damaging forest fires.

“You can see the direct impact of climate change on our ecosystem services and how they change in response to a variety of threats; they’re all inter-related in this complex system,” said Jim Fox, director of UNC Asheville’s National Environmental Modeling and Analysis Center based at the Collider in downtown Asheville. “We’re seeing a different reality in our forests.”

Those prospects have captured the attention of Wooten, Fox and other experts who are attempting to understand the near and long-term effects of climate change on Western North Carolina’s forests.

Of course, warmer temperatures and changing rainfall patterns are beyond the control of forest managers. Planner Michelle Aldridge of the U.S. Forest Service said  developing strategies to respond to the impacts of climate change is a building block of the draft Pisgah-Nantahala National Forest Management Plan, which addresses the long-term health of the forest.  Currently the Forest Service is revising the plan, which is slated to be finalized in 2019. A draft plan and a draft environmental impact statement are expected to be released next spring.

“Climate change has the potential to influence biodiversity, forest health, water resources and even recreation in the national forest,” Aldridge said. The agency’s aim is to apply the best available science to understand how climate change influences the ecological integrity of the forest, she said. Among their available tools to address the threats of climate change is TACCIMO (Template for Assessing Climate Change Impacts and Management Options), a web-based application designed to connect land managers with updated peer-reviewed science about managing healthy forests.

Fox said his organization has collaborated with the Forest Service on several projects that use climate and weather data, maps, and satellite imagery to understand how the wooded landscape of WNC is changing over time. For example, NEMAC is a partner in developing the Landscape Dynamics Assessment Tool (LanDAT) designed to help resource managers analyze landscape and forest changes using satellite imagery.

“We can look at areas smaller than a football field to see where trees are stressed, where forests have burned and what plants are replacing them,” he said. “We also have 15 years of data to see how forests are changing through time.”

“You have a natural system already stressed by land-use changes, invasive plants and insects, and population growth,” Fox said. “The worry is all of these things coming together and adding climate variability on top of it.”

While their climate data and tools may be useful, Fox said it requires people with the expertise to apply it. “Our role is to provide climate information at the right scale and the right tools for local forest managers to integrate into their planning and management,” he said.

While some forest plants and animals may thrive despite an unpredictable climate future, Southern Blue Ridge stewardship project manager Adam Warwick of The Nature Conservancy said that species that depend on specific growing conditions may be in peril. The impact of climate change may be most evident, he said, in high elevation habitats, such as spruce-fir forests, or other environments that have unique micro climates, including mountain bogs.

“The spruce-fir forest have a diverse set of species that have adapted to colder high-elevation micro climates,” he said. The strain of higher temperatures and long, dry periods can make the trees that live above 4,500 feet more susceptible to insect outbreaks or disease. Warwick said that Southern Appalachian bogs are dependent on groundwater and harbour a rare set of species, such as the mountain sweet pitcher plant that can only thrive in a narrow set of growing conditions which can be altered by variations in rainfall and temperature.

“If we have lower water tables, then you start to get competition from other species, so we’ll have to work harder to nurse these unique islands of habitat,” Warwick said. “They will have a tougher time surviving. If these rare species disappear, then we lose part of our biodiversity.”

To adapt, Warwick said that more hands on management is necessary to keep pioneering species out and the rare species in.

In fact, one of the goals of the Pisgah-Nantahala forest management plan revision process has been to define forest-wide strategies to manage the national forests, after a lack of oversight has allowed the forest structure and composition to change dramatically over the past century. While there have been plenty of clashes among forest advocates and users in the planning process, one thing most can agree on is that suppressing wildfire has been a major force in altering the ecological composition of WNC’s forests.

“We have some of the largest relatively unfragmented swaths of forest land on the east coast, but there are certain forest types that are ecologically out of whack,” said Warwick, including the highly flammable rhododendron that has spread from areas near rivers where they belong to slopes and ridges where they provide fuel for fires, making blazes far more dangerous and destructive.

In 1915 the North Carolina General Assembly authorized the first state fire wardens to fight fires and clear brush along rail lines to keep sparks at bay and to protect forests that were prized for their timber value. In 1935, the U.S. Forest Service developed a so-called “10 a.m. policy” which mandated fires be snuffed by the next morning. However, research in the 1960s and 1970s led to a shift in Forest Service policy to a “let-burn” policy. While forest managers now generally view fires as vital to the health of a forest, state forest managers are still mandated to suppress wildfires to protect people and property.

Wooten of the NCGS said his agency is cooperating with the U.S. Geological Survey, the forest service, and Chimney Rock State Park to study the stability of steep slopes affected by last year’s wildfires. In 2016, 51 wildfires burned over 50,000 acres throughout the mountains.

“It’s a big concern if we have recurring seasons of drought-related wildfires followed by active hurricane seasons where storms track over the mountains,” Wooten said. In 2004, for example, the remnants of Hurricanes Frances and Ivan passed through the region, triggering more than 400 landslides.

While extreme weather events and fires have a glaring impact on the forest, there may be less evident, yet just as worrisome threats to the forest.

In addition to the spread of rhododendron, the absence of fire and warmer growing seasons have also allowed other tree species that tend to require more water, such as the fast-growing tulip poplar, to colonize forests and dominate the canopy in place of trees that process moisture more efficiently, such as oak.

“That’s a large quantity of water we’re talking about when that trend is pervasive across 1 million acres of national forest. If you couple that with increased drought, there’s less water coming from the forest,” Warwick explained. “When you consider how many people are moving to the region and that Asheville and Charlotte get their water from (rivers that rise in) the national forest, then forest health is definitely a human problem too.”