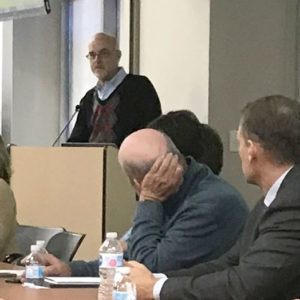 The suit, which the county filed Tuesday in the federal court for the Western District of North Carolina in Asheville, lists some of the largest prescription drug manufacturers and distributors in the world as defendants.

Attorneys for the county claim that drug makers like Purdue and Johnson & Johnson are responsible for investing millions of dollars in a fraudulent marketing scheme that downplayed the addictiveness of opioid painkillers, such as OxyContin; of funding third-party advertising efforts that promoted the drugs in an effort to sidestep federal regulators; and of paying doctors who were friendly to the companies to promote their efforts and their products.

Attorneys said the companies “aggressively pushed” their drugs to doctors with the goal of “(turning) patients into drug addicts for their own corporate profit.”

Commissioners expressed a united determination to do their part to stop the opioid epidemic in Buncombe County, as the spoke Tuesday afternoon at a press conference.

Vice Chair Ellen Frost said the proliferation of prescription drugs throughout the county is “the biggest attack on our community” that she’s seen during her time as a commissioner. Commissioner Al Whitesides described a meeting with constituents at which he talked with a mother and father who had recently lost a daughter to an opioid overdose. Commissioner Joe Belcher spoke about the funeral of a 21-year-old woman at his church who died of an overdose.

Dr. Blake Fagan, a physician who serves as the assistant director of the Family Medicine Residency Program with Mountain Area Health Education Center in Asheville, also spoke at the press conference. He said pharmaceutical companies told doctors for years that opioid drugs were an appropriate treatment for chronic pain and weren’t habit-forming.

“These medicines are not as safe as they said they were,” he said.

The county is seeking damages related to public expenses for medical treatments for overdoses and deaths, counseling and rehab, caring for children who have had to enter the foster system because their parents are addicted to drugs, caring for infants born with withdrawal symptoms, economic losses and law enforcement costs.

The suit did not name a dollar amount that the county is seeking from the defendants and Mike Fuller, an attorney representing the Dallas, Texas, law firm Baron and Budd, was cautious about naming a specific dollar amount or a time frame in which the lawsuit might come to a conclusion.

The suit says the defendants have created a public nuisance by their alleged complicity in the opioid epidemic and of engaging in negligence and neglect, misrepresentation, violations of the North Carolina Unfair and Deceptive Trade Practices Act, civil conspiracy, fraud and fraudulent misrepresentation.

The suit also claims the companies have violated federal racketeering statutes that are typically used to prosecute organized crime gangs. The lawsuit accuses the companies of coordinating efforts between manufacturers and distributors to ignore suspicious orders for drugs and to conceal this coordination from federal agencies. The suit describes a culture of closed-door meetings and private trade associations where drug companies meet to discuss the best ways to subvert the monitoring system for prescription opioids.

The suit says the sale of opioids has become wildly profitable for companies like Purdue over the past two decades, when the companies convinced physicians that opioids were an appropriate treatment for chronic pain rather than prescribing them primarily for end-of-life care and short-term severe pain, as was historically the case.

Those rising sales have been accompanied by a rising human toll. The Centers for Disease Control and Prevention reported that there were 64,000 overdose deaths in the U.S. in 2016 and said in 2011 that fatal overdoses had tripled since 2001. In North Carolina, 12,000 people died from overdoses from 1999-2016. Those deaths cost the state $2.1 billion in 2016, according to the lawsuit. From 2004-2015, hospitalizations of newborns with withdrawal symptoms increased 902 percent in North Carolina.

Buncombe County has been hit particularly hard. Emergency room visits related to opioids increased 173 percent from 2016 to 2017 and the county reported 230 overdoses in the first eight months of this year. In 2015, the county had a prescription rate of 88.5 prescriptions per 100 residents, which amounted to 68 pills per person per year. The suit also alleges that 70 percent of Buncombe County foster children enter the system because one or both of their parents struggle with drug addiction.

Baron and Budd, which represents the county in the case, is engaged in several other similar federal lawsuits against opioid manufacturers and distributors, including cases filed by public officials in Louisville, Kentucky; Birmingham, Alabama; Cincinnati, Ohio; and seven other Ohio counties.

In North Carolina, Wilmington and New Hanover County are considering a similar suit, according to news media reports. The law firm is representing Buncombe County on a contingency basis, meaning the law firm would receive its fee from any damages the county receives in the case. Commissioners confirmed on Tuesday that had agreed with the lawyers on a 30 percent of any awarded damages as the their fee.

Many of the companies named the Buncombe County lawsuit are also the subjects of an investigation led by Attorney General Josh Stein in conjunction with several other states.

Stein’s office announced Sept. 19 that he is seeking documents from the companies “to evaluate whether the manufacturers and distributors engaged in unlawful practices in the marketing, sale and distribution of prescription opioids.”

Stein’s investigation mirrors many of the allegations Buncombe County has made, including “the possibility that patients and doctors were misled about the addictive nature of these drugs” and “whether (distributors) fulfilled their duty to raise red flags about pharmacies’ suspicious drug orders.”

While the state Department of Justice isn’t a party to the Buncombe County lawsuit, the county does have Stein’s support, according to DOJ spokesperson Laura Brewer.

“We support local governments’ efforts and are staying in close touch with them as we investigate, and we encourage them to do the same,” Brewer said in a Tuesday email to Carolina Public Press.