Amidst the concern over rural hospitals closing in North Carolina and across the U.S., a recent study reaches the somewhat controversial conclusion that not every rural Critical Access Hospital (CAH) is necessary. 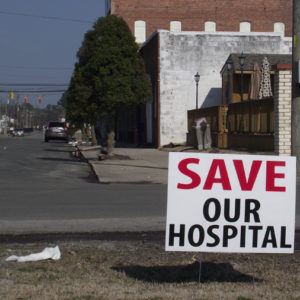 After speaking to health experts in seven Midwest states, researchers at the Bipartisan Policy Center suggested that “communities should tailor available services to the needs of the community, which for many rural areas are driven by changing demographics.”

It’s true that the rural population is looking very different over time. It’s declining and aging, as younger generations move to more urban settings. Recently, one rural economist told lawmakers that the sparse population in the remote parts of N.C. can no longer support large full-service hospitals.

For example, Scotland Neck’s critical access hospital closed the doors to its emergency room, inpatient beds and other acute care services in December after 70 years in operation in the Halifax County town.

The hospital had been losing money for eight years. On an average day, only five people visited its emergency room and it no longer offered surgery or obstetrics services. The 20-bed hospital had between two and three admissions per month.

It’s never just one thing that closes down a rural hospital, but a combination and Scotland Neck’s situation was not uncommon.

The hospital had trouble recruiting physicians. The payer mix was mostly Medicaid, Medicare, self-pay and charity cases, which meant revenue didn’t meet the expenses of keeping the doors open. Private insurance has the best reimbursement rate, but that only made up about 6 to 8 percent of Scotland Neck’s patients. Meanwhile, the surrounding economy had declined.

The conclusion that not all CAH hospitals are necessary may sound like a “value judgment on what communities deserve,” said Mark Holmes, director of the Cecil G. Sheps Center for Health Services Research at UNC Chapel Hill. “At its core, the report recognizes that each community has a different set of needs and assets, and communities should think about what it is that would make the biggest difference in their community.

“For some, this may be a CAH, but others may benefit more from long-term care, or a specialty clinic, or a robust EMS system, such as community paramedicine,” Holmes said.

That’s what happened in Blowing Rock, where the old hospital, which closed in 2013, first became a post-acute care facility. More recently it was rebuilt as an assisted living, rehabilitation and skilled nursing center.

In Anson County, the old hospital in Wadesboro closed to become a multi-specialty clinic with an emergency room, pharmacy, short-term acute care beds and a helipad to move sicker patients to a larger hospital.

And in multiple rural hospitals, telemedicine is helping to fill gaps in care.

Holmes added that as policies, regulations and market trends continue to chip away at rural health care sustainability, it will be even more important to understand how to “innovatively deliver care in a sustainable, effective and efficient manner.”

But in Holmes’ prior research, he’s also noted that rural hospital closures are associated with a per capita income loss of between $703 and $1300 and an uptick in unemployment.

Study authors wrote that the people they interviewed for their project struggled to reconcile the idea that CAHs are not the best way to provide health care to rural patients and their concerns about closing a hospital and creating access issues for these communities.

Mike Stevenson, the CEO of Murphy Medical Center in the far western part of the state, has fought to keep the medical center open for 30 years.

Stevenson weighed in on the Bipartisan Policy Center’s conclusion about CAHs saying, “if you apply the financial test to services, then they are not justified. They cannot pay for themselves.”

“The critical question is, how do we have what’s truly needed in these communities to be there?” Stevenson said. “It’s a very interesting area of debate because there are probably too many hospitals in certain locations that couldn’t be truly justified, but who makes that ultimate decision?”

As he prepares for retirement, Stevenson announced that his hospital will merge with Chattanooga-based Erlanger Health Care in April.

He sees this as an opportunity for Murphy Medical Center to be knitted into a larger health care system.

“For a big hospital to take on a small one, if it’s to bail them out, that’s not a good long-term solution or that’s a very generous thing on the part of the big hospitals,” Stevenson said.

“[Hospitals] are big businesses and they make good business decisions and so most of the time they are not taking on a hospital just to bail them out. They might be helping it in different ways and in some way capital investments, but it’s more about how to get a system knitted together. It helps become a feeder to that bigger hospital.”

Editor’s note: This article was written by Taylor Knopf for NC Health News and is being reprinted by permission.