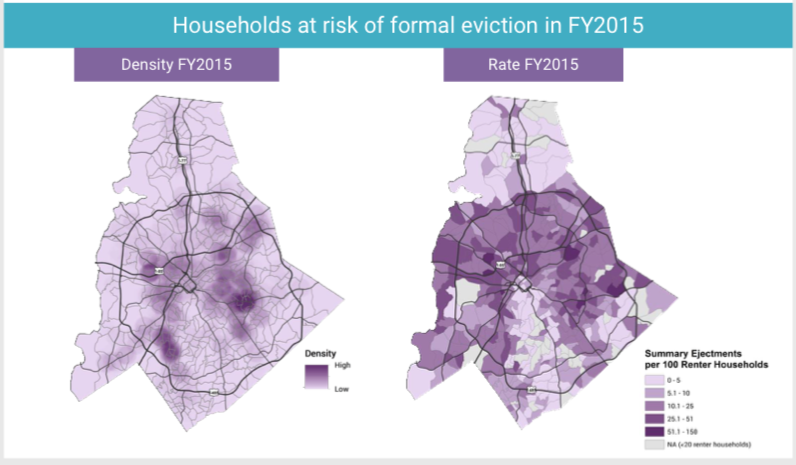 Charlotte and Mecklenburg County residents in neighborhoods with households receiving public nutrition assistance and with higher populations of children are more likely to be evicted from their homes, according to a newly released study.

It found that evictions are centered on several neighborhoods throughout the city that are also areas with higher rates of poverty, higher populations of African American residents and where gentrification is occurring.

The data shows that, since 2003, the number of areas where households are more likely to face evictions increased, and that those areas also shifted toward the edges of Mecklenburg County.

“Evictions occur in certain neighborhoods, and there’s a pattern to that,” said Courtney Morton, the housing and homeless research coordinator with Mecklenburg County Community Support Services. “Those neighborhoods are associated with other indicators related to economic opportunity, like where is wealth congregated.”

Results of a similar study in Durham suggest that the findings probably hold true in many major urban communities.

The 2018 report by the Durham Human Relations Commission on evictions in Durham County shows that the same indicators associated with evictions in Mecklenburg County were found there.

“Gentrification and eviction disproportionately affect lower-income neighborhoods,” the Durham study’s authors said. “It seems convincing that the rise in evictions and the simultaneous gentrification of low income regions are related.”

The Mecklenburg County study showed that, in 2015, eviction rates in seven neighborhoods where evictions appeared to be clustered were at least three times higher than rates for the county as a whole. Those clusters also showed higher populations of people of color, individuals under the age of 18 and lower median household income, compared to the rest of the county.

The study makes no claims about what happens to tenants or families once they’re evicted, but Morton said some of those tenants may wind up on the streets.

“We know, with the writ of possession, that those are the folks who actually move forward with the sheriff overseeing the padlocking of the unit,” she said.

“We don’t know where they go after that… Our assumption, from what we know from folks experiencing homelessness, is that it’s a matter of losing their housing like this that they actually become homeless.”

Two steps in the eviction process

The Charlotte researchers relied on data from the Mecklenburg County Sheriff’s Office, which records information related to the formal eviction process. Law enforcement first becomes involved in evictions when a landlord files a “complaint in summary ejectment,” which notifies tenants that they are at risk of eviction. A law enforcement officer then serves the tenant with the complaint.

If the situation remains unresolved, a court issues a “writ of possession” to formally evict the tenant, which gives the landlord the right to padlock the home and remove the tenant. If the tenant makes a payment to the landlord or otherwise rectifies the situation that led to the eviction process being initiated, the writ can be returned without being served.

“The writ of possession data are important because they reflect tenants who did not move out on their own during the 10-day waiting period or file an appeal,” the study says. “These families may not have moved because they lacked the means to do so or were unable to find another affordable and decent unit.”

Landlords in North Carolina can evict a tenant for one of four reasons — nonpayment of rent, tenants remaining in a unit past the expiration of a lease, the conditions of the lease are violated or criminal activity is occurring in the unit.

The study reflects data collected related only to the formal eviction process, rather than instances where a landlord simply asks a tenant to leave or increases the rent to a level that’s unsustainable for the tenant.

The study shows how rates and locations of evictions changed between 2003, prior to the Great Recession, and 2015. The data showed that filings for complaints in summary ejectment decreased over that time span, which “could possibly coincide with changes in the number of formal evictions or changes in tenant screening practices.”

The data shows that, both before and during the Great Recession, evictions were concentrated in an area east of Charlotte, near the intersection of W.T. Harris Boulevard and Albemarle Road.

By 2015, the rate of evictions had increased in other areas of the county within the Interstate 485 loop around the city. The researchers said that trend “reflects the continued suburbanization and overall development in the periphery of the county as well as the suburbanization of poverty.”

Evictions in 2015 were concentrated in areas in North, East and West Charlotte — neighborhoods that “have a larger share of renter households and are more racially and economically diverse than the areas with the lowest rates.” The researchers referred to the areas with the lowest rates of evictions as the “wedge” in south Charlotte between Ballantyne and uptown, as well as the suburbs in North Meck and the southeastern area of the county.

Researchers found that neighborhoods with those subsidies were less likely to be associated with summary ejectment filings because “subsidized housing decreases housing costs for families and, as a result, reduces housing cost burden and instability.”