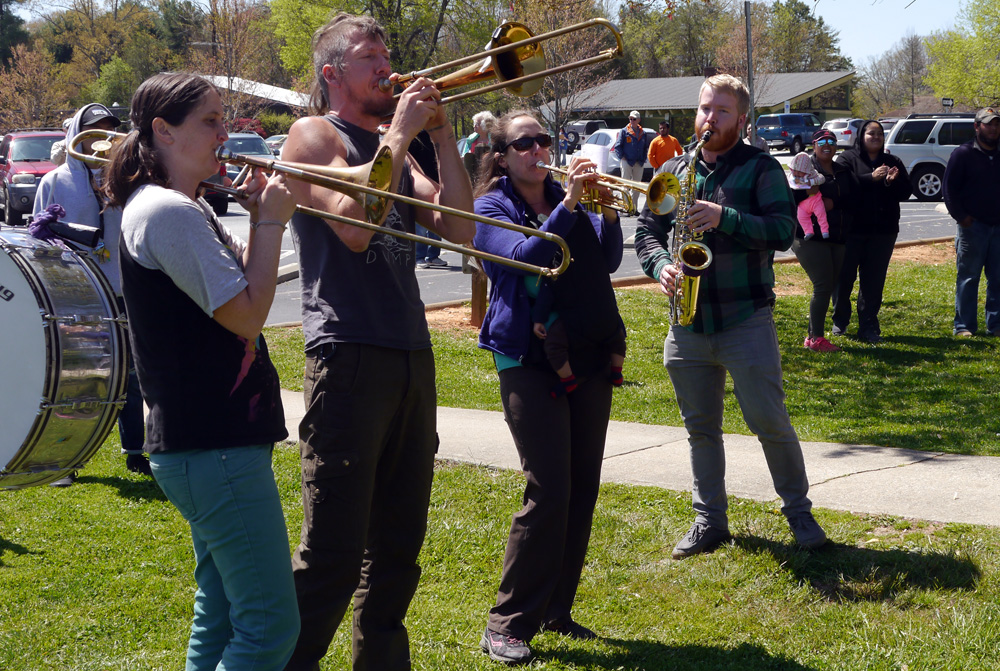 A gathering of federal agents for a picnic Friday at Jackson Park in Hendersonville attracted protesters voicing their displeasure over the recent string of immigration arrests in Western North Carolina. As agents ate their meals protesters played instruments, waved signs and shouted chants. Photo by Andrew Mundhenk of The Times-News of Hendersonville. Used by permission.

More than a week after the arrests of some 40 people in western and central North Carolina, additional accusations of improper behavior against federal immigration agents continue to stir tensions.

A lawyer claims agents refused to let him talk with his clients while they were being processed in Hendersonville on April 14.

Also in Hendersonville, immigrant advocates organized a protest at a public park on Friday where federal agents and members of local law enforcement were having a picnic.

In both cases, a spokesman for the U.S. Immigration and Customs Enforcement Agency responded with a version of facts or perspectives that challenged the statements made by those criticizing the federal agency.

Meanwhile, central North Carolina Congressman David Price, a member of the Homeland Security Appropriations Subcommittee, became one of the highest-ranking elected officials in the state to to condemn the arrests.

In the press release and an interview with CPP on Friday, Pappas said agents told him they were “not set up to do that,” when he asked to speak with his clients.

Pappas said privacy rules in immigration cases prevent him from naming the men to the press, but he said they were not facing criminal charges. ICE has previously said the recent arrests targeted individuals with criminal histories, including people who had re-entered after previous deportations, but that the agency cannot “turn a blind eye” when it finds anyone unlawfully in the country, so some detainees did not have previous records.

According to Pappas, his clients were only accused of unlawful residence in the United States, a violation of civil rather than criminal law and one that remains unproven.

“The response by ICE is a violation of basic due process protections afforded to all people in the United States – the right to speak to their lawyer,” Pappas’ statement said.

ICE spokesman Bryan Cox pointed out that the processing in Hendersonville did not take place at an ICE detention center, where meetings with attorneys typically occur.

“Upon arrival at an ICE detention center, ICE’s Performance Based National Detention Standards cover all aspects of detention, to include access to legal counsel and attorney visitation,” Cox said.

“Any claim that ICE denies individuals access to legal counsel is false.”

“The fact that ICE does not have a so-called detention facility in Hendersonville, N.C., is no excuse in preventing a attorney (from having) five minutes of access to his clients,” Pappas said.

“Moreover, for the record, the ICE supervisor asked what I needed to ask my client about, another clear violation of the attorney-client confidentiality. Mr. Cox’s reply is unacceptable. I was within 20 feet of my clients and I could not speak to them, even through a fence at (ICE’s) Hendersonville office. At the time of my visit, my clients were not in transit, but situated inside an ICE office.”

Pappas also noted that many immigration detainees in Western North Carolina are taken to an ICE detention center more than seven hours away, in Lumpkin, Ga.

He has filed a federal lawsuit over ICE practices at that facility related to the rights of his clients to interact with their legal counsel, Pappas said.

On Friday, the Asheville-based organization Compañeros Inmigrantes de las Montañas en Acción (CIMA) called on social media for protesters to converge on a public park in Henderson County where federal agents and local law enforcement were conducting a “celebratory picnic” following the arrests.

“This is such an insensitive and inhumane expression of celebration in the face of such deep community drama,” CIMA Coordinator Bruno Hinojosa said in a statement posted to Facebook.

“Witnessing this event is not meant to be a confrontation or direct action, but an opportunity to peacefully gather and demonstrate (Western North Carolina’s) collective pain and organized resistance. We will not confront or attack these people but merely show them there are real people on the other side of their actions. We do not find this horrific week worth celebrating.”

ICE spokesman Cox strongly rejected CIMA’s characterization of the gathering as “celebratory” and denied any connection between those who attended and the recent arrests.

“The allegation is false,” Cox said. “Homeland Security Investigations (HSI) had a long-planned event … with U.S. Attorney staff and other local law enforcement partners. HSI is the criminal investigative division of ICE; HSI had no role in the actions last week by an entirely separate division of ICE known as Enforcement and Removal Operations (ERO).

“These persons are special agents who conduct federal criminal investigations, they are not deportation officers.”

Individuals who participated as well as some area media later posted images from the protests, which included performers with brass instruments and a bass drum serenading the picnic. At least one protester waved a sign saying, “Deport white people.”

Cox, who has previously criticized some of the claims being made by organizations like CIMA, reiterated his concerns.

“The description given to you (about the picnic) is simply wrong,” he said. “It’s also another instance of irresponsible misinformation that does a disservice to the community these groups claim to represent.”

CIMA has not responded to several requests for comment.

In Carrboro, U.S. Rep. David Price made an appearances at the offices of the immigrant advocacy organization El Centro Hispano, according to a report from the Herald-Sun of Durham.

“I’m upset with the raids, the detentions that have occurred,” Price said. “If we’re going to prioritize enforcement of detention, deportation – immigration enforcement – that needs to be focused on people who pose a danger to the communities, who committed serious crimes,” Price said.

ICE spokesman Cox has previously said criminals were the focus in the ICE actions that resulted in the recent arrests, but that some collateral arrests occurred when agents identified those in the country illegally.

The Herald-Sun noted that Price’s U.S. House subcommittee helps set the budget for immigration enforcement. Previously, city officials in Durham, Chapel Hill and Carrboro had condemned the Central North Carolina arrests, as have elected officials in Asheville and Buncombe County in the west.

CPP reported last week on allegations related to students staying home from school due to fear of immigration agents and that agents were staking out bus stops. Cox has denied that agents target either schools or bus stops.

Although school officials in some central North Carolina counties also told CPP that they had heard rumors about ICE fears that might be leading students to stay home, the rumors appeared sharpest in the Asheville area, where one assistant principal joined other school staff in escorting elementary students home last week.

At the request of CPP, Buncombe County school officials took a look at absentee patterns to see whether any evidence of large-scale absences had occurred. The evidence they compiled suggested this rumor was unfounded, though it may have been based on real fears.

CPP also reported last week on a photo that had been posted to social media showing an alleged ICE vehicle stationed near a school bus stop near Weaverville. CPP talked about the photo with Buncombe County commissioners, who had played a role in bringing the image to public attention.

Commissioner Jasmine Beach-Ferrara later explained the circumstances of the photo to the best of her knowledge.

“I have learned that the picture was posted originally on the Facebook page of CIMA,” she said. “Community members recognized the vehicle in the photo from another location where it had been verified as ICE by advocates who reported seeing ICE agents in the car. This system is one way people try to assess safe locations.”

Cox said last week that without a license number he could not be sure whether the vehicle belonged to ICE, but that the agency does not target school bus stops. Even so, he said the agency also does not know where all the school bus stops are located, so agents could have been there without doing so deliberately.