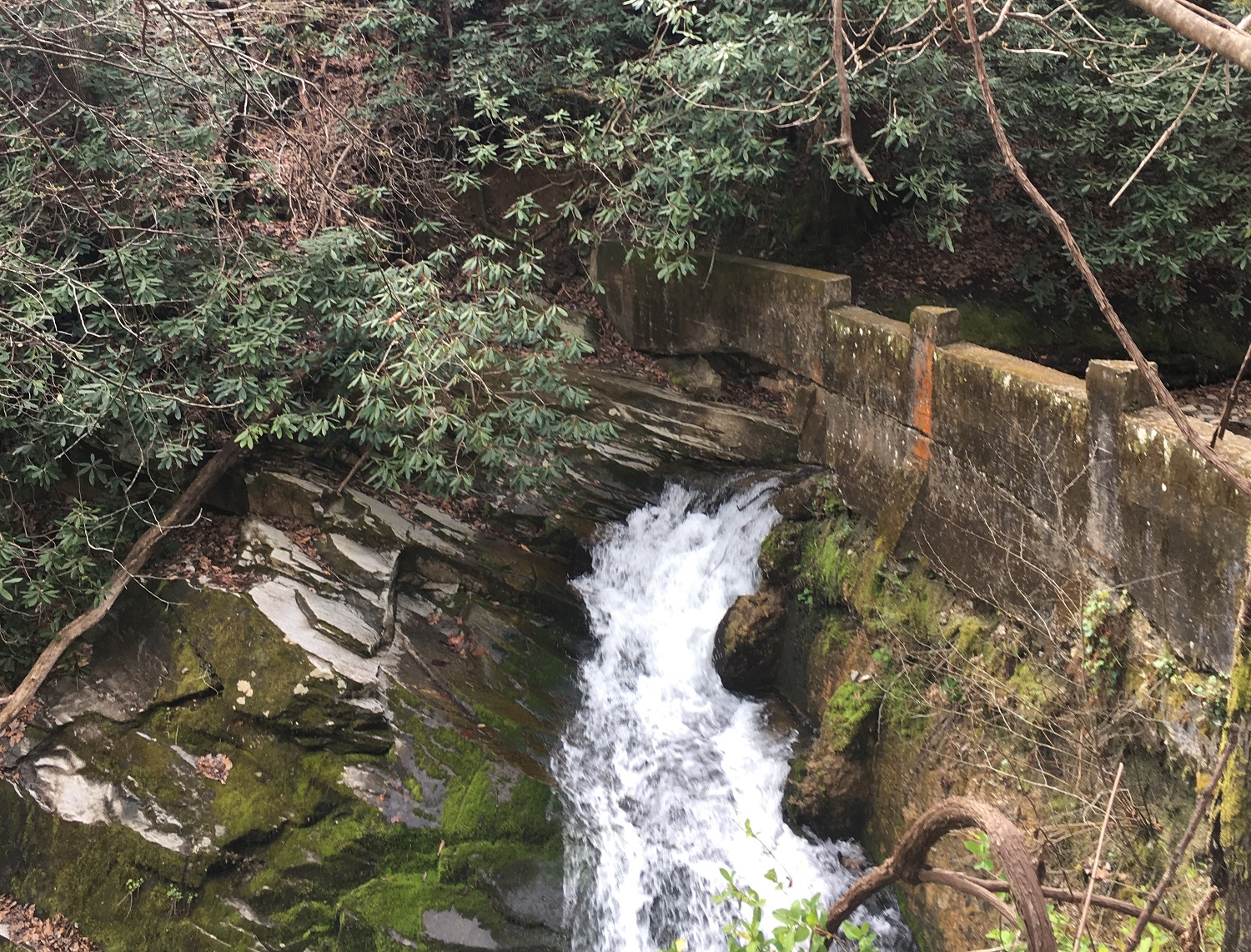 The Catawba River near its mountain headwaters in the Pisgah National Forest flows through an aging dam. Angie Newsome / Carolina Public Press

A major sewage spill in Charlotte this week led to an estimated 15.4 million gallons of sewage escaping, potentially flowing into creeks that feed the Catawba River at Lake Wylie, according to media reports.

The Fort Mill Times in South Carolina described concerns from Catawba Riverkeeper Sam Perkins that residents should stay out of the lake for the first 48 hours after the spill.

With the Catawba providing drinking water to communities throughout both Carolinas, utilities downstream described preparations to adjust water treatment if necessary.

The spill, caused by a falling tree on an eroding bank that hit a sewer pipe, is an isolated incident that will likely have limited long-term effects on public health and the environment.

But the situation points to the fragility of the vital artery that is the Catawba.

Rapidly growing populations have increasingly come to rely on the Catawba at the same time that this population spike threatens the river’s continued health.

American Rivers, a Washington-based environmental advocacy group, featured the 225-mile-long Catawba River as one of America’s top 10 most endangered rivers in 2013. It was the waterway’s third time on the list since 2001.

The group releases its America’s Most Endangered Rivers Report to highlight rivers it deems to be among the most at-risk in the U.S. in a given year. The Catawba was fifth in the 2013 report because of threats from coal ash pollution and concerns about drinking water and access to recreation.

The ranking, said Peter Raabe, the North Carolina conservation director of American Rivers, has helped his organization bring attention to how the Catawba River is used and managed and to build a case for why people should care. Currently, he said, there’s growing interest in the river system and more collaboration among organizations dedicated to improve how they protect rivers, watersheds and water supplies.

“Is the Catawba better than it was in the ‘70s, 80s, and 90s? Absolutely,” Raabe said. “But … how the region manages future growth and development is important and could mean the river gets better or it gets worse.”

Whether the condition of the river improves is particularly meaningful to residents in much of North Carolina, since the Catawba and its 5,000 miles of waterways provide water for electricity and drinking to millions. It also supports agriculture, serves as a recreational hub and is the centerpiece of the region’s ecology.

Portions of the Catawba no longer resemble a river. Its headwaters drop from the mountains and into a chain of seven lakes in North Carolina. Six of those lakes were formed between 1906 and 1928 to power the industrialization of the Catawba valley, including the once-booming textile and furniture industries.

The seventh, Lake Norman near Charlotte, was created in 1963.

In South Carolina, the Catawba changes its name to the Wateree and flows through four more reservoirs before reaching the coastal plain.

The concentration of power facilities on the Catawba River was one of the reasons the Union of Concerned Scientists labeled the Catawba River Basin as one of America’s 25 most stressed river basins in which power plants are the major driver of stress.

“The amount of water that’s used is something (that), as a community, we need to get on top of,” she said.

According to her organization, power generation accounts for the largest net loss of water in the river basin.

Raabe added that building dams also has a major impact on the river’s ecology.

“When you build a dam you totally destroy its function as a river,” he said. “Just a small change in the oxygen level, for example, impacts bacteria and nutrient levels; it becomes a totally different ecosystem.”

While the dams may not be going anywhere, Raabe said there’s a broad coalition of organizations whose priorities include conserving the river, from the utilities that extract water for consumption, industry, environmental groups, and Duke Energy.

While Duke has received plenty of bad press related to coal-ash pollution, Raabe said the energy producer has been willing to listen to the needs of the environmental community on a range of issues.

“We take our role as stewards of the Carolinas’ natural resources very seriously,” said Kim Crawford, a Duke Energy spokesperson. The power company, she said, has worked extensively with stakeholders to identify lands for conservation in the Catawba River basin. For example, in April, 2,561 acres of land along Johns River, a tributary of the Catawba flowing through Burke County, was transferred to the state of North Carolina.

Syrewicze agrees that Duke Energy has done much good for the region. “They employ thousands, give charitably, and provide a vital service to millions. And they do it well,” she said.

“However, it doesn’t mean they shouldn’t answer to what they haven’t done well,” Syrewicze said, noting particularly their handling of coal-ash waste.

Currently, the Catawba Riverkeeper Foundation is involved with litigation against Duke Energy to clean up coal ash at two sites on the Catawba River: Plant Allen on Lake Wylie and the Marshall Steam Station on Lake Norman. The method of remediation proposed by Duke Energy is inadequate, Syrewicze said.

Crawford responded that Duke Energy has spent more than $5 billion in the Carolinas to permanently close all coal-ash basins in a safe, environmentally sound manner, by recycling the ash when feasible. “We’ve managed coal-ash consistent with regulations and industry best-practices,” she said.

Soaring population along the Catawba

Direct engineering and use of the Catawba aren’t the only threats to the river system.

Among the most pressing challenges is adapting to the region’s booming population, Syrewicze said. Charlotte is America’s third fastest-growing city.

In 1976, the 10-county region around Charlotte had 89,000 acres of property developed, she said. By 2030, 1.7 million acres of development are expected and the population is predicted to rise by 47 percent. 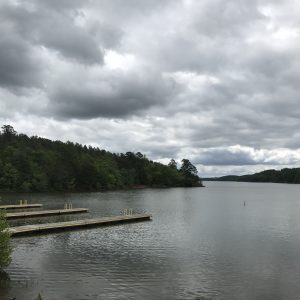 “In the greater Charlotte region we’re losing about a 130 acres per day of natural space to development. If one inch of rain falls on one acre of forest it’s evenly absorbed, but one inch of rain on an acre of parking lot produces 27,000 gallons of stormwater runoff.”

The stormwater, she added, has a direct impact on water quality and increases sedimentation in reservoirs. Another threat is runoff from improperly stored waste at industrial farming operations, known as “concentrated animal feeding operations.”

Over time, the collection of dirt and other particles that settle at the bottom of lakes is costly. The US Geological Survey estimates that Lake Rhodhiss near Morganton has lost roughly one quarter of its capacity to sediment deposition. That may translate to higher production costs to provide safe drinking water and energy in the future.

“It’s not the development itself, but it’s the way we do it,” Raabe said. “We want to make sure that it’s done in the smartest and most sustainable ways possible.”

While much of the region’s growth is centered around Charlotte, Raabe said that land-use patterns and practices in the river’s headwaters are just as meaningful.

“If you mess something up there, then you’re having to deal with it all the way down the river,” he said.

A portion of Catawba’s headwaters are formed by numerous streams within the Pisgah National Forest.

The passage of the Weeks Act in 1911 gave the federal government the ability to purchase private land from willing sellers in order to protect the headwaters of rivers and watersheds. The first purchase in the East was an 8,100 acre parcel along Curtis Creek in the Catawba headwaters in McDowell County.

Still, much of the river’s headwaters flow from private land. The Morganton-based Foothills Conservancy of North Carolina (FC) is focused on conserving land in eight counties along the Blue Ridge escarpment, the foothills and Piedmont region – an area roughly the size of Connecticut.

Since 1995, the organization has conserved 54,000 acres through land acquisitions from willing sellers or through conservation easements. Their strategy has been to add to existing conservation lands by filling in gaps to connect public land units or to conserve land adjacent to protected forests.

“When we evaluate land for conservation, the first thing we look at is its watershed value,” said Foodhills Conservancy Executive Director Andrew Kota.

“What we are trying to promote is that conserving undeveloped forested landscapes in our headwaters will help protect our waterways from faster degradation. One of our primary goals is protecting water quality.

“All of these rivers feed drinking water supplies somewhere downstream. Forests are nature’s way to hold water in the soil and vegetation and to prevent it from running off rapidly.”

Among the organization’s primary concerns is pollution from nonpoint sources – that is, runoff from a large area rather than from a specific identifiable source – such as sedimentation from erosion in poorly managed forests or runoff from construction sites.

Kota said that there isn’t a shortage of forested land to protect in the region. The challenge is finding the funds. He credits the non-regulatory North Carolina Clean Water Management Trust Fund with playing a crucial funding role in acquiring land and supporting conservation easements over the last two decades. The funds provide landowners an option to accept payment to conserve their land. However, said Kota, competition for conservation dollars is increasing and more difficult to secure.

Another conservation strategy is leveraging partnership with other organizations and agencies, such as North Carolina’s Resource Conservation and Development (RCD) Program, which promotes the protection and conservation of land and water resources.

RCD programs encourage local organizations and government to plan and carry out projects that protect environmental resources and improve social and economic conditions in rural areas.

The Foothills Conservancy is also involved in collaborative efforts to address water quality on a large landscape level. They are a partner in the Catawba-Wateree Water Management group, a dues-paying organization whose mission is to identify, fund, and manage projects in the river basin. The coalition is made up of a wide range of organizations including water utilities, energy companies and environmental groups. Collectively, they’ve developed a master plan addressing water availability in the Catawba basin.

“One of our goals has been to identify which parcels of land could give us the most bang per buck to conserve,” said Vicki Taylor, environmental advisor to the Catawba-Wateree Water Management Group and program manager for the Catawba-Wateree Clean Water Initiative. “The goal is to build a case to have people understand and appreciate the connection between land use and water quality.”

Taylor said $500,000 had been raised to fund research to complete a detailed geo-spatial analysis of the river basin, and will finance an economic analysis to demonstrate the value of conservation efforts.

“We’re hoping this study will be an awareness of why we should protect our watershed and why someone in Charlotte should care about the headwaters, or someone upstream in Lenoir should care about Rock Hill (SC),” Taylor explained. “It’s all one water.”