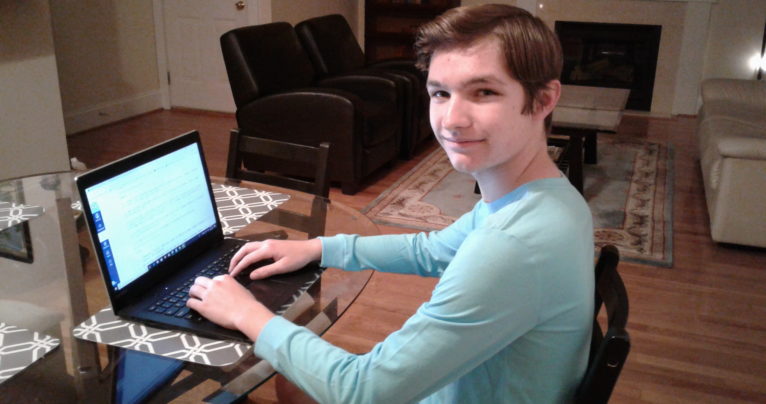 When Yungbluth moved from New York, he wanted to continue the language studies he had begun there, but the local school in Wake County didn’t have a Chinese teacher. His curriculum is part of the blended, individualized instruction that virtual school in North Carolina can provide.

In the afternoon, Connor takes two online courses through Wake Technical College to prepare for his future in engineering or medicine.

Other students who have benefited from NCVPS include special needs populations, students who would like to attend the N.C. School of Math and Science but are not offered advanced courses at their school, students in rural areas, and a gymnast.

While the NCVPS may be unfamiliar to many North Carolina residents and not every school system cooperates with its program, the state has the second-largest virtual public school system in the country, with enrollment climbing from 17,000 at inception in 2007 to 58,000 students across the state today. Only Florida has higher enrollment in its comparable program.

“We are middle and high school,” said NCVPS Executive Director Elizabeth Colbert. “We don’t have elementary grades, yet. I don’t know if we will. But currently, it’s mostly grades 9-12, building backward into middle school with electives and some world languages.”

According to the NCVPS 2017 Annual Report, the high school end-of-year courses meet or exceed state averages on standardized testing.

Colbert explained that NCVPS is in each school district across the state to varying degrees. In every school district, there is an eLearning adviser who knows how to enroll students at any school in the state a student might attend.

The decision to provide NCVPS resides locally with each school district.

“People call all the time, and say, ‘Can I take French during the summer?’” Colbert said. “From our perspective, they can. But it depends on the local school and we can’t override that.”

Some districts find NCVPS meets their needs and are eager to participate. Other districts are much more selective and place limits that prevent families from choosing the online program as an alternative to the existing public schools.

“The superintendent of Warren County can enroll any student (who) wants to take any course, because they’re struggling to get teachers,” Colbert said. “In other places, like Wake County, strict rules apply on who can enroll.” Wake school officials will allow a student to enroll in a course online through NCVPS only if the local school doesn’t offer that course.

Despite rapid growth in the program, the N.C. General Assembly has not backed expansion.

“We’ve not increased VPS from the legislature,” said Rep. Craig Horn, R-Union. “Of late, we have made a couple of runs at having NCVPS sell their products to other states and other privately funded institutions. However, in N.C., we have a law, the Umstead Act, that prohibits the government from competing with private industry. It’s a good law, but in this case, I’m trying to get an exception to the law.

“It would be helpful to kids in other states and virtual learners. So that’s something we’ve got to overcome here. I’m very proud of NCVPS. I sat on the board for a couple of years and have done as much as I can to promote NCVPS and expose it to an ever-increasing audience. I don’t expect an increase in funding in the near term. I’m hopeful, as the economy continues to improve, we will provide additional funds for VPS, but nothing on the burner now.”

According to another legislator, Rep. Graig Meyer, a Democrat who represents Durham and Orange counties, support for NCVPS does not hinge on political affiliation or geography.

“NCVPS is widely popular among legislators, and I’m not sure it really has any opponents,” Meyer said. “I think its bigger challenge is that it’s not that widely known. People know it exists, but they don’t think about all that it can do. And so, my guess is that some school districts under-utilize it.”

One misconception may be that the Virtual Public School becomes the school of record, or that students are in an online environment for most of their school experience. Each student must register with a brick and mortar school.

“They’re in school with a period to take online courses. That’s the bulk of the students. We do have some students who the public schools may allow the student to take all courses online at home due to anxiety or medical issues,” Colbert said. “We have a group of students who are professional dancers or performers and one who is trying to be an Olympic diver. If the local school allows that, the student can do that.”

Heather Yungbluth, a teacher with NCVPS who is also Connor Yungbluth’s mother, started with the program about nine years ago. NCVPS now has more than 800 teachers.

“One of the things that stands out is our communication,” she said. “You would think being online would be a disadvantage but that’s the opposite case. I get multiple texts, tutoring sessions and office sessions.

“We talked through an accounting equation where they could flip their screen and I could see what they were doing. The communication and interaction we do includes keeping communication journals with parents, schools and students. They have an adviser at their school of record.”

She described a variety of ways to communicate online. Blending most online curriculum into the school day also takes care of most of the socialization issues that some homeschoolers may encounter.

“We are extremely social,” she said. “We get to know each one of our students. We know when they are graduating, the color of their cap and gown, where they’re going to school or into what careers they plan to go. We touch upon their academics. We get connected by using technology to build those relationships. That’s what’s so important about VPS.”

NCVPS started in 2007. The first two years were fully funded through the General Assembly. The driver behind it was the need to provide courses for students who live in rural areas of the state.

“If you live in Wake County or Charlotte, or the Piedmont area, you can take a wide variety of advanced placement or computer science programs, or a plethora of world languages,” Colbert said. “But if you live in Hyde or Clay counties, those opportunities were not available to you because of teacher shortages.”

The program was created to provide equitable access for North Carolina students regardless of location. NCVPS provides its services to families as a free resource.

For the future, those involved with the school expect better awareness and continued enrollment growth. For those students with no rural access to internet, schools can stay open late, partner with locations offering free Wi-Fi, which is a growing trend. Some local leaders have also developed school buses with Wi-Fi.

Colbert said that overcoming the awareness barrier in the future through increased funding for outreach. For now, parents who don’t have a counselor to connect their student to NCVPS are unlikely to even know that it’s available.

Elisabeth Almekinder is a contributing reporter to Carolina Public Press. Contact her at liz@lizalmekinder.com