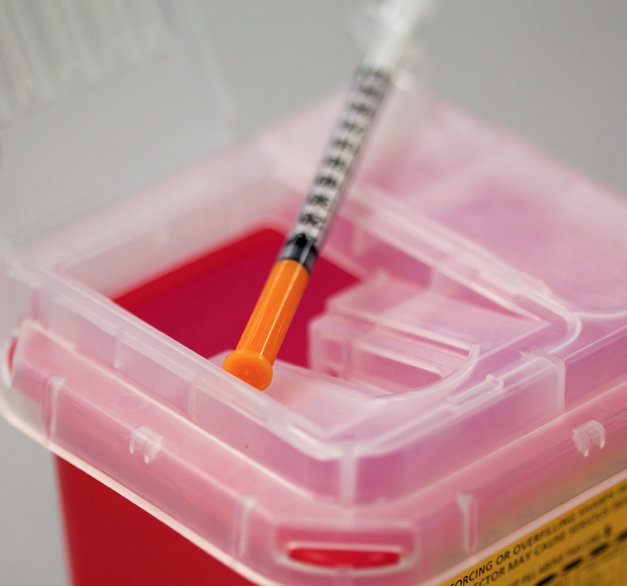 A used syringe slides into a bio-hazard receptacle as part of a needle exchange program. Photo courtesy of NC Harm Reduction Coalition

If you think the “opioid crisis” has been overhyped, consideration of the facts discussed at this week’s forum on opioid issues in Asheville may change your mind.

Deaths from drug overdoses in North Carolina surpassed deaths from motor vehicles accidents for the first time in 2010.

The foster care-system in North Carolina has become inundated with children who are removed from their parents’ home because of substance abuse problems, with drug abuse listed as a factor in nearly half of all out-of-home placements in 2016.

The over-prescription of opioid painkillers coupled with the increasing availability of heroin and fentanyl on the streets has led to more than a quarter-million deaths in the past 10 years across the country.

Dr. Blake Fagan, chief education officer at the Asheville-based Mountain Area Health Education Center, made these points during his keynote speech Tuesday at the N.C. Community Association’s opioid forum, where health-care providers, public-health experts, law enforcement officers and emergency responders came together to discuss the state’s opioid epidemic and the many ways state and local agencies are working to address the issue.

Fagan said the opioid crisis has hit the Appalachian mountain region particularly hard, with overdose death rates at more than 50 percent higher than the rest of the country. Public-health programs like needle exchanges and the availability of the overdose-reversal drug naloxone have likely saved lives and slowed the spread of communicable diseases, according to NCDHHS statistics, but opioid-related deaths, particularly the percentage of those deaths involving heroin and fentanyl, continue to represent a major public health crisis.

Other participants in the forum concurred, adding direct observation and experiences to the statistical data.

Jan Shepard, the public health director for Buncombe County, said during a panel discussion that her agency has seen “alarming increases” in overdose deaths, and said the county could see a four-fold surge in those deaths in 2018, compared to 2016.

She also said her agency has significant concerns about substance abuse and its correlation with infant mortality and prenatal health, as well as increases in Buncombe County in rates of HIV and Hepatitis C infections.

Barry Hendren, the assistant fire chief with the Asheville Fire Department, and Bill Hollingsed, chief of the Waynesville Police Department, described new emergency services programs that provide resources and support to drug users, either after they’ve committed a crime or have been treated for an overdose.

In Waynesville, the police department is implementing the “Law Enforcement Assisted Diversion” program, where drug users accused of some crimes are offered a spot in a treatment program rather than being taken to jail.

“L.E.A.D. actually diverts that individual from the court system,” Hollingsed said. “Initially, if we have an officer who comes across someone in the community who may be possessing a small amount of drugs or involved in low-level crimes to support their addiction, instead of putting them back into the court system, for the fifth, sixth, seventh, dozenth time, with no real clear results, we will divert them from the court system and put them into treatment.”

“Vaya is required to do a network adequacy plan … that’s specific to mental health, substance use and intellectual and developmental disabilities services,” Smathers said. “All of that information is compiled in our network development plan which, in the past, has led to an increase in the number of opioid treatment programs we contract with and other services.”