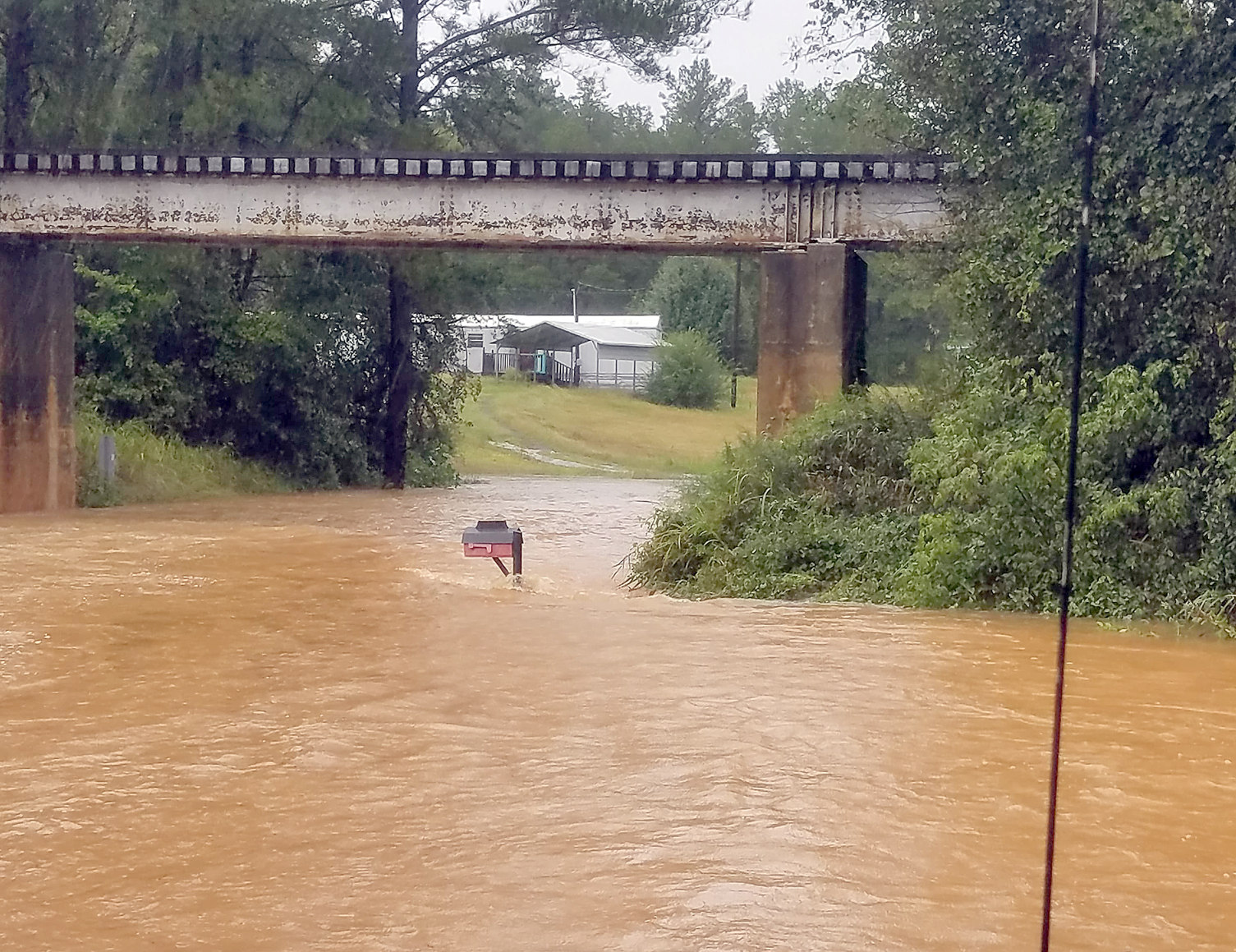 This road through Norwood, in Stanly County, is one of many across the state that have been rendered impassable by flood waters as of Wednesday. Courtesy of Louise McCall

As North Carolina continues to recover from the devastation and flooding caused by Hurricane Florence, many residents lack access to clean drinking water.

With more than 1,000 roads still closed as of Wednesday afternoon, the North Carolina Department of Transportation has advised drivers to avoid the southeastern and south central portions of the state due to heavy flooding.

NCDOT has also reported there is no safe or reliable access to Wilmington. Emergency crews and urgently needed supplies can get into the city, but limited access and continued changes in flooded rivers make the trip challenging.

According to Environmental Protection Agency spokesperson Maggie Sauerhage, North Carolina has reported 21 community water systems operating with restrictions and 16 have completely shut down in addition to several publicly owned treatments plants that are nonoperational.

The combination of impassable roads and shutdown water systems has created a shortage of drinking water, with no way to get the supplies to residents stranded in flooded areas.

To offset these shortages, the EPA has deployed a Water Division technical specialist to the North Carolina Emergency Operation Center to support the state’s relief effort along with the U.S. Army Corps of Engineers and the North Carolina Water/Wastewater Agency Response Network.

Not a drop to drink

Prior to Florence’s landfall, residents of coastal cities were encouraged to stock up on bottled water in case of a shortage or power outage.

Deputy Director for the National Center for Disaster Preparedness Jeff Schlegelmilch said one of the most important parts of preparing for a hurricane is having a disaster kit with enough water to last several days. He said even once the hurricane passes, the danger remains in the form of contaminated water.

“Threats to clean water come in a variety of forms, but the biggest threat is probably biological,” Schlegelmilch said.

“Run-off from agricultural production, sewage overflow, as well as decaying animal carcasses and other hazards can contaminate standing water, as well as water supplies and private wells. This can lead to skin infections as well as gastrointestinal illness.”

In addition to the normal bacterial contamination associated with hurricanes, the floods caused by Florence also passed through hog lagoons and power plant ash disposal sites, releasing waste and waste and coal ash.

Schlegelmilch said these sorts of contaminants could be avoided in future flooding events if older infrastructure is updated to current standards.

“It may end up costing us more up front to build this kind of resilience, but it is far cheaper than cleaning up after the storm and is without the added cost of people’s health.”

Two of the hardest hit cities in North Carolina were Wilmington and New Bern.

Despite severe flooding, the city of New Bern’s official Twitter account announced the city and Craven County water systems did not suffer significantly and the water is safe to drink. Surrounding counties in the region, however, have boil advisories in place.

Unlike New Bern, road access to Wilmington is severely limited and, as of Wednesday, the city lacked a local and public source of clean water.

City officials are asking evacuees to not return because of limited supplies and unsafe road conditions.

Much of Wilmington receives its water from the Cape Fear Public Utility Authority, which faced a shut down before fuel was located Sunday.

Despite being isolated by the storm, trucks carrying supplies arrived in Wilmington on Monday for residents who stayed and rescue workers. The North Carolina National Guard helped to distribute these supplies while the delivery trucks continue to make their way to other affected areas along the coast.

While most donations are coming from charitable organizations, Anheuser-Busch mobilized a Colorado brewery to package more than 300,000 cans of water to be sent immediately to the Carolinas.

Local water utilities have been heavily affected, but so have private wells in rural areas. Rachel Noble, director of the UNC Chapel Hill Institute for the Environment Morehead City Field Site, said private sources of water host the same risks as municipal water.

Even if boil water advisories and bleach treatments are followed, a chance of contamination remains. Noble recommends getting the water tested as soon as possible after a major storm like Florence.

“Homeowners wouldn’t really know (whether their water is safe to drink). It might not bother them, you could not immediately get sick,” Noble said. “If you have a private well, be proactive and get your water tested. Getting your water tested by the county is essential to keeping your family safe.” 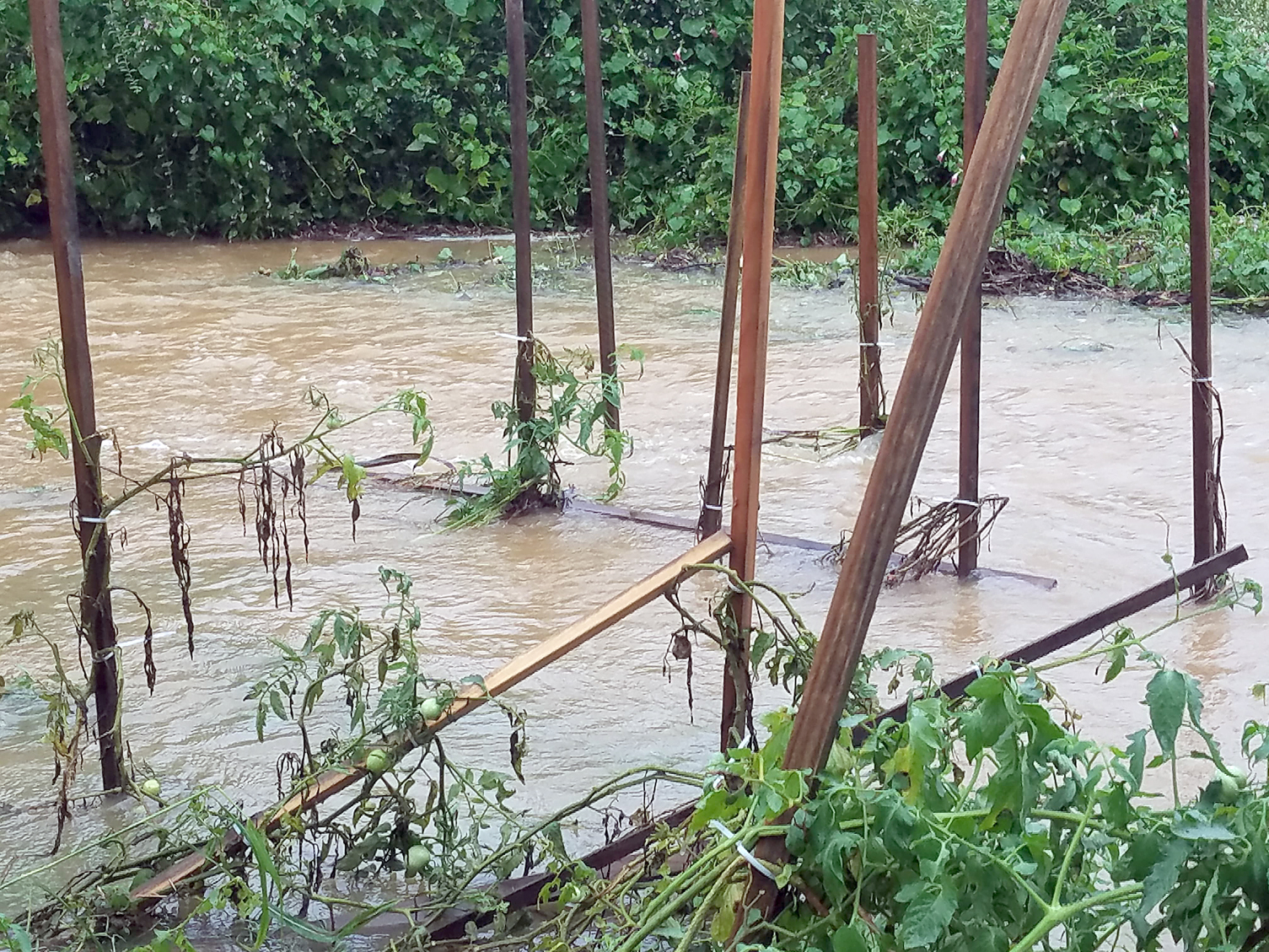 Flooded crops, like these tomatoes in Stanly County, have added to the misery for many across North Carolina. Courtesy of Louise McCall

Using Facebook’s disaster relief feature, many people in North Carolina and surrounding states are offering help in the form of volunteer work, food, water, clothes and other supplies to those affected by Florence.

West Center Farm worker Louise McCall posted in the group offering to bring supplies to victims and asking for donations from others to bring.

Although McCall’s farm is far from the coast, and is located in the Stanly County town of Norwood, flooding from the nearby Pee Dee River has been significant. She said most of her crops were washed away and a storage room full of family heirlooms was destroyed.

She said despite losing part of her livelihood and sentimental items, she is safe and wants to make sure other are as well.

McCall’s desire to help others in need is not unique. At a Wednesday afternoon briefing, Gov. Roy Cooper addressed a similar attitude he saw in other North Carolinians as he traveled across the state in the aftermath of Hurricane Florence.

Though people like McCall are well-intentioned, official relief efforts warn of the dangers amateur rescue efforts may cause.

Scott Coleman, a representative with the Joint Information Center said the state is encouraging people to donate rather deliver supplies themselves.

“We are actually encouraging people to go through established charities like the American Red Cross and Salvation Army rather than, say, loading up a truck and heading down there,” Coleman said. “The roads are already congested enough as it is and we are trying to keep the routes open for emergency vehicles and clean-up crews so we can get people the help they need as quickly as possible.”