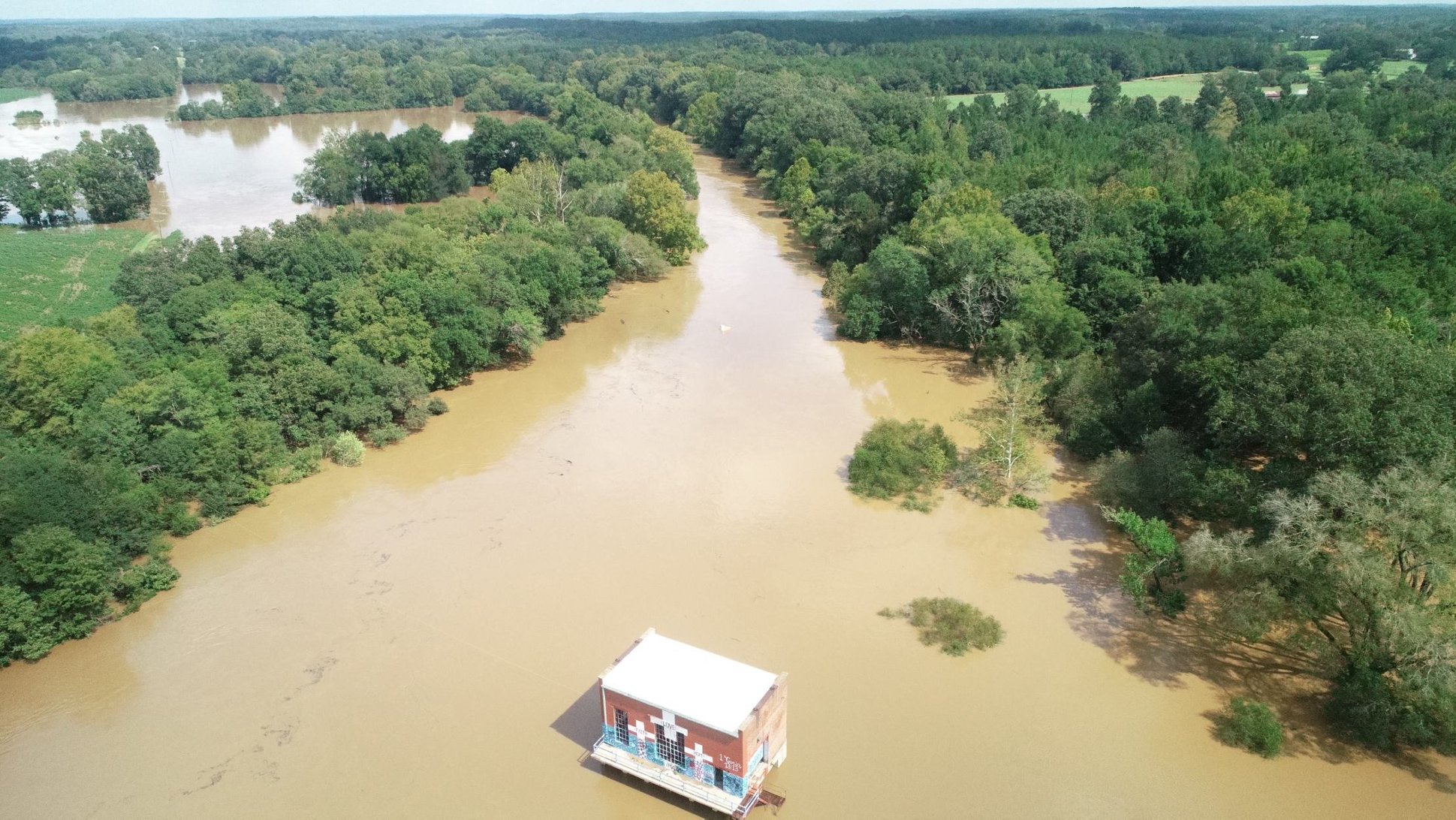 The impact of the 2018 tropical systems in North Carolina wasn’t confined to coastal areas. Near the state’s geographical center, the route of N.C. 42 through Carbonton runs under floodwaters from the Deep River on Sept. 18, in eastern Chatham County, near Lee and Moore counties. Courtesy of the N.C. Department of Transportation.

Hurricanes Florence and Michael caused school districts in their paths to miss several days of school. The state is helping districts avoid official penalties, but educators across the state are divided about the long-term wisdom of losing so many days of instruction.

As school districts recovered from Florence, Gov. Roy Cooper signed legislation Oct. 3 to grant calendar flexibility to schools in districts with federal disaster declarations. This allows the districts to waive up to 20 days of absences if they choose to. That choice isn’t necessarily automatic.

According to the N.C. Department of Public Safety, 30 counties have been federally declared for both individual assistance and public assistance, and 11 counties have been declared for public assistance only. School districts located in counties with either of these types of declarations can take advantage of the waiver policy. Although the legislation originally applied to those affected by Florence, it also covers districts with declarations due to Michael.

Valita Quattlebaum, chief communications officer for New Hanover County Schools, said her district will be using this waiver in addition to creating a new calendar to recoup days. Hurricane Florence heavily affected the coastal district’s schools and means of transportation, she said.

“We were out 17 days,” Quattlebaum said. “We had to get our buildings cleaned up, we had to clear up debris and make our campus safe enough for students to go into. We had repairs to do, get rid of damaged furniture, things that had gotten wet.”

Of the state’s 115 school districts, 49 were closed on Sept. 17, the Monday after Florence struck.  At least 1.2 million students in North Carolina missed some school due to the storm, according to the Department of Public Instruction. Florence battered coastal areas and adjacent inland parts of Eastern North Carolina, then moved in a circular motion into northern South Carolina and then back into the western portion of North Carolina. Some areas along the state line received heavy wind and rain the entire time. In some cases, rising rivers caused additional flooding to roads and facilities long after the storm had passed.

In early October, different parts of the state faced a similar problem with Hurricane Michael, which moved from the southwestern corner of the state to the northeast, causing flash flooding and wind damage wherever it went. Several districts were again forced to miss class time due to the storm.

“When students miss school for a day or two, the effects of missed instructional time are usually easily recouped through condensing some lessons and shortening some class activities or assignments,” Anderson said.

“However, missing so many days, especially all in succession, creates a more significant interruption in the learning process. From what I have learned from some of my own students who are also currently teaching in some of these counties, teachers across our region are practically restarting their year.”

Many school districts in affected areas are working toward making up instructional hours wherever they can and using the absence-forgiveness policy only if necessary.

Lindsey Whitley, chief executive of community engagement and communications officer of Cumberland County Schools, said the school system is grateful for the state’s response, which will allow the schools to make up some days through calendar rescheduling, but not all seven missed days.

“Based upon approval from the state recently, we received the calendar flexibility to forgive really all of the days that were missed,” Whitley said. “However, our Board of Education voted unanimously to approve some makeup days, because we really do value the instruction of our kids and want them to be successful in the classroom.”

Most school calendars will be exchanging early release days and teacher workdays into full instructional days. Catherine Murphy, director of communications for Moore County, said most school districts build extra time, or bank hours, into school calendars for cancellations due to the weather.

For Moore County Schools the new legislation allowed them to forgo using their bank hours so they can remain prepared for any future unexpected closures.

“That we had the six days forgiven put us back into the black in hours,” Murphy said. “And because of Florence we had already gone ahead and converted two early release days to full instructional days. So now we have 31 bank hours if anything happens over the winter or another storm comes through.”

Other measures are being taken to get back on track with the curriculum. The state School Board voted unanimously Oct. 16 to waive one of the three required reading assessments. Schools affected by the storms may waive the middle-of-the-year assessment and complete only the beginning- and end-of-year assessments in the 2018-19 school year.

“We were able to get an extension on some testing, so we didn’t have to test students right as they came back through the door,” Quattlebaum said. “We got a little bit more time to help students get readjusted to school and get back into their routines.”

Teachers establish routines and rules, such as organizing their desks or completing schoolwork according to certain qualifications, early in the year to ensure orderly classroom management, Anderson said.

“When the routines and school days are interrupted, teachers usually just review the same rules and procedures, and they quickly come back with little attention,” Anderson said. “However, with extended days away from school, the effects are greater, even to the extent that returning to school after a month’s absence is almost like starting completely over.”

Stress over catching up with missed curriculum can be compounded by individual trauma due to evacuation, loss of belongings and other interruptions to life, Anderson said.

“We’ve been doing things like calling admissions offices and seeing if students can get extensions. Also working with students on senior projects to change some of the requirements so they can easily meet the deadlines,” Quattlebaum said.

“It’s a tough time when you have storms back to back, but by pulling together as a community, we know we’ll get through it,” Whitley said.