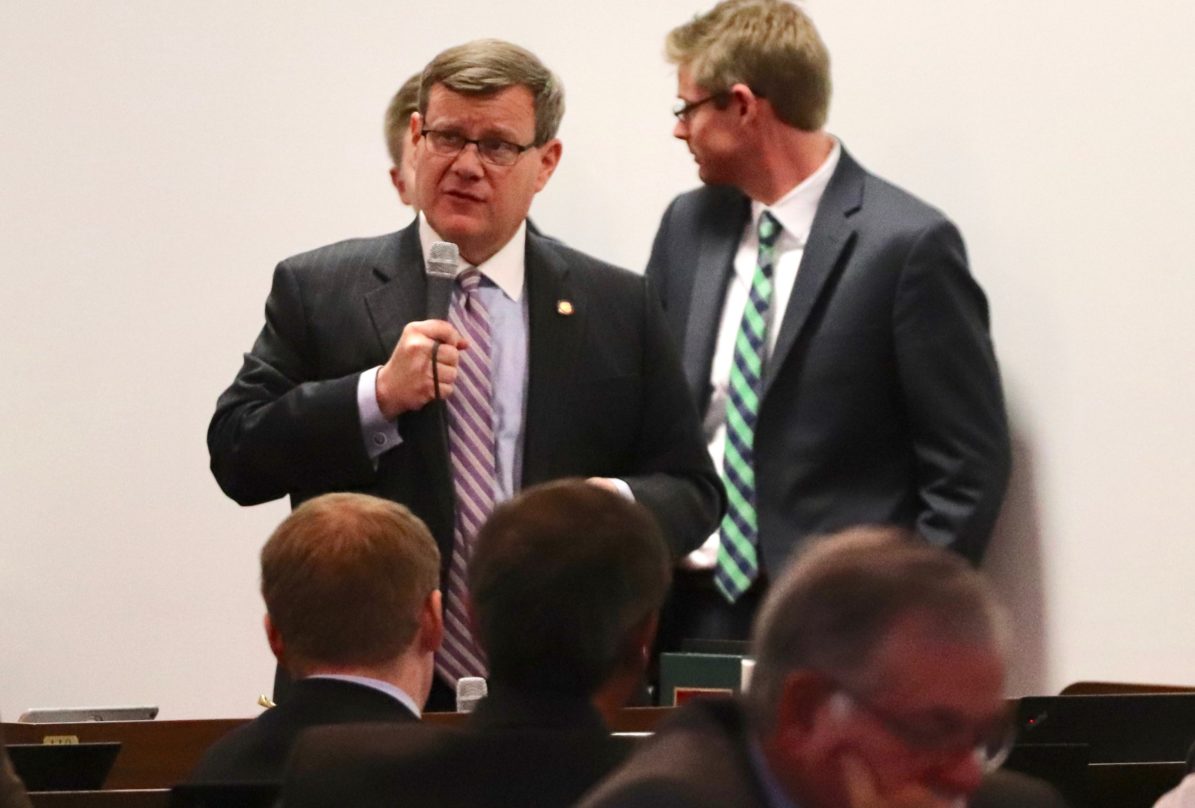 Two key elections bills are awaiting action from the governor as the 2017-18 General Assembly winds up work in a postelection session colored by investigations and confrontation amid an atmosphere of wary compromise.

Although political tensions remain high between Republican leaders in the General Assembly and Democratic Gov. Roy Cooper, the action this December has, for now at least, taken a decidedly different tack from two years ago, shortly after Cooper’s election.

In 2016, legislators assembled for a postelection effort to provide assistance in the wake of Hurricane Matthew but turned quickly afterward to a series of bills dialing back the powers of the office of governor and revising the composition and control of the state Board of Elections.

Two years later, court cases filed in response to those bills and an even longer-running separation-of-powers case, originally filed by Cooper’s predecessor, Pat McCrory, have helped shape a series of compromises in the final weeks of the year.

This fall, voters rejected a bid by the legislature for a constitutional amendment that would have given it greater appointment powers and control over the state Elections Board. On Wednesday, the state House and Senate approved new legislation aimed at resolving the long fight.

The new bill mostly returns oversight of elections, ethics and lobbying to where it was in 2016, creating a five-member Board of Elections appointed by the governor and an eight-member board of ethics. The bill also puts oversight and record-keeping for lobbying back under the purview of the Office of Secretary of State.

In addition, the bill expands county boards of elections from four members, two in each party, to five with the new fifth member, appointed by the governor, serving as chair.

The legislation passed 81-18 in the House and 34-3 in the Senate, picking up a total of 34 Democratic votes in both houses.

The bipartisan nature of the vote was not hailed in a subsequent joint statement released by House Speaker Tim Moore, R-Cleveland, and Senate leader Phil Berger, R-Rockingham, which stated flatly that the new bill gives the governor “partisan control” over the Elections Board as a result of the court order.

“Over the past two years, Gov. Cooper has waged a legal battle against a bipartisan Board of Elections and ethics enforcement with a series of lawsuits arguing that he alone should have control of the board overseeing campaign finance and elections law in North Carolina,” the statement reads in part.

In negotiations with the governor for the past month, legislators had pushed for an even-numbered board that would have four members from each party. But given the strength of the court ruling and the likelihood he would prevail again in another challenge, Cooper refused to budge on the main issue of appointments.

The new five-member state Elections Board, which under the law would take office Jan. 31, would include three members of the governor’s party and two members of the opposing party and would select its own chair.

On Wednesday night, Cooper spokesman Ford Porter said the final bill, which is wide-ranging and runs 20 pages, is getting a close look.

The governor has 10 days to either sign the bill, veto it or let it become law without his signature.

Complicating negotiations on the legislation for the past two weeks has been the current Elections Board’s ongoing investigation into an expanding set of allegations that started with revelations about absentee ballot irregularities in Bladen County.

State elections investigators are looking into an alleged ballot-harvesting scheme that assisted 9th U.S. House District GOP candidate Mark Harris in winning 96 percent of the mail-in ballots in the county during the 2018 primary and an outsized margin in the general election.

Local consultants and elected officials, as well as the Harris campaign and one of its main consultants, have been subpoenaed by the Elections Board.

The investigation has also expanded to include potentially similar conduct in Robeson County, making it more likely that a new election could be ordered by the board.

This week, North Carolina Republican Party officials joined the call for a new election, a dramatic shift from demands two weeks ago to certify Harris as the winner.

With a critical investigation underway that includes a federal election, the current board has received permission from the court to stay in business.

In its ruling that the elections and ethics board had been appointed unconstitutionally, the three-judge panel that decided the case ordered that the board cease work on Dec. 6, a date that was thought to give it enough time to close the books on the 2018 elections.

Last week, the court granted a request to allow the current board to continue its work through Wednesday. That was extended again late Tuesday through Dec. 28.

A section of the new bill directly addresses the ongoing investigation. It requires that if a new election is called, then a primary for the seat must also be held.

The bill also directs elections officials to look into absentee balloting for the past five election cycles and report its findings to the General Assembly.

On Wednesday night, current Elections Board Chair Joshua Malcolm sent a letter to the three-judge panel asking that the current board remain in office until the congressional race and three other local races in Bladen and Robeson counties are finalized.

Malcolm said he did not want to see a disruptive gap during the investigation. “Disputes and uncertainty about the board’s clear authority between Dec. 28 and Jan. 31 will substantially disrupt our efforts,” Malcolm wrote.

“Due to the complexity of the ongoing investigation, and based on nonpublic information regarding Congressional District 9, it is my belief that a transition during this time would work against the public’s interest, undermine ongoing activities and eroding public confidence in the eventual determinations made by this agency.”

Also on the governor’s desk is new voter ID legislation that passed last week in a series of near party-line votes. The bill, which follows approval this fall of a constitutional amendment mandating a photographic ID for voting, requires voters to present photographic identification at the polls starting with the 2019 election cycle.

The legislation, which passed 67-40 in the House and 25-7 in the Senate, creates a far broader set of categories of acceptable identification than an earlier attempt in 2013, which was part of a bill ruled unconstitutional because it targeted African-American voters.

Opponents of the new voter ID bill raised similar concerns, saying it would disproportionately affect elderly and minority voters. Proponents of the legislation argued that the bill included enough latitude on the types of identification, access to free state IDs and voting options for people unable to obtain them that it would pass muster with the courts, if challenged.

During House debate on the bill, legislators made several attempts to drop or modify a section of the bill that would allow college IDs to be included.

Debate on the ID legislation also drew on the experience in Bladen County, with Democrats charging that the new law would do nothing to address the type of absentee-ballot fraud alleged there. Republicans said the Bladen investigation underlines the need for tighter election security.

One last-minute change to the bill did tighten requirements on absentee ballots, requiring witnesses to attest to the identity of the voter.

Cooper has not indicated whether he will veto the bill, but voting rights groups have called on him to do so. The legislation is also likely to quickly face another court challenge.

The full text of the two bills is available online: