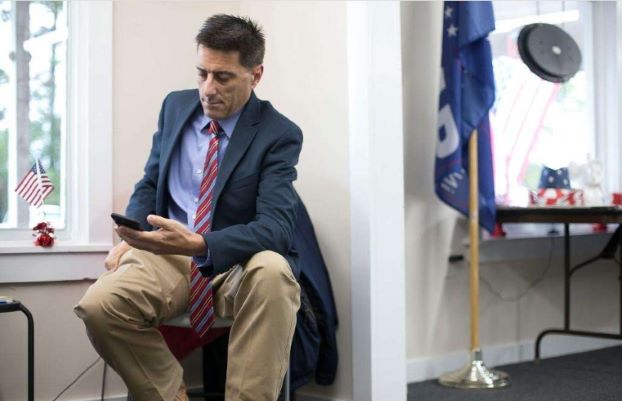 Dallas Woodhouse, the executive director of the North Carolina Republican Party, checks his phone as he prepares for a press conference on Monday, October 16, 2017, at the Orange County Republican headquarters in Hillsborough. Courtesy of NC Politifact

by Paul Specht of the News & Observer for Politifact North Carolina

Unofficial results put Harris 905 votes ahead of Democrat Dan McCready, and the NC GOP says the alleged tampering is so minimal that no one called to complain. Dallas Woodhouse, the party’s executive director, recently pointed to the state elections board’s attempt to collect tips from voters in Bladen County.

Before Election Day, the state elections board mailed letters to Bladen County voters who requested absentee by-mail ballots. The letters reminded voters, “Elections officials will never come to your house to pick up your absentee ballot or tell you how to vote,” and asked those with tips to call the board.

On Jan. 17, Woodhouse tweeted about what he referred to as “huge news” about the investigation.

The elections board “sent (a) letter to every person requesting a mail ballot in Bladen, (but) received no calls to the hotline number provided,” Woodhouse tweeted on Jan. 17.

Is it true that no one from Bladen County called the state elections board with tips?

No. Here’s how the mix-up happened.

When Woodhouse tweeted his claim, he linked to the Facebook page of Stony Rushing, a Republican Union County commissioner. Rushing encouraged reporters to find out how many people called the elections board hotline — but he didn’t claim to have official information on the number of calls received.

(This argument makes it seem like, to order a new election, the elections board needs to prove that at least 905 ballots were destroyed or altered. That’s not the case, as PolitiFact has already reported.)

“I believe Joe Bruno reported that,” Woodhouse said in an email, referring to a reporter with Charlotte TV station WSOC.

Of those, “8 calls were between Nov 1-3. 1 call was made Dec 7. NCSBE is not providing the voicemails left on the hotline, citing the investigation,” Bruno added in a tweet.

Patrick Gannon, a spokesman for the NC elections board, confirmed that the agency received nine calls on the hotline. He also repeated what Bruno reported: that the elections board can’t release details about the calls due to the ongoing investigation.

Woodhouse said the NC elections board received “no calls” after alerting Bladen County voters to possible absentee ballot fraud. When contacted by PolitiFact, Woodhouse amended his claim, saying the board received four calls.

Neither claim is correct. Furthermore, his tweet — and the Facebook post his tweet promoted — presents a flawed argument: that the evidence must show 905 votes are in question. That’s not the case. We rate this claim False.

This story was produced by the North Carolina Fact-Checking Project, a partnership of McClatchy Carolinas, the Duke University Reporters’ Lab and PolitiFact. The NC Local News Lab Fund and the International Center for Journalists provide support for the project, which shares fact-checks with newsrooms statewide. To offer ideas for fact checks, email factcheck@newsobserver.com.

Politifact is a national nonprofit news media organization based in Florida. The North Carolina branch works in conjunction with the Duke University Reporters' Lab and the News & Observer of Raleigh. The NC Local News Lab Fund and the International Center for Journalists also provide support for the project.