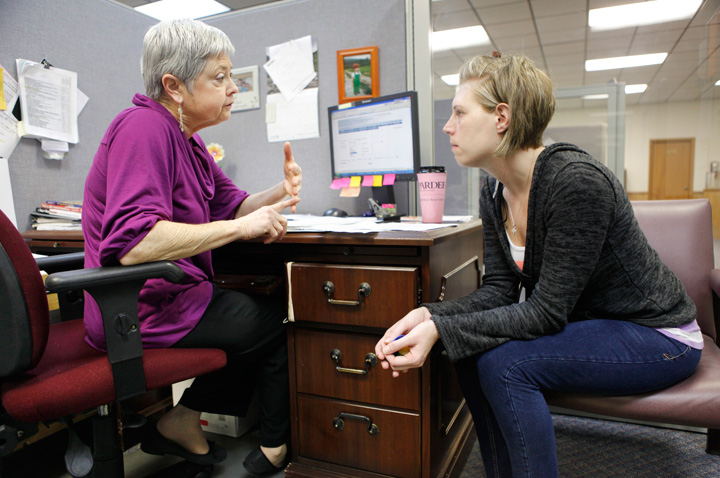 Ellen Forcier, an employment consultant at the Hendersonville JobLink Career Center, speaks with Jordan Berger, right, who was looking for health care work in this 2013 file photo. A recent study has shown that women’s earnings continue to lag behind those of men in North Carolina, though the amount of  the gap varies widely by county. Matt Rose/Carolina Public Press

North Carolina’s gender wage gap puts the state in the bottom third of the nation and varies widely across the state, according to data published last year in a report commissioned by the N.C. Council for Women and Youth Involvement.

The rating improved largely because median annual earnings for women, the ratio of earnings and the percentage of employed women in managerial roles increased. But the disparity across the state and low labor-force participation keeps the state from a higher rating.

According to the report, the ratio of women’s median earnings to that of their male counterparts is 80.9 percent, meaning for every dollar a man makes, a woman in the same position would earn about 81 cents.

Because of this gap, the study reports that women face higher levels of poverty and less income not only for themselves but also for their families, their communities and the state economy.

Reasons for the gap

Steven Allen, a professor of economics at N.C. State University and associate dean for graduate programs at its Poole College of Management, told Carolina Public Press that the wage gap exists because of breaks in attachment to the labor market and, in some cases, gender discrimination.

When women choose to re-enter the workforce after parental leave, some difficulties may arise.

“Some professions are easier to enter, exit and come back later than others,” Allen said. “Those where the knowledge and skills transfer across employers, like teaching and nursing, have smaller wage gaps. Those where inside-the-firm skills and networks matter the most have the largest gaps.”

Wendy Jacobs, chair of the Durham County Board of Commissioners, said she does not think it is a coincidence that the professions where skills transfer are often dominated by women.

“If you think about a lot of the jobs women have, they’re care providers or they’re educators,” Jacobs said. “A lot of the time, the people who are doing some of the most important jobs like caring for our seniors, caring for our children, often have disproportionately low wages.”

Gaps across the state

This average gives a picture of the state, but looking at North Carolina’s 100 individual counties paints a different image.

While the gap has narrowed from the original study published in 2004, when the ratio was 73.8 percent, fewer women are in the workforce now.

In 2002, nearly 60 percent of North Carolina women had entered the workforce, but by 2016 that number dropped to 57 percent.

In Durham County, women, on average, earn 96 percent of what men make. Jacobs attributes this small wage gap to the county’s progressive politics, including minimum wage and family leave policies.

“I would like to hope those are the standards and values we espouse,” Jacobs said.

“We were one of the first counties in North Carolina to pass the CEDAW Resolution. We have always been a leader when it comes to upholding rights of women in our community.”

CEDAW, or the Convention on the Elimination of All Forms of Discrimination Against Women, was passed by the county in 2017.

According to the United Nations, CEDAW was first formed in 1979 to decrease discrimination against women across the globe.

As of 2018, nearly every country in the world had adopted CEDAW, with the U.S. being one of the few that had not.

Jacobs said that while she is hopeful about the future of Durham County, she knows work still needs to be done. She said North Carolina’s rankings did not surprise her.

“Based on the research and policies of the past 10 years of our state legislature, it doesn’t surprise me,” Jacobs said.

According to data in the study, the counties with the largest wage gaps tend to be in rural areas.

Linda Sparks, a practicing naturopath and member of Women of Waynesville, a group dedicated to bringing women together and helping the community, said she sees this pattern in her town.

“Haywood County is a beautiful place to live, and the small-town hospitality is amazing,” Sparks said.

“That being said, there is a major resistance when it comes to growth and advancement.”

According to the report, fewer than half of the women living in Haywood County have joined the workforce, but those who have experience a wage gap of nearly 75 percent.

Sparks said that while she is not currently affected by the gap because she is self-employed, she has experienced it in the past and does feel discrimination because of her gender.

“I constantly have to prove myself and my credibility, which my male counterparts do not have to do,” Sparks said. “I have never understood why anyone would think it would be OK to pay men and women differently for the same job. I’ve had this happen to me in Los Angeles. It’s a national problem and sad to me that this sweet county is one of the worst in the state.”

The wage gap won’t close soon, but there is hope

While some improvements are being made, the report suggests that as current trends continue, the gender wage gap in North Carolina will not close until 2060.

However, experts are skeptical this will happen even then.

“I would not be surprised if a study in 2060 found women earning less than men,” Allen said. “However, the gender gap has kept getting smaller generation by generation.”

To close the gap, the report offers recommendations, including creating and enforcing legislation for fair labor, encouraging wage transparency and increasing the minimum wage.

If the wage gap does close, the study reports North Carolina women would see an average increase of $6,628 per year, a 19 percent increase. The poverty rate for women would be cut in half.

The Status of Women in North Carolina: Employment and Earnings: https://iwpr.org/wp-content/uploads/2018/06/R536-NC_Employment-Earnings-Final-with-cover.pdf

Convention on the Elimination of All Forms of Discrimination Against Women: https://www.ohchr.org/EN/ProfessionalInterest/Pages/CEDAW.aspx