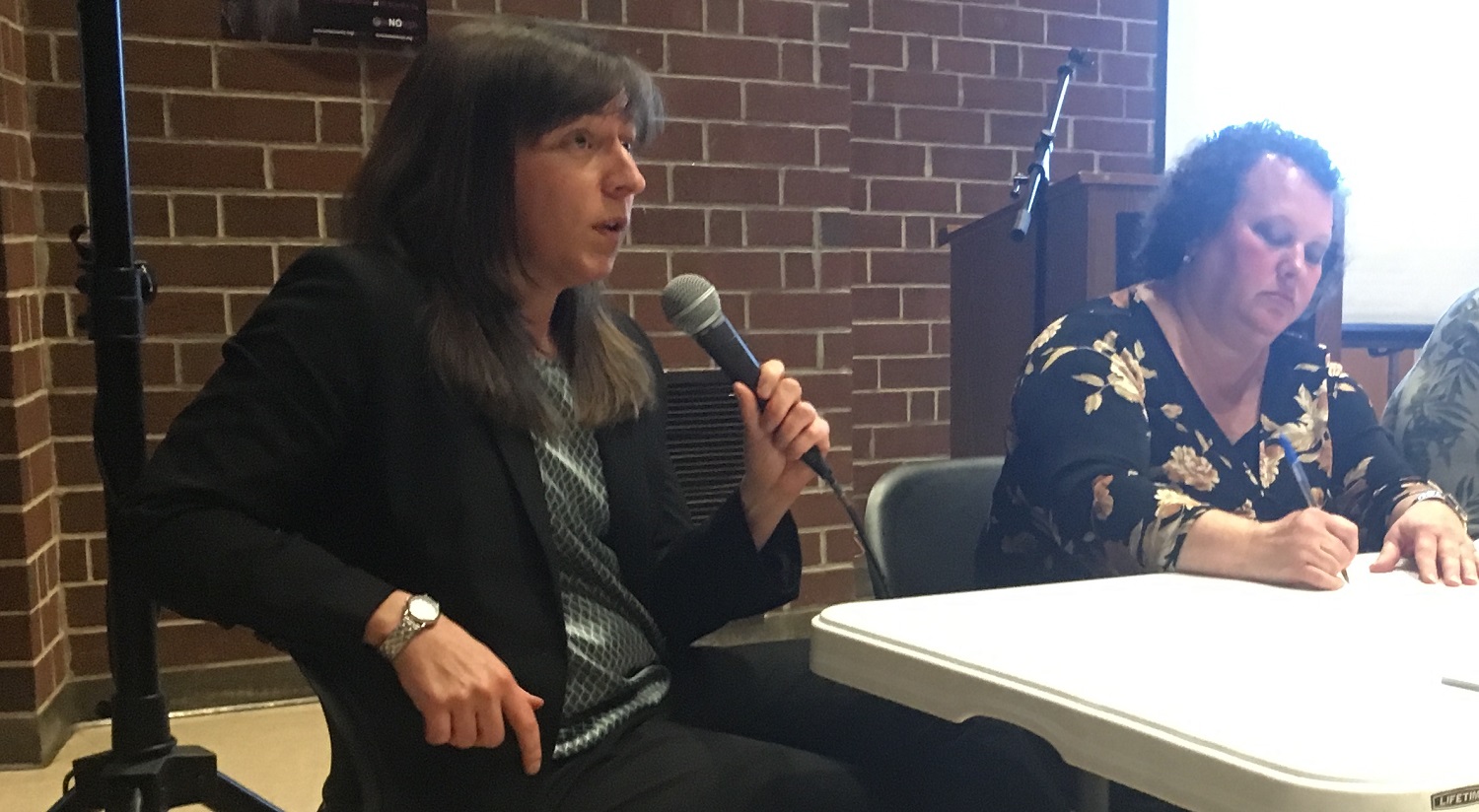 Abigail Cooley of SAFE, an agency that aids survivors of domestic violence in Transylvania County, talks about the challenges that victims face in smaller communities. Cooley spoke during a forum on domestic violence Feb. 18, 2019, at Brevard College in Brevard. To her right is Galiya Paliga, president of the North Carolina branch of the National Organization for Women. Angie Newsome / Carolina Public Press

With state Rep. Cody Henson, R-Transylvania, having recently been served with a domestic violence order of protection, state and local organizations concerned about domestic violence conducted a forum Monday night at Brevard College in Brevard.

A judge is expected to rule on whether to grant his estranged wife a permanent order at a hearing Tuesday, also in Brevard.

Representatives from SAFE and Helpmate, domestic violence agencies serving Transylvania and Buncombe counties respectively, spoke at the event along with the North Carolina branch of the National Organization for Women and Progress NC.

Speakers emphasized the insidious nature of domestic violence as a crime that often goes unreported or unpunished and for which societal norms and laws often fail to provide remedy. They also described the role of domestic violence perpetrated in a large percentage of the nation’s mass murders and other crimes.

“What’s different about domestic violence is that one person is in control, and it’s persistent and ongoing,” explained Abigail Cooley of SAFE.

Cooley also noted the special challenges of dealing with the system in a small community where everyone knows one another and can expect to encounter both supporters and opponents during a trip to the grocery store. Noting the name of a Western North Carolina supermarket chain, she said, “We don’t have ‘Ingles,’ we have ‘mingles.'”

Kit Gruelle of Helpmate said she has been asked the question of why women don’t leave domestic violence situations millions of times over the last 30 years. She described an increase in risk and lethality for women who are estranged from their partners.

“This is a crime that we still don’t have our arms around,” Gruelle said.

She emphasized the importance of listening to victims in helping them navigate the court system and the network of support organizations rather than simply urging every person to leave immediately.

Gruelle also addressed shortcomings in North Carolina, reading an 1874 court ruling that called for judges to stay out of domestic violence cases and observing that it often seems little has changed from a time when the law viewed women as property.

Like the other speakers, she called for reforms in aspects of North Carolina law, singling out a particular item in the state statutes for its absurdity: “Misdemeanor assault with a deadly weapon? What kind of a charge is that?”

Belinda Shelton, the stepmother of a woman who has worked with Helpmate in Asheville after a domestic violence incident, described her family’s frustrating experience with the legal system.

Responding officers initially believed the assailant’s claim that he was the victim, in part because he had so badly beaten his wife that she could not communicate coherently. Shelton also expressed frustration with a system that, although eventually putting him in prison, has already shaved significant time from his initial sentence.

Shelton expressed outrage at one provision of state law that she said gives an abusive husband power of attorney if his wife is in a coma, even if he put her there.

ZaKiya Bell-Rogers, who now works for Helpmate, described her childhood ordeal with domestic violence as her mother and siblings fled Mississippi and came to Asheville, where Helpmate assisted them in the 1990s. 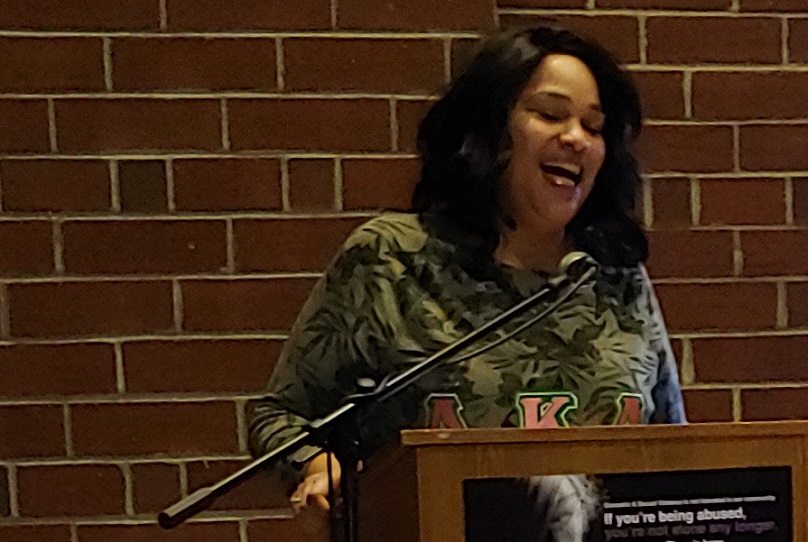 ZaKiya Bell-Rogers of Helpmate, which aids survivors of domestic violence in Buncombe County, described her family’s flight away from an abusive father in the 1990s. Bell-Rogers spoke to a forum on domestic violence at Brevard College on Feb. 18, 2019. Frank Taylor / Carolina Public Press

Bell-Rogers said her father had threatened to kill her sister if her mother ever left and had previously killed the family’s dog. “The man who lived in my house was the evil one,” she said.

She also discussed the failures of the system to fairly serve African-Americans and other people of color, with inappropriate law enforcement handling of cases only increasing distrust and discouraging victims from relying on the system for help.

“We have so many murders that are done in the black community, and nothing is done,” Bell-Rogers said, explaining why victims had no reason to expect police to handle domestic violence among African-Americans effectively.

Gruelle also discussed the broader societal costs of domestic violence. “We need to realize how interconnected violence in the home is with all the other crimes,” she said.

In explaining the reason for Monday’s event, Galiya Paliga, president of the NC NOW, described how the news of Henson as a state legislator being served with a domestic violence order of protection “got my attention.”

During questions at the end of the forum, attendees asked what they could do to bring about changes in North Carolina law.

Eleanor Wood of Progress NC encouraged them to contact their legislators.

Asked whom people in Transylvania County should contact, she said, “Cody Henson.”

Editor’s note: This article has been updated to correct the name of one of the speakers at the forum.