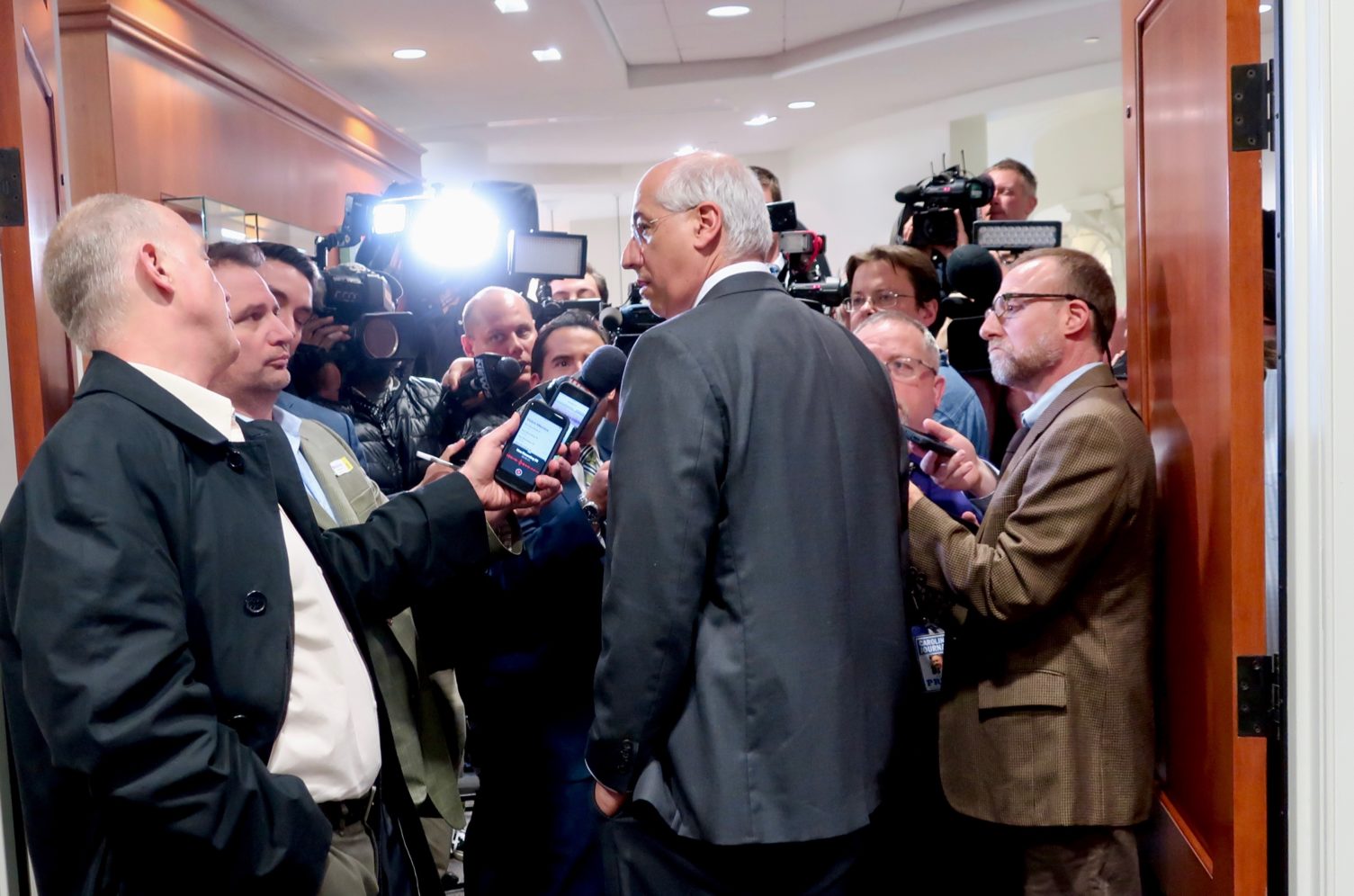 Now that the state Board of Elections has ordered a new election for North Carolina’s 9th Congressional District, what comes next is a more complicated question as the state evaluates the best schedule and various politicians decide whether or not they will jump into the race.

The board ordered a new election Thursday after the fourth day of an evidentiary hearing on a ballot harvesting scheme came to an abrupt end, as a result of a reversal by GOP candidate Mark Harris, who said he now believed a new race is necessary.

Harris read a brief statement from the stand Thursday afternoon after a series of closed-door negotiations between his legal team and the state board. He admitted that he had given mistaken testimony during questioning that morning, which he blamed on recent health issues.

He said the sepsis for which he was hospitalized in January had led to two strokes and he was not prepared for the rigors of a hearing.

He reiterated that he had no knowledge of illegal activities in his campaign and then called for a new election.

“It’s become clear to me that the public’s confidence in the 9th District seat general election has been undermined to an extent that a new election is warranted,” he said.

Harris quickly left the hearing with members of his legal team followed by nearly a dozen reporters and photographers. He gave no statement, but state GOP leaders backed him immediately afterward.

“We respect Dr. Harris’ decision on behalf of the voters,” state Republican Party director Robin Hayes said in a statement. “This has been a tremendously difficult situation for all involved, and we wish him the best as he recovers from his illness and subsequent complications. We will continue to work with legislators and investigators on how we can improve the electoral system so that these kinds of situations can be avoided in the future.”

After Harris’ departure, state Election Board Chairman Bob Cordle moved to wrap up the hearing, which earlier in the day he had warned could run well into next week.

The board, three Democrats and two Republicans, then voted unanimously for a new election for the congressional district and two local races in Bladen County that were also in dispute.

Another evidentiary hearing will be scheduled before action is taken on a judicial race in Robeson County.

Marc Elias, the attorney for McCready, said he did not expect the hearing to end the way it did, but given the direction of questioning, Harris’ team had little choice.

Elias said that, in addition to Harris’ admitted misstatement about having information about his son’s emails in advance, Harris was facing a long cross-examination on his prior statements. Harris, who is also a Charlotte pastor, had claimed he had no reason to suspect illegal activities were taking place.

During questioning by state board chief counsel Josh Lawson, Harris was repeatedly asked if he had discussed with anyone the production of email exchanges with his son, John Harris, which had been introduced on Wednesday. During lengthy testimony, the younger Harris said he had repeatedly warned his father about working with Bladen County political operative McRae Dowless.

The emails proved critical to the state’s case that Harris, who claimed to have done due diligence to make sure the process used by Dowless was legal, either knew or should have known that it included workers collecting absentee ballots and mailing them, steps that are in clear violation of the state’s ballot harvesting law.

Dowless, at the center of the state’s investigation into an absentee ballot scheme, had declined to take the stand on Monday, the opening day of the hearing.

Early in his testimony, the elder Harris said he believed Dowless’ “program” did not include handling any ballots, just the absentee ballot request forms.

He attributed the success of Dowless’ efforts to his relationships with local politicians and a network of family and friends. Harris tried to downplay his son’s input, saying John Harris, then 27, could be overly judgmental and “had a taste of arrogance.”

The day before, John Harris, who is a Raleigh-based prosecutor in the U.S. Attorney’s Office, had offered devastating testimony that he had raised concerns about absentee ballot manipulation in Bladen County in both emails and phone calls starting in early 2016, after Harris lost a close GOP primary during a race for office that year. The son said he ended those discussions with a final pitch not to work with Dowless in April 2017, just before his father agreed to run again for the seat and employ Dowless for work in Bladen, Cumberland and Robeson counties.

The Harris legal team had failed to produce the emails between father and son, but the state board had obtained them from the son, whom they interviewed about the contents.

“The key thing that I am fairly certain they do that is illegal is that they collect the completed absentee ballots and mail them all at once,” John Harris wrote to his father in an email on April 7, the day after Harris met with Dowless and a group of local politicians in a Bladen County furniture store.

Testimony by both Mark Harris and his son appeared to contradict what was said on the stand on Tuesday and Wednesday by political consultant Andy Yates, founder of Red Dome, which ran the Harris campaign.

Yates had said that Harris had already vetted Dowless and established how he was to be paid. He said he was “shocked and disturbed” that a man he talked with almost daily had deceived him.

Harris said he had told Yates to make sure Dowless was operating legitimately and was surprised that Yates did not keep written records for most of the more than $100,000 the campaign poured into the Dowless operation.

McCready quickly reconstituted his campaign and started raising money for another run, officially announcing his candidacy Friday afternoon. But for now, it is unclear whether Harris will run again for the seat.

Investigations into his campaign’s Bladen and Robeson county operations continue, and GOP leaders said there is genuine worry about the seriousness of his health conditions.

Other Republican politicians in the district, including state Sen. Dan Bishop of Charlotte, have said they might consider the race.

The schedule for a new election is also unclear. Cordle, the Elections Board chair, said the board would wait for a recommendation from its staff on the schedule before setting a date.

One possible choice would be to have it coincide with the spring primary in this year’s municipal cycle. He also noted that there will be a special election for the state’s 3rd Congressional District, following the death earlier this month of U.S. Rep. Walter Jones.

Gov. Roy Cooper, who is charged with setting the date in that special election, has yet to do so. Cooper issued a brief statement Thursday night after the board vote.

“I thank the board for unanimously doing the right thing. People must have confidence that their vote matters, and this action sends a strong message that election fraud must not be tolerated,” he said.

Also on Thursday night, a spokesperson for state Senate leader Phil Berger, R-Rockingham, who has strongly backed Harris, said the board made the right call and legislators expect to consider changes to elections law as a result of the case.

“Based on evidence uncovered in their investigation, the board has called for a new election, as have both candidates, and we agree with the board’s decision,” he said.

“Regarding changes to election rules, we continue to look at our election laws, and I’m sure there will be some proposals that will come forward. We will take a look at them and take them under consideration, but at this time we’re not prepared to say what those measures should be.”