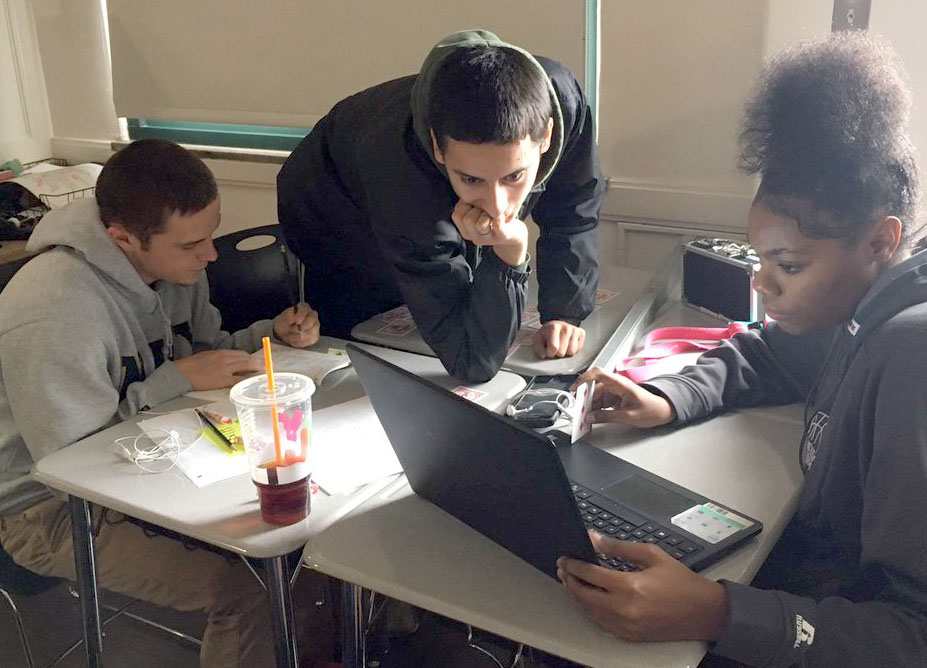 Students in an Asheville High School literature class work on a Shakespeare project together. Courtesy of Asheville City Schools.

As Asheville City Schools wrestle with one of the largest racial achievement gaps in the nation, district Superintendent Denise Patterson says the system is pursuing solutions and keeping the community informed.

Each school has an equity leadership team to work with ICS. A district equity team formed this school year.

The district is considering how the community can help close the gap, Patterson told Carolina Public Press.

“But first, we’re looking at our data and trying to share that information, explain that information,” Patterson said. “Because that’s kind of like the background of it all because you’ve got to know and explain what your needs are and why they are there.”

Patterson said the district has remained open to scrutiny as it faces the gap and has even increased its transparency.

“I think this is the first time that we’ve put our data out there in this manner in a long time, as I understand,” Patterson said.

“So I would say our meetings have focused on … establishing our goals and working together. And now we’re going to try to move some more in (the direction of) ‘What is it that the district really needs? What is it that the community can do and what can they provide for our kids?’ ”

The district recently had the fifth-largest achievement gap between black and white students in the nation, according to The Geography of Racial/Ethnic Test Score Gaps: CEPA Working Paper No. 16-10 from the Stanford Center for Education Policy Analysis. The study was published in 2018 and uses data from standardized math and reading tests taken by public school pupils from 2009-13.

While a newer ranking in comparison to other school districts across the nation isn’t available, the district’s racial achievement gap has only gotten worse in recent years, despite years of efforts to address the issue.

The Asheville City Schools Board of Education conducted a special meeting about the gap in November and a joint meeting with the City Council in January. Announcements about the November meeting did not mention the intention to discuss one of the largest racial achievement gaps in the country.

The meeting agenda said it was “to discuss academic achievement.” Asked about the apparent secrecy surrounding the racial achievement gap discussions, the school system noted to CPP in February that it fulfilled state law by announcing the meetings ahead of time.

Patterson maintained that getting data to the community is a priority, noting that the board met with Buncombe County commissioners and that the curriculum team has met.

When asked whether parents were provided with the data, Patterson said it is on the website and that the district’s efforts to create equity are well-known.

During a recent meeting intended to create a three-year plan for academically and intellectually gifted students, data was also discussed, she said.

Information on the district’s academic performance is available through the N.C. Department of Public Instruction, she added.

“We always give parents access to that link, as well,” she said. “And if we have meetings, like board meetings or whatever, we include it on the agenda, and that information is there for the public.”

Patterson said the district uses the same data comparisons that the state does.

“But then beyond the state, we try to determine what extra enrichment do we provide our students,” she said.

Patterson said parents are also given information on each school, including each of the six magnet schools. Students can apply to the school of their choice.

Patterson added that the board is “very active,” visiting schools, attending events and completing training.

“We’re trying to help our students and our staff and our district,” she said.

“I think that’s their expectation. I don’t want to speak for the board, but I would think that that would be one of their priorities.”

Patterson films weekly “Sixty Seconds with the Super” videos on social media, and principals make weekly calls to families. Patterson said the district knows not everyone has computer access, so paper announcements are posted on school doors and are available to families.

Patterson believes the district is “very transparent” but acknowledges that mistakes may have been made.

“We don’t always get things right here,” she said.

Why the Asheville City Schools gap?

When asked what caused the gap, Patterson said it could be a variety of factors, noting that a move, divorce, the recession and other issues could have an effect.

However, none of the circumstances Patterson named are unique to Asheville but are disruptive changes that students in all districts potentially experience. Most districts across North Carolina and the United States do not show the extreme disparity in academic performance that shows up in statistics for Asheville City Schools.

“We’re still, every day we dig into data and learn something new,” Patterson said when asked why Asheville City Schools should be different.

“I can’t say at this moment if there’s something very significant, but I do know that things are changing, and the world that we live in, we’ve got to be ready for those adjustments. But that is something that I plan to kind of look at, to continue to look at data.”

Talking with CPP last month, Patterson said she planned to hear the principals’ perspectives at an upcoming meeting.

Patterson, who has been the superintendent for Asheville City Schools for only two years, said she has been learning about Asheville’s history.

Before the schools were desegregated, Asheville had a large number of black teachers. Some left when they were not hired by the newly integrated schools.

“I think that shift occurred for some of our black families,” Patterson said.

“So looking at the gap, did that play into it or not? I don’t know. I’m still studying that. But I know it once was a thriving area for blacks, and the teachers were highly educated. And research says, if you have interaction with at least one black teacher as a black child, that can make a difference in your impact.”

Asked what the ratio of black teachers in the district is today, Patterson said she did not know.

Patterson said she hopes the field of education sees a new wave of teachers soon.

“This gap has been here for over 20 years, so it’s not new,” Patterson said.

“So, how did it get here from 20 years ago? It didn’t come yesterday, or the day before, or even last year. Is it systemic? Could be. Is it societal? Could be. But it’s existed for more than 20 years, so my charge now is to work and see how we can close it.”