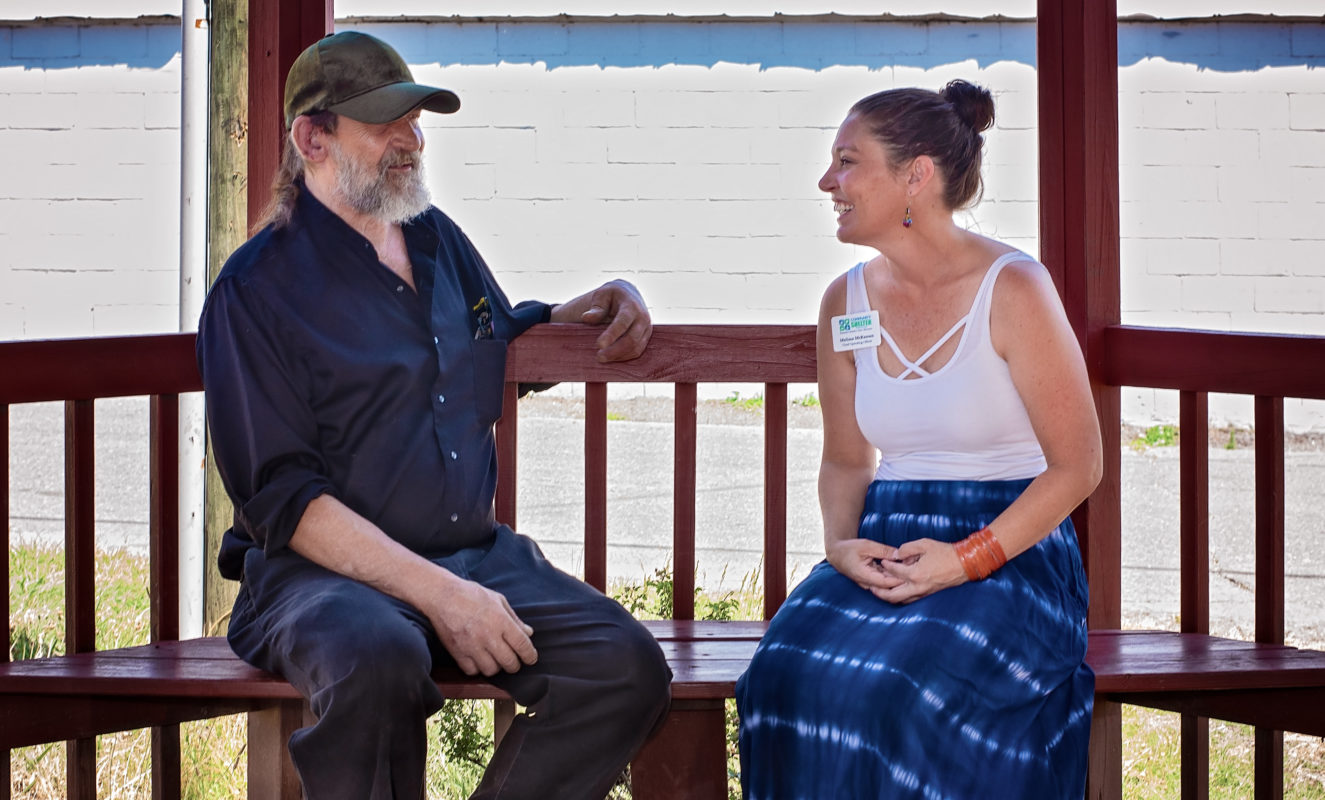 Melissa McKeown, chief operating officer of Community Shelter of Union County talks with a client outside the facility, which serves those experiencing homelessness in Monroe. Jodie Castellani / Carolina Public Press

Official numbers are still coming in, but homelessness in North Carolina appears to be decreasing overall, with a few exceptions, based on counts conducted under a federal program in January.

Each year during the last week of January, communities across the country participate in a U.S. Department of Housing and Urban Development program called the Point-in-Time Count.

According to the National Alliance to End Homelessness, any community that receives federal funding from the McKinney-Vento Homeless Assistance Grants is required to conduct these annual counts.

While the apparent decline in homelessness may seem like a positive trend, those who work with homeless populations express caution that the single-day counts aren’t necessarily the best measure, and in some places, even those numbers are not improving.

The basics of the Point-in-Time Count

The first of these counts was conducted in 2005 to help federal officials make decisions on programs and to inform public opinion and awareness, according to the National Alliance to End Homelessness.

While the annual Point-in-Time Counts must occur every year during the last week of January, North Carolina is more specific, requiring the count to be conducted throughout the state on Jan. 30.

By conducting the count in full during one day of the year, HUD hopes to provide a “snapshot” of the homeless situation in the country, according to Melissa McKeown, chief operating officer of Community Shelter of Union County in Monroe.

HUD dictates that the count should include gathering information to identify homeless individuals such as age, race, gender, household composition, if they are sheltered or unsheltered, veteran status and if they are chronically homeless, among other identifying information.

This data is compiled each year into the Annual Homeless Assessment Report to Congress to assess the effectiveness of programs and policies and work on ways to reduce the number of homeless Americans.

Pros and cons of the homelessness count

Because the count occurs on only one night a year, it may not provide a full and accurate depiction of the situation.

Maegan Zielinski, director of the Wilmington-based Cape Fear Region Homeless Continuum of Care, said changing methodology is also a deficiency to the ongoing study as it makes it difficult to accurately compare the data from year to year.

Zielinski also points to the weather as a prohibiting factor.

“The month of the count is typically the coldest month of the year, and on the 30th in particular, it was the coldest day of the year,” Zielinski said. “We have no control over this, as HUD sets the regulations. This means individuals might have been staying with friends or family or in a hotel for that particular time period, and we would have not been able to include them in our count. Individuals might have left the area and come back after the counting period.”

However, the sheer number of participating agencies around the country does allow for what McKeown calls a more complete story.

“It’s true that there is strength in numbers, and gathering this much data during one 24-hour period is something we should all be proud of,” McKeown said. “This data helps to tell the story of homelessness in America, in our states and in our communities.” 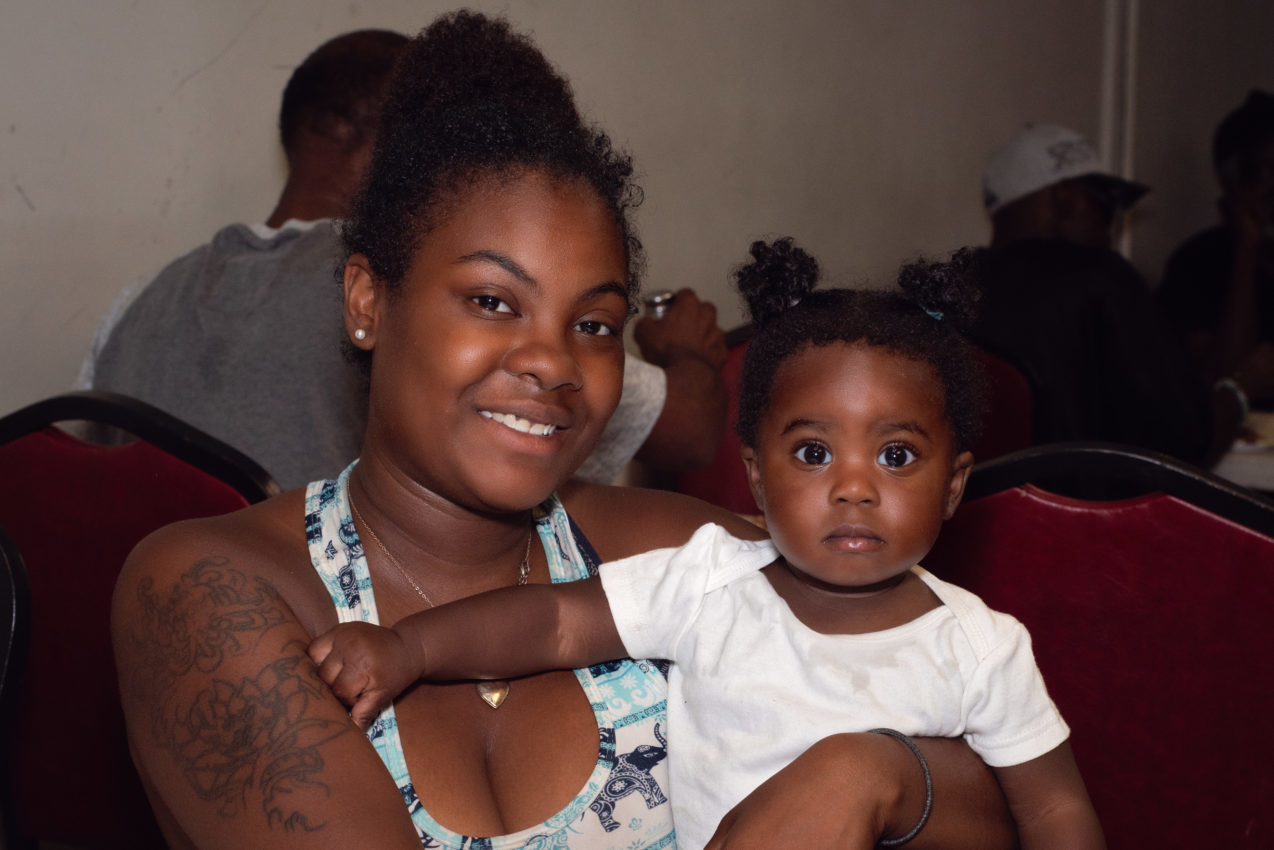 A woman and her child visiting the Community Shelter of Union County in Monroe over Memorial Day weekend. Jodie Castellani / Carolina Public Press

While some of the largest counties in the state, such as Mecklenburg, will not release their 2019 data until later in the year, initial reports indicate an overall decrease in homelessness across the state.

But that trend did not hold true in every location.

One large county, Buncombe, saw a 4 percent increase in the total number of homeless individuals in the area on the night of the count. Jonathon Jones, community development analyst for the city of Asheville, said this is not surprising.

“The data shows that the total count (in Asheville) has gone up and down 5-10% over the last few years,” Jones said.

“With a severe shortage of affordable housing, local partner agencies have done a remarkable job to help keep that number from growing.”

Zielinski said New Hanover County reported 431 homeless individuals, an increase from the year before. Despite HUD funding three programs in the area to combat homelessness, Zielinski said her Continuum of Care is still underfunded and, as she is the only staff member, understaffed.

Zielinski’s Continuum of Cares serves Brunswick, New Hanover and Pender counties, all of which were greatly affected by Hurricane Florence.

“There was a problem before, and since Hurricane Florence, it has exacerbated our problem,” Zielinski said. “With the lack of affordable housing, it is getting more difficult to find housing and work with landlords to house our vulnerable population. However, with this data, we can create solutions.”

While Buncombe and other large counties have similar counts, Union County, one of North Carolina’s 10 largest counties, counted only 95 homeless individuals in 2019. McKeown said this is because the Community Shelter, Rapid Rehousing Program and Turning Point, a domestic violence shelter, work together to get as many Union County residents as possible off the streets.

McKeown said she believes these agencies and programs paired with a changing attitude have created a system to end the cycle of homelessness.

“Part of my mission as a homeless service provider is to change the way people think about our neighbors who need our services,” McKeown said.

“They aren’t just homeless people; they are people who are experiencing an episode of homelessness. These are often people who you interact with every day, your co-workers, your child’s caretakers, the people that you go to church with.”

Though many counties have similar programs in place, not all of them are as effective.

Zielinski said the cyclical nature of homelessness makes it difficult to provide permanent solutions, especially when outside forces such as natural disasters force many into homelessness.

McKeown also acknowledges this cycle and said she understands it is a big problem, but something needs to be done, starting with making housing affordable.

“We need access to more affordable housing. Situational homelessness will always occur because of the high rental rates and stagnant wages. Individuals and families who make at or below the poverty limits will always be susceptible to homelessness because there just isn’t enough room in their budgets to prepare for financial emergencies,” McKeown said.

“Until we address both the affordable housing crisis and the low wages for our neighbors, we can expect to see new episodes of homelessness.”