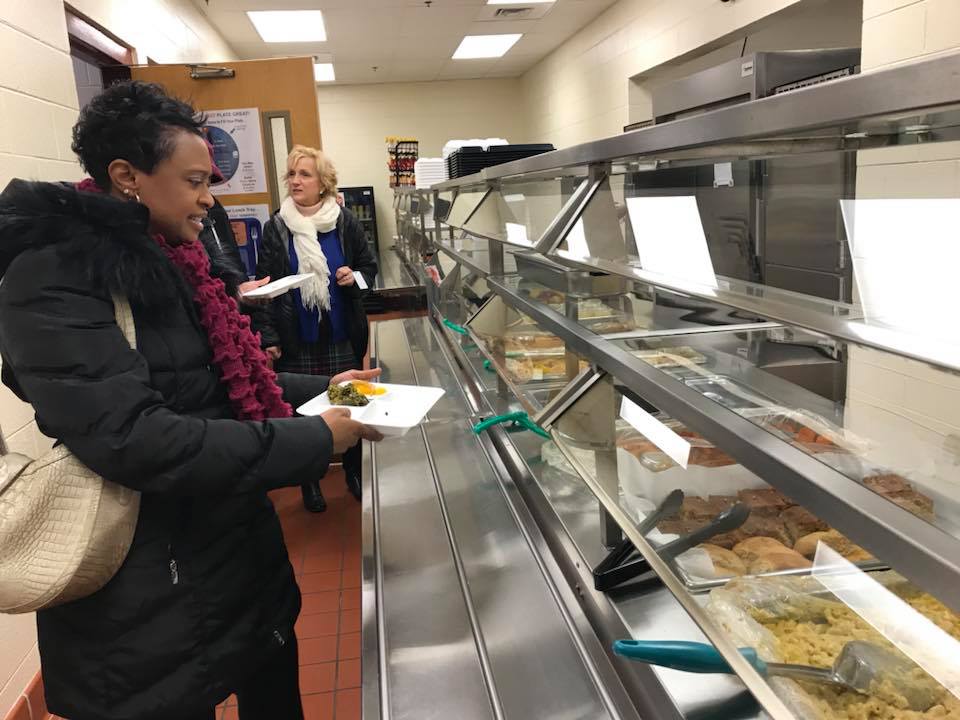 Asheville City Schools Superintendent Denise Patterson, seen here visiting a school cafeteria, is slated to receive a $22,500 severance as part of a negotiated separation agreement with the schools. But because the school board approved the agreement in closed session, there are questions about its lawfulness and terms, as well as how board members voted. Photo courtesy of Asheville City Schools

The legality of a negotiated departure agreement for Asheville City Schools Superintendent Denise Patterson, announced last week, may be in doubt because the school board agreed on the matter in closed session.

After a week in which school officials responded to repeated inquiries about the agreement from Carolina Public Press with assertions about the confidentiality of personnel matters, CPP attorney Amanda Martin issued a letter to the schools Thursday, urging them to produce the requested records.

A key issue is the severance package the schools gave to Patterson, who issued a resignation letter citing undisclosed medical concerns. The severance agreement would not have normally occurred as part of her original contract.

While the board appropriately discussed some aspects of the situation, such as Patterson’s medical condition, in closed session, the creation of a new financial arrangement with her required a vote in open session under North Carolina law.

Conducting such a vote in public would have revealed how specific board members voted on a matter of expending public funds. It would also make public the full details of the agreement, including whether it required additional nonmonetary actions from Patterson or the schools or whether certain actions, such as the wording of her resignation letter, were spelled out in the agreement.

So far, the schools have declined to disclose details other than the existence of the arrangement, the timing of Patterson’s departure and the amount of her compensation. Although she has already resigned, Patterson will be on paid medical leave through mid-November based on her $135,000 annual salary. She will receive an additional $22,500 in severance. The board has not stated what Patterson was required to do, if anything, to earn this severance.

Board Chair Shaunda Sandford posted a statement to the school district’s website last week emphasizing the need for confidentiality and urging everyone to move on as the schools seek a new superintendent.

“By law, the details of personnel matters are confidential,” Sandford wrote. “Therefore, the Board asks parents and stakeholders understand that neither the school district nor Board Members can discuss any personnel issues.  The Board is focused on ensuring a successful start to the 2019-2020 school year and will begin the search process for a new superintendent immediately.”

CPP has notified school district attorney Chris Campbell that the portion of last week’s closed session in which the board discussed and took action on the financial aspects of Patterson’s departure apparently constituted an unlawfully closed session. As a result, CPP has requested records — potentially including a recording if one was made — from this portion of the session as well as the full text of the agreement.

CPP also advised Campbell that if the board took action inappropriately during a closed session, that action could be legally void. The board would be able to avoid this outcome by revoting on the matter in public session, with the terms of the agreement entered into the record.

In a response Wednesday, Campbell again emphasized the confidentiality of personnel matters under state law, citing several statutes that he said backed the board’s action.

“To provide maximum transparency while respecting the confidentiality rights of Dr. Patterson, the Asheville City Board of Education provided prompt notice of all public information,” Campbell said. “This is a complex issue involving numerous statutes that must be read together.”

Martin, who is also chief counsel for the N.C. Press Association, issued a letter in response to Campbell on behalf of CPP Thursday afternoon.

“While we believe that Dr. Patterson’s performance could have been discussed in closed session,” Martin wrote, “issues related to her compensation of new contract are not confidential.

“We find no statutory allowance for a closed session vote on compensation or other contract terms. Thus, following any discussion of Dr. Patterson herself, vote on Dr. Patterson’s new contract should have been taken in an open session.”

At the time of publication of this article, neither Campbell nor other school official had responded to Martin’s letter.

The expenditure of extra funds in separating from the superintendent may be a matter of political significance to residents.

The schools have drawn attention recently for persistent problems with one of the highest rates of racial inequity in standardized test scores in the country, in turn raising questions about how wisely previous boards have directed resources. The issue dated to testing done well before Patterson’s selection as superintendent in June 2017, but the gap had only worsened in subsequent years, suggesting that whatever the schools were doing to resolve the problem was failing or backfiring.

In previous reporting on the achievement gap, CPP also found additional problems with the school board’s failure to conduct business in an open and transparent matter, as special called meetings to discuss the achievement gap avoided identifying the issue to be discussed directly, were lightly attended by the public and received minimal news media attention.

Friday afternoon, Asheville City Schools spokesperson Ashley Thublin issued a statement by email to the regional news media, apparently in reference to the issues that CPP has raised.

“We understand and welcome public interest in our schools and especially in our search for our next superintendent. Our hope and intention are always to handle personnel matters by the book, and that is why we have an attorney who provides counsel on those matters,” Thublin wrote. “Our attorney has provided answers to the technical process questions we have received regarding the resignation of our past superintendent.  We hope that has been helpful. Our focus is on engaging the community to provide input on what skills, characteristics, qualifications and experiences they want in our next superintendent. We will be rolling out our community input survey Monday and following up with community input forums in late summer. We hope everyone will participate.”

The statement restating the school board’s loyalty to the legal course charted by Campbell did not acknowledge or address the legal arguments that CPP and its attorney have raised about the situation.

Unlike many others, we aren’t owned by umbrella organizations or corporations. And we haven’t put up a xxpaywall — we believe that fact-based, context-rich watchdog journalism is a vital public service. But we need your help. Carolina Public Press’s  in-depth, investigative and public interest journalism takes a lot of money, persistence and hard work to produce. We are here because we believe in and are dedicated to the future of North Carolina.