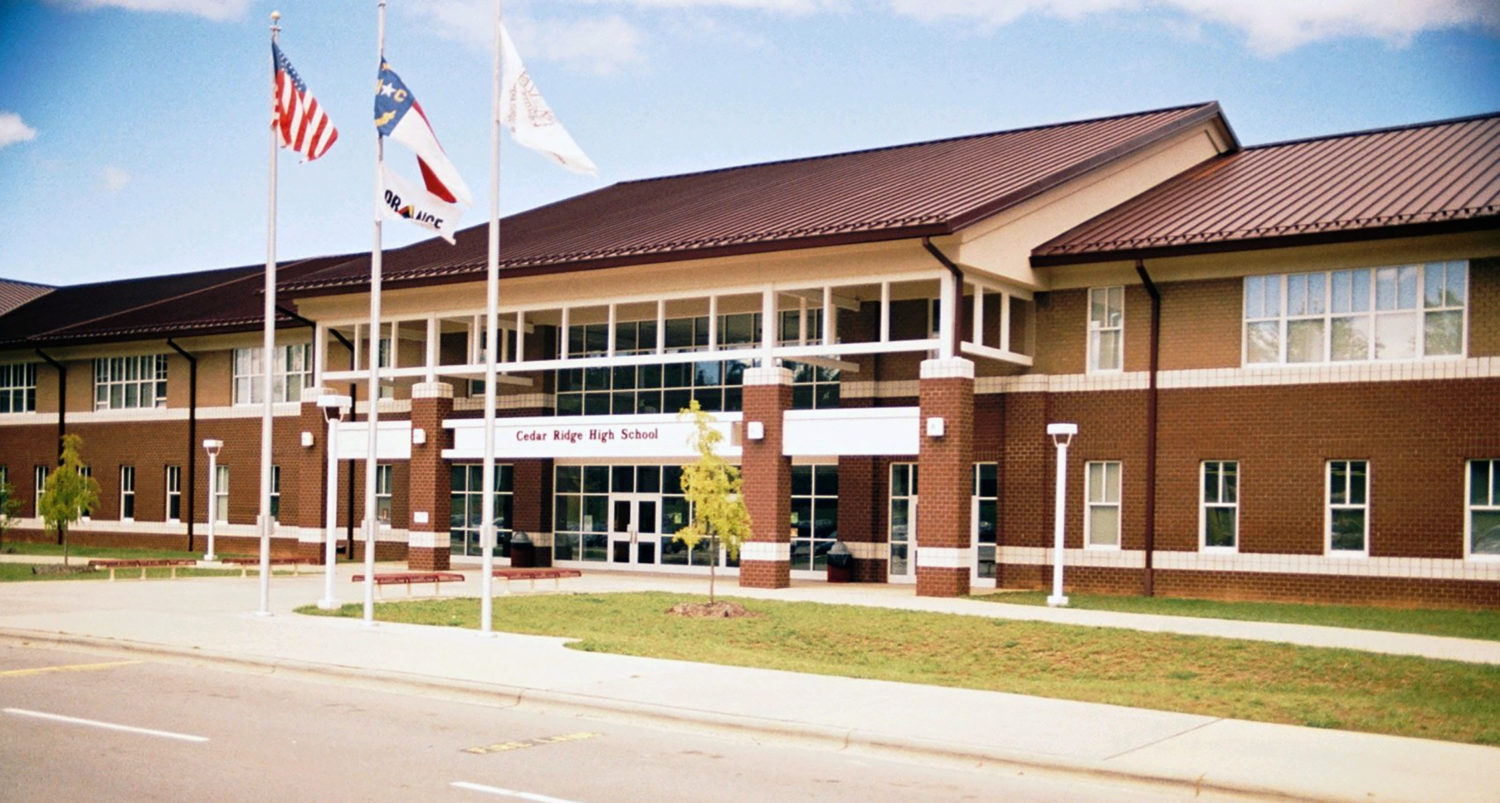 Cedar Ridge High School in northern Orange County was the scene of threats written on a bathroom wall in May. Photo courtesy of Orange County Schools

Someone wrote threats on a bathroom wall in May at Cedar Ridge High School in Hillsborough.  Teachers learned of the warning about bringing a weapon to school and staging a mass shooting but held on to the information for several days before alerting the school’s administration and resource officers.

Then the principal decided the threats were not credible and did not pass the information up the chain to the superintendent or anyone else at the county office, or to law enforcement.

Orange County Schools Superintendent Todd Wirt later apologized to his school board for this violation of policy.

May was not a good month for the district, in which teacher Kristen Thompson was also arrested for threatening to “shoot up” her Hillsborough school, Pathways Elementary, according to police.

Threats of school violence may be an unfortunate sign of the times, but incidents like the one at Cedar Ridge leave parents, students and educators wondering what is supposed to happen when a threat is made. How are teachers and administrators expected to determine which threats are serious enough to act on?

In March, Charlotte-Mecklenburg Schools were hit by a rash of violent threats.

“We want people to understand we are very serious about the safety of our schools and that we will respond to every single threat that we get,” Charlotte Assistant Police Chief Vicki Foster said at the time.

In this era when school shootings have become increasingly commonplace, exactly what are the requirements for communicating with superiors about threats? And when is law enforcement brought in? 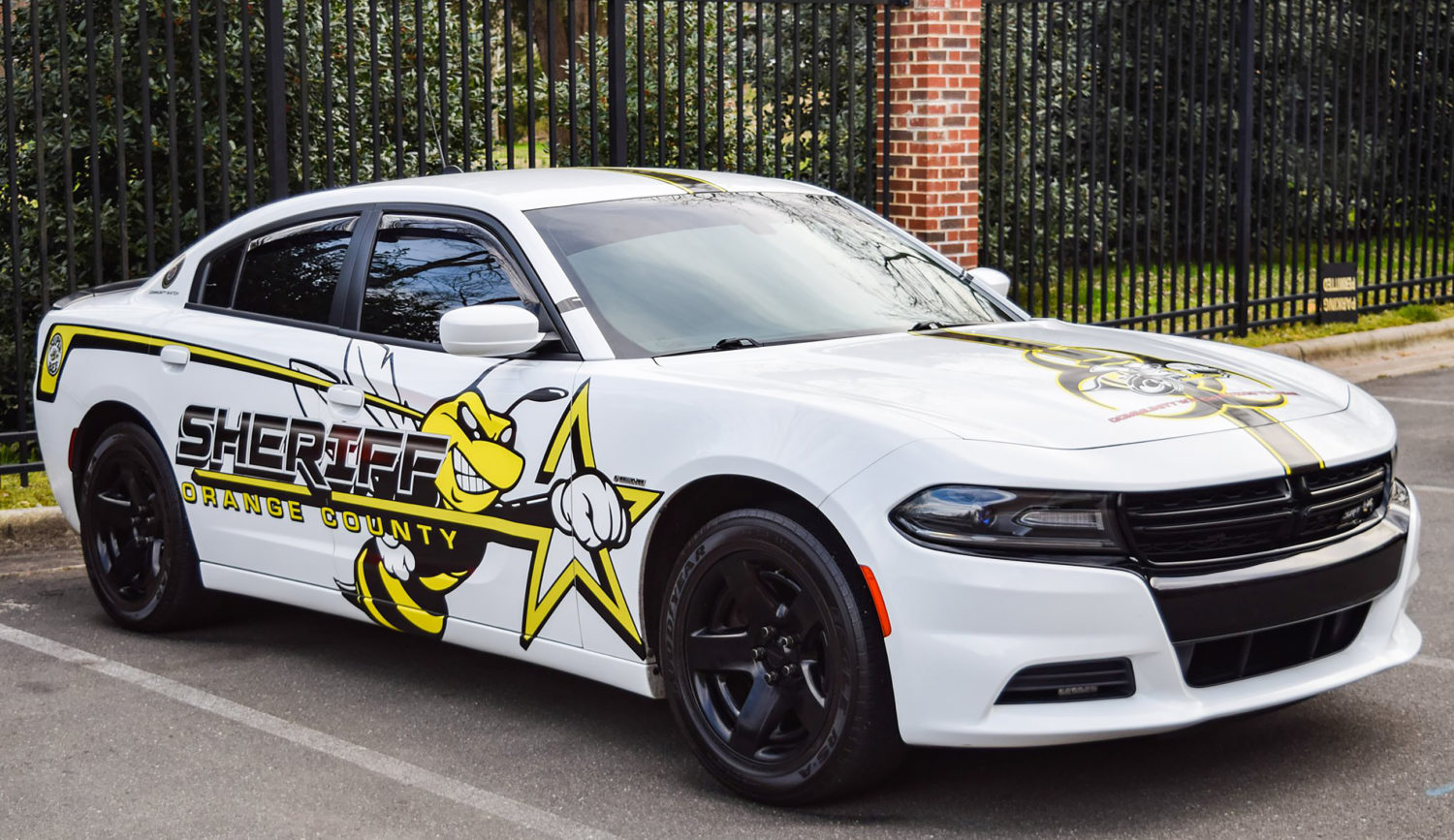 Sheriff Charles Blackwood of Orange County said that the Cedar Ridge school resource officers — law enforcement professionals who are responsible for safety and crime prevention at the schools where they are assigned — violated policy by not reporting the threats.

Most North Carolina school districts tell teachers to pass any threat on to their principal, and then principals are to pass it on to a school resource officer.

But as with most decisions, it can be a subjective call based on knowledge of the situation and experience in handling similar incidents.

“There is a subjective line for both school resource officers, teachers, administrators, students and also parents,” Blackwood recently told Carolina Public Press. “The line is a simple one, yet it has many farther-reaching delineations which often cause those involved to second-guess themselves.

“Working together in the confines of the school with the students can often cause those lines to become blurred,” Blackwood said.

Teachers across the state follow a simple policy: “If I hear a threat, I report it,” Melissa Marie, a science teacher at McClintock Middle School in Charlotte, told CPP, “After that, it’s up to the administrators.”

“If I feel uneasy about something, I report it,” said Kaylor Kaemba, a sixth-grade teacher at East Mooresville Intermediate School in Iredell County.

“Mooresville Schools also have a ‘see something/say something’ option on our websites, so that others can report things that way, too,” she told CPP.

Steve Yannotti is a recently retired physical education and earth sciences teacher at McMichael High School in Mayodan in Rockingham County. “When we hear of threats or bullying or anything considered to be aggression, we have to report it to the administration,” he told CPP.

“The resource officer is only interested if it involved an unlawful act. The administrators investigate, bring the kid in, and if it’s a credible situation, then they bring in the parents and punish accordingly.”

Tabitha Broadway is executive director of communications for Davidson County Schools. She talked with CPP about how her district handles threats.

“In our district, we treat all threats as if they are credible until somebody proves that they’re not,” Broadway said.

“Everyone understands that each and every threat is reported to the administration, and then the administration reports it to our SROs. We’re very fortunate that in Davidson County, our commissioners and sheriff’s office actually employ Lt. Bryan Grubb, whose primary role is school safety officer, and he oversees the SROs. So, any threats that are made against the school or the students or staff, he becomes involved in.”

“I don’t even think I’d call it a requirement,” Broadway added. “Our folks want to do this. It’s our philosophy and practice. No one wants to make a judgment and have it be a bad judgment and something tragic happen as a result of that.”

North Carolina ranked ninth among U.S. states in the number of school threats in the 2017-18 school year, according to the Educators School Safety Network, which is in line with its population, the nation’s ninth-largest.

Nationwide, the organization said that school threats increased by 62 percent over the previous year.

Most threats appear on social media, with students making eight out of 10. Many of the state’s school systems are now paying for expensive social media monitoring services to alert officials about potential threats. Last fall, the FBI began a campaign called “Think Before You Post” aimed at making false threats.

“We need for students to understand that threats, even hoax threats, are a very serious matter,” FBI Special Agent Frank Nivar told CPP.

“Even if we get a hoax threat coming in, somebody’s going to be charged,” said Wake County Sheriff Gerald M. Baker. “Whether we want to do it or not, we have to stop this because it’s costing too much money and disrupting too many classes.”

Last year, the General Assembly responded with new legislation that went into effect Dec. 1, 2018. General Statute 14-277.6 makes it a felony to threaten to commit an act of mass violence on educational property. That law bolstered General Statute 115C-288, which indicates the procedures for reporting specific offenses to school administrators, and if necessary, law enforcement authorities. According to the Department of Public Instruction, there are 16 crimes that fall under the second statute, including bomb threats but not other types of threats. Now any kind of threat is included.

Orange County Sheriff Blackwood pointed out that many of these threats often come at the end of the school year during exam time in order to disrupt testing.

“While this is not new, the way we respond must be,” he said.

“We cannot take anything for granted when we’re talking about school safety. We must and do take these threats as the real thing. The lines of communication must remain open. This requires trust between each of us, and that trust can be built or torn down in an instance. Students must feel they can talk to us, and the same goes for parents and administration.

“Complacency is something we all have to be aware of,” Blackwood added. “We must work not to allow this to occur by constantly reminding everyone involved that all events matter all the time.” 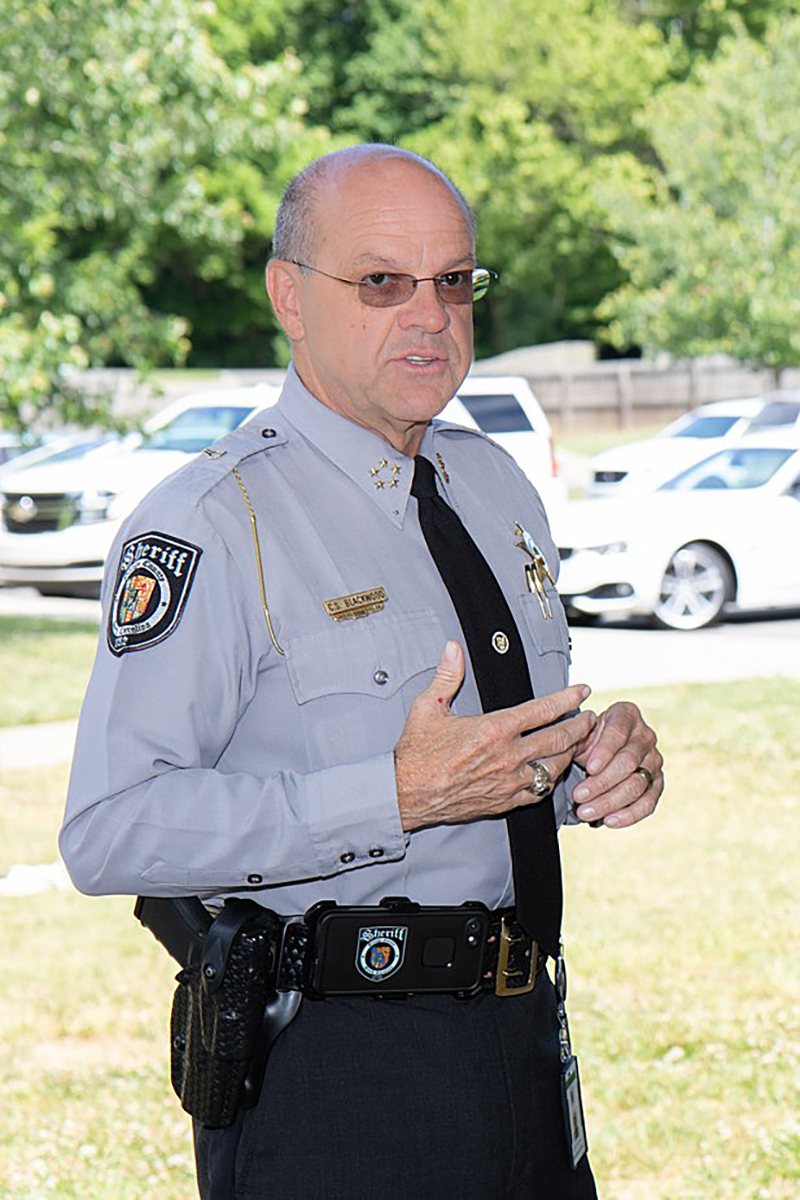 Neill Caldwell is a contributing writer to Carolina Public Press. Email him at neillcaldwell@gmail.com.