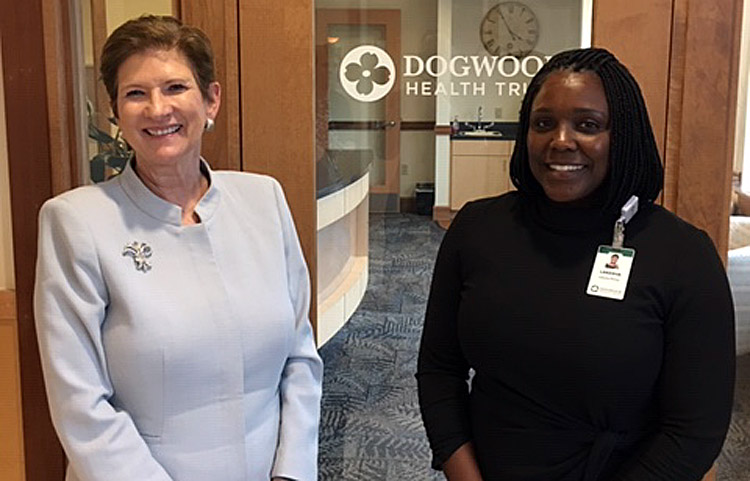 Six months into its existence, the Dogwood Health Trust, a private grant-making foundation whose mission is to improve the health and well-being of the more than 900,000 people who call Western North Carolina home, is beginning to take clearer form with a slate of milestones anticipated in coming weeks and bigger plans ahead.

On Feb. 1, Dogwood became fully operational, created with proceeds from the sale of the nonprofit Mission Health system to for-profit HCA Healthcare. Dogwood holds investment assets of about $1.5 billion and is overseen by 14 unpaid directors. It expects to make grants of up to $75 million annually.

Dogwood’s ongoing grant-making focus is finding big-fix solutions to the “social determinants of health” that can impact an individual’s well-being, including housing, education, employment, nutrition and substance use.

Last week, Janice Brumit, Dogwood’s chair, sat down with Carolina Public Press to discuss where her organization is headed. She was joined by Lakesha McDay, the foundation’s officer for diversity and community outreach.

Brumit shared the following key events expected to occur over the next 18 months:

Dogwood will award grants to nonprofits, health departments and other agencies. It is also committed to spending $5 million per year over five years to address “substance use disorder” as part of an agreement with the state Attorney General’s Office and the N.C. Department of Health and Human Services, Brumit said.

Overall, grant-making will be keyed to three to five strategies that are “really deep and impactful and not just spread our money to the wind,” Brumit said.

“Number one, we are going to be talking to communities and looking at grants that are bold and that are maybe perhaps risky and innovative, as opposed to grants that come to us with the same old solutions to problems.

“So it’s not urban versus rural. It’s about innovation, risk and deliverables, I think, and our board is going to look at it that way.

“One county might not get funded this time, but it may get funded the following year … but we’re going to try to also be fair and be representative of the communities.”

Brumit said Dogwood’s board will be “extremely data-driven.”

“The communities are where the real work gets done; the board cannot dictate to the community what their needs are,” she said.

“The community needs to tell us, but if we have data that says, ‘Yes indeed, what you’re telling us is true and valid,’ we can use that data to validate their ideas and their concerns.”

Some of Dogwood’s grants may be approved over multiple years to achieve maximum impact for a given project.

Beyond grants, Dogwood will work collaboratively with both rural and urban partners, sharing technical expertise and “looking at how do we get other funders to participate in the Western North Carolina region that maybe have not previously,” McDay said.

Dogwood may also be able to zero in on proven programs worth replicating across different parts of the region, she said.

“Hey, this is what’s working,” McDay said. “Is this something that your nonprofits want to come together and try? That’s the power of not looking at it from just a county perspective or numbers or demographic or geographic perspective. It’s the power of looking at Western North Carolina as a whole.”

The independent monitor to be announced this summer is just one of dozens of individuals who will be on Dogwood’s payroll.

In the next few years, “I’d say it’ll land 40-45 maybe,” Brumit said, noting that is about the “national norm” for staffing based on foundation asset size.

At present, Dogwood has a three-year lease with HCA with an opt-out clause for office space at 890 Hendersonville Road in Asheville, where the legacy Mission Health foundation was housed.

“This space would not allow us to have that number of staff,” Brumit said. “We will be, down the road, looking for another home.”

When the Dogwood board was constituted in 2018 in anticipation of the Mission-HCA deal, its composition was criticized by some advocacy groups as being short on diversity.

Asked by CPP to look back, Brumit acknowledged shortcomings.

“Well, I definitely think that we would probably approach it differently,” she said.

Board terms are staggered. Two current members will roll off at the end of this year; a third in 2020.

What would Brumit like to see five years from now?