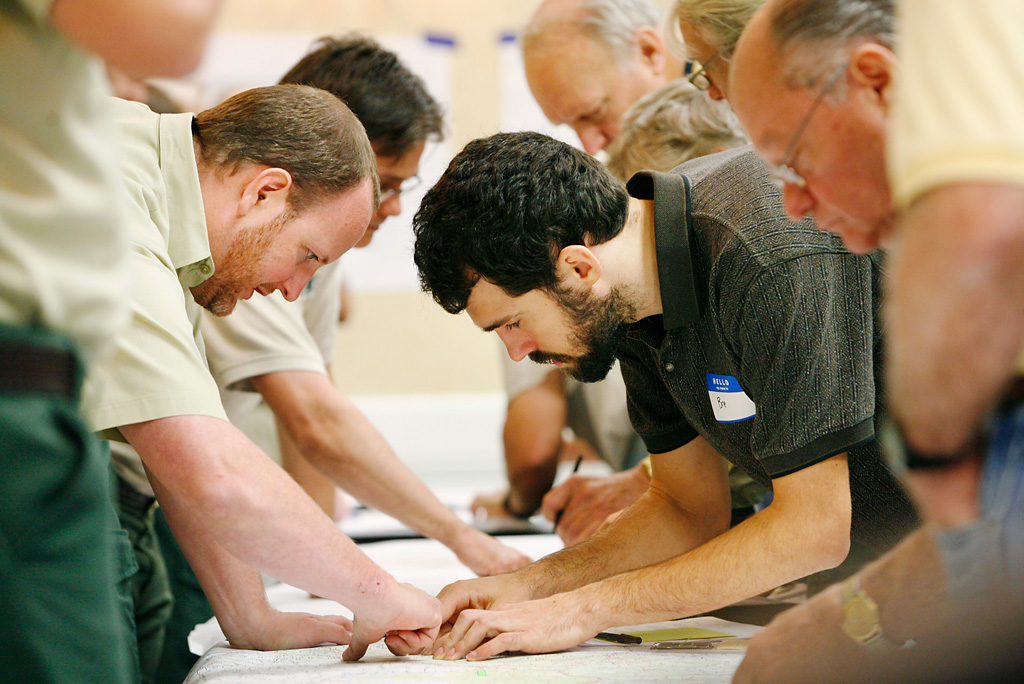 Bre O’Connor, right, is assisted in placing markers representing his concerns about forest mushrooms on a national forest map at a National Forests Plan Revision meeting in July 2014 in Asheville. How often the Forest Service would conduct such public input sessions in the future could be a matter of discretion under proposed U.S. Forest Service rule changes. Matt Rose/Carolina Public Press

The U.S. Forest Service is considering changes to the way it reviews projects in the future, which could have major implications for national forests in North Carolina, reducing both public input and transparency.

The National Environmental Policy Act requires the Forest Service to study the environmental impacts of proposed actions before it makes a decision on projects that include forest restoration, timber harvesting, recreational improvements, infrastructure projects and pipelines, among others.

The Forest Service has said current regulations slow down the implementation and completion of projects. Proposed changes would allow the agency to be better equipped to accomplish its mission to manage the nation’s forests.

However, conservation and environmental groups are alarmed by the proposed revisions to the landmark environmental legislation enacted in 1970.

Following a public comment period that ended Aug. 26, if amended, the proposed NEPA regulation changes could take effect in summer 2020.

“This rule takes the site-specific input out of forest management and takes it behind closed doors,” said Sam Evans, a senior attorney at the Southern Environmental Law Center.

“Public input has been really important to protecting our national forests and frequently improves forest projects.”

According to a “questions and answers” document created by the Forest Service, the proposed rule change would enable the responsible official, such as a district ranger, to “right-size” public engagement to the needs of each project.

The proposed rules also include new and revised “categorical exclusions.” CEs are a list of activities that agencies have determined do not have significant environmental impact and therefore do not require additional environmental analysis.

Among the proposed CEs, Evans said, are areas of timber projects that are smaller than 4,200 acres. For example, the CE would have applied to the controversial Southside Project in Nantahala National Forest, approved last February, which includes 317 acres of forest slated for harvest within the 18,944-acre Southside project area in southwestern North Carolina.

While the project area is greater than 4,200 acres, “what matters is the number of harvested acres,” said Evans.

“Through the process of gathering input, the public encouraged the Forest Service to remove several dozen acres of ecologically sensitive forest stands from the project. Those acres would likely have been logged in the future without public input.”

The new rules, he said, would provide incentives for the Forest Service to apply categorical exclusions to all of its projects.

“(A project area) is discretionary. The Forest Service can split bigger project areas into smaller ones in order to apply this CE. The proposed rule invites that kind of gamesmanship,” he said.

Sharon Friedman, a former assistant director for NEPA for the Forest Service and editor of the blog “Smokey Wire: National Forest News and Views,” told CPP that if Forest Service line officers were to apply a CE, it doesn’t necessarily mean they won’t seek input from the public.

“There are many things that are needlessly complicated that hold the Forest Service up in which they could be conceivably doing more useful things,” she said.

“CEs are a legitimate part of NEPA that agencies are supposed to develop for things they do every day or things that they know a lot about.”

The proposed rules also modify the “scoping” requirements for future projects. Scoping is one of the first steps mandated by NEPA to gather public input. The scoping period provides an opportunity for the public to identify concerns and issues that should be addressed in a project’s environmental impact statement.

Under the proposed rules, the public will continue to be notified of all projects and actions that will be analyzed under NEPA through the Forest Service’s Schedule of Proposed Actions.

“My experience is that, if anything, line officers tend to be supercautious about getting the public involved,” said Friedman.

“In general, I think the Forest Service does a really good job with public involvement. It’s just good practice to involve the public.”

“Discretion is no way to run a public process,” he said. “It needs predictability. The problem is that (Forest Service employees) often move, and there isn’t longevity. The public needs to know how they are going to interact with the agency, but if it changes from project to project no one will know.”

Forest Service Chief Vicki Christiansen said in a statement that the agency does not want less public involvement.

“We want more,” she said. “The proposed changes would continue the robust public engagement that has guided our work for more than a century.

“Regardless of what changes come from the proposal, we will continue our tradition of public engagement and notification when we undertake any major project. Our intent is to invite public participation in our work in the right way and at the right scale.”

Among Evans’ concerns about the proposed rule changes is their impact on national forest land management plan revisions that are required roughly every 15 years.

Currently, Western North Carolina’s two national forests – Pisgah and Nantahala – are in the final stages of a plan revision that commenced in 2012. A draft plan is expected to be presented to the public later this year.

The management plan does not address specific forest projects, such as which trail will be improved or which stands of timber may be harvested, but rather sets the overall strategy of how the forest will be managed for dozens of uses, including recreation, ecological restoration, water quality and economic development.

During the revision of a forest plan, Evans said, forest stakeholders have the expectation that there “is a future process to work out specific project level decisions and work out some of the harder issues. It’s difficult to come up with a planning framework to solve all of those problems at the project level since forest plans are conceptual and abstract.”

Rather, Evans believes the new rules will place the burden on forest planning to settle tangles among stakeholders.

“The new rules put pressure on forest plans to solve conflicts and potentially makes them more adversarial and more likely to go to litigation,” Evans said.

Babete Anderson, a Forest Service press officer, told CPP in an email that agency officials “have the option – and the responsibility – to conduct public engagement depending on the nature of the proposed action, the anticipated environmental effects, and the social and political environment in which they operate.”

For example, she said, a district ranger would likely not treat public engagement for “replacing a roof” or “painting a building” the same as an action to implement “prescribed burning.”

“Public engagement is intended to align with the nature of the proposed action, the degree of anticipated effects, and the likelihood of or potential for public interest,” she said.

“Public engagement is not merely driven by the NEPA process, and many issues are identified and resolved outside of formal planning. Prior to moving a proposed action into the NEPA process, it is not uncommon for the Forest Service to engage stakeholders and other divisions of government in the development of the action itself.  Many challenges are best resolved simply by being engaged with people proactively before even beginning the NEPA process.”

Friedman said it’s not unusual for a Republican administration to seek additional CEs that loosen regulations. However, the development of some of the rule changes may have preceded the Trump administration.

“This regulation has some stuff that career Forest Service employees want and is blended with the stuff that the (Trump) administration might want,” she said.

Evans said that environmentalists had been prepared for the proposed rules but did not expect the scope of the proposal.

“None of the Forest Service’s top level problems have anything to do with NEPA, which are funding, training, and the institutional practice of frequently moving line officers,” he said.

“This (proposal) is the single biggest threat to NEPA and the relationship of the Forest Service to its public since NEPA was enacted.”