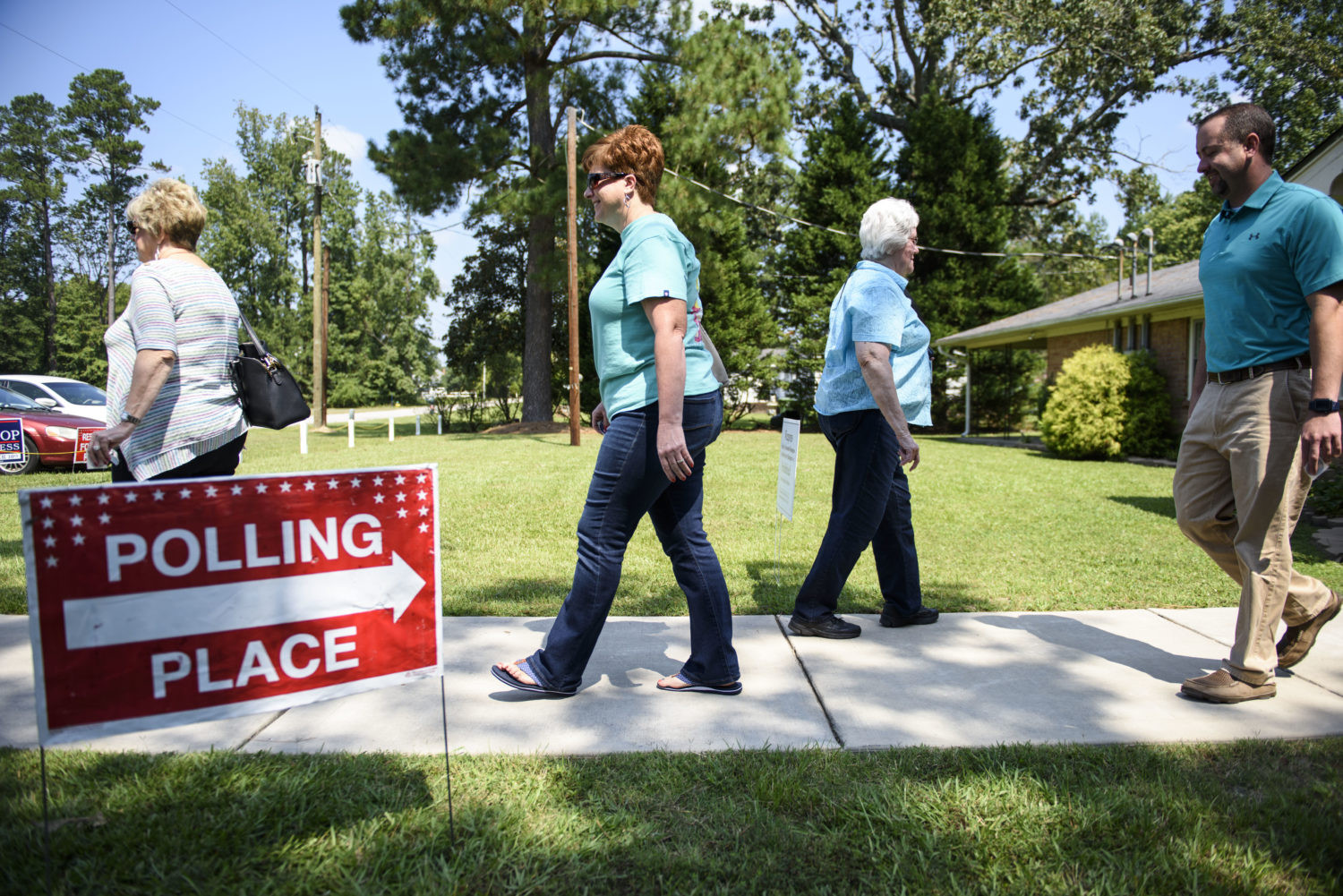 Voters enter and exit a polling station at the Stedman Community Building in eastern Cumberland County on Tuesday. The special election in the state’s 9th Congressional District between Dan Bishop and Dan McCready came after a charges of voter fraud prevent the results of the previous election from being certified. Melissa Sue Gerrits / Carolina Public Press

Two-term N.C. Sen.. Dan Bishop took the stage Tuesday night to the cheers of supporters in Monroe as the winner of the do-over election in North Carolina’s 9th Congressional District, the last race left in the 2018 congressional cycle.

The Associated Press called the race for Bishop, a Republican, shortly after 10 p.m. after he opened up a more than 3,000 vote lead over Democrat Dan McCready. With almost all of the vote reported, Bishop had 94,984 votes to McCready’s 90,824.

According to preliminary results, McCready won almost 56 percent of the vote in Mecklenburg County, but Bishop tapped into the vote-rich GOP stronghold of Union County, winning it with almost 60 percent of the vote. Each won four counties, but were nearly tied in Robeson County, where McCready showed a slight lead with all precincts reporting. In addition to Robeson and Mecklenburg, McCready won Anson and Scotland counties.

Bishop took Union, Bladen, Richmond and was leading Cumberland by a little more than 30 votes with all precincts reporting.

Michael Bitzer, a professor of politics and history at Catawba College, said McCready wasn’t able to take enough votes away in GOP counties to catch up.

“For a Democrat, they can do well in Mecklenburg, but they have to eat into Union County,” Bitzer told Carolina Public Press in an interview Tuesday night.

Bitzer said it also appears that Bishop made gains in the Lumbee areas of Robeson County, which have been targeted by Republicans for the past several cycles.

McCready did well in a district that went for President Donald Trump by 11 points in 2016, but the results on Tuesday underline partisan trends in the state, Bitzer said.

“It shows to me that the intensity of party loyalty and polarization,” he said. “It’s set in stone.”

He said he expects that Trump, who campaigned on election eve in Fayetteville, will point to the results as a victory for his get-out-the-base strategy. 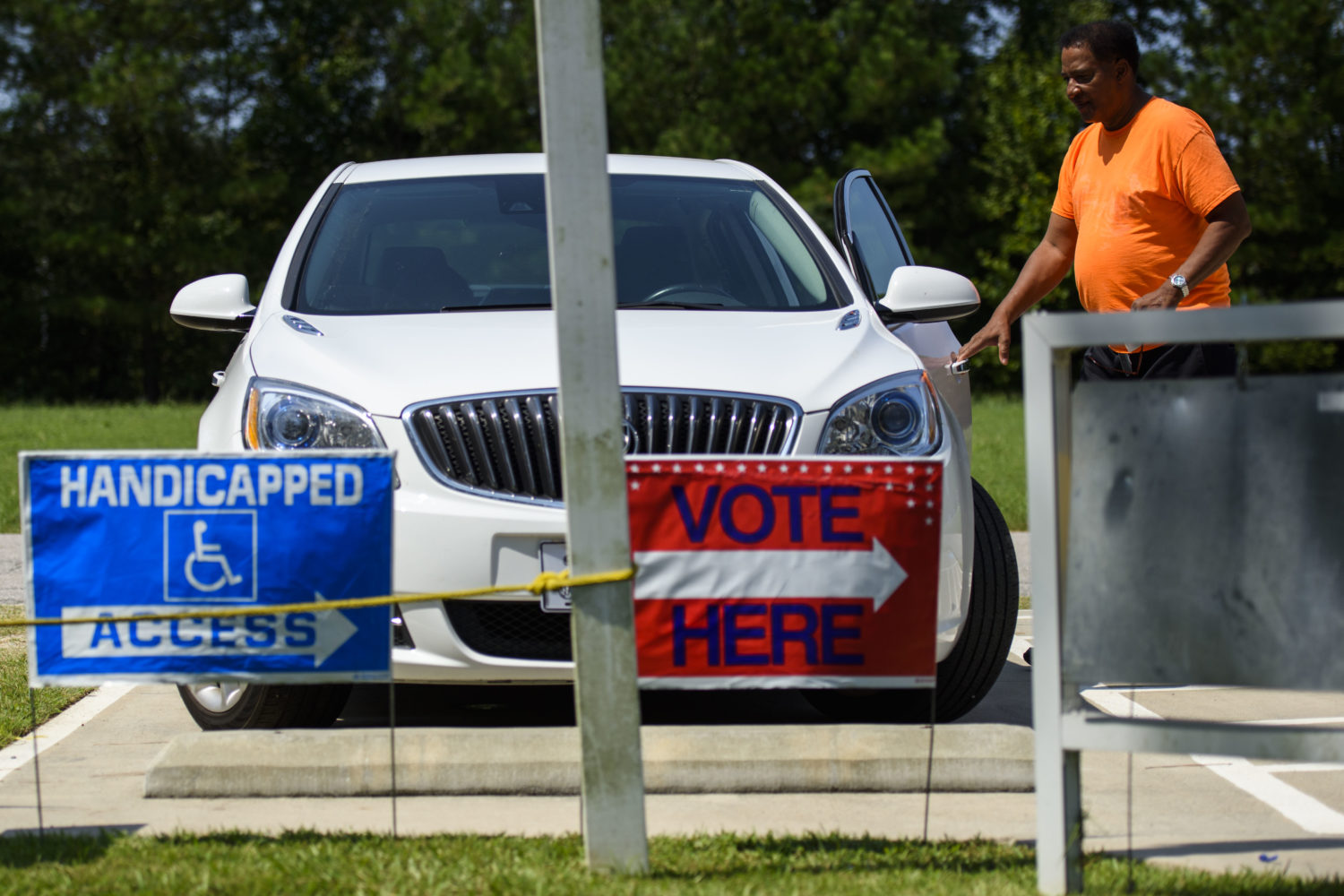 Terry McDonald walks back to his car after having voted in the 9th District special election on Tuesday at the Stedman Community Building in eastern Cumberland County. “It’s your civic duty,” McDonald said. “You must vote, underline that, must vote. In our case it’s cultural to some degree. People died to vote, and I honor that.” Melissa Sue Gerrits / Carolina Public Press

What does election result mean for future?

For now, reading what it means for 2020 is difficult, but the precinct maps of the results show the steady march of Democratic power in Mecklenburg, where the so-called GOP wedge in the southern part of the territory narrowed, and areas across the border in Union County also showed signs of increasing numbers of Democratic voters.

Buoyed by a traditionally strong early vote among Democrats, McCready led through the early hours of returns but began slipping as Bishop’s Election Day votes came in from Union County and other GOP strongholds most of the night, mainly from the initial counting of early votes.

With some absentee ballots yet to be counted, turnout in the race is roughly 33 percent, far below the 53 percent in the November 2018 election. Turnout in May’s 10-way Republican primary was just below 10 percent.

Democrats did not hold a primary since McCready continued on in the contest that he first joined in late May 2017.

His 2018 opponent, Charlotte pastor Mark Harris beat three-term incumbent U.S. Rep. Robert Pittenger in the GOP primary and led McCready by 905 votes at the end of the canvassing period in the general election when state elections officials took the unusual step of not certifying the 9th District race and three others in Bladen and Robeson counties.

During hearings on the race, state investigators detailed an extensive ballot harvesting scheme in Bladen County led by an operative hired by the Harris campaign.

During a dramatic ending to hearings on the case by the state Board of Elections, Harris eventually acknowledged from the stand that the race was tainted, called for a new election and withdrew as a candidate, citing health reasons.

This spring, charges were brought against seven people in Bladen County in connection with the alleged absentee ballot operation.

Also on Tuesday, Republican N.C. Rep. Greg Murphy, of Greenville, defeated former Greenville Mayor Allen Thomas in the special election to fill out the remainder of the term of the late U.S. Rep. Walter Jones Jr., who died in February after a long illness.

Although Thomas, most recently the executive director of the Global Transpark, had long family connections and good name recognition, Murphy won handily in the heavily Republican district, taking almost 62 percent of the vote.

Murphy won easily in most of the counties in the mostly coastal district in the northeastern corner of the state. He won by thinner margins in Dare, Lenoir and Pasquotank counties. Thomas won only Hyde County, the smallest in the district by population.

Murphy, a urologist and former chief of staff at Vidant Medical Center, defeated pediatrician Joan Perry in a runoff in July after the two emerged as the top vote-getters in a wide open primary in April that included 17 candidates.