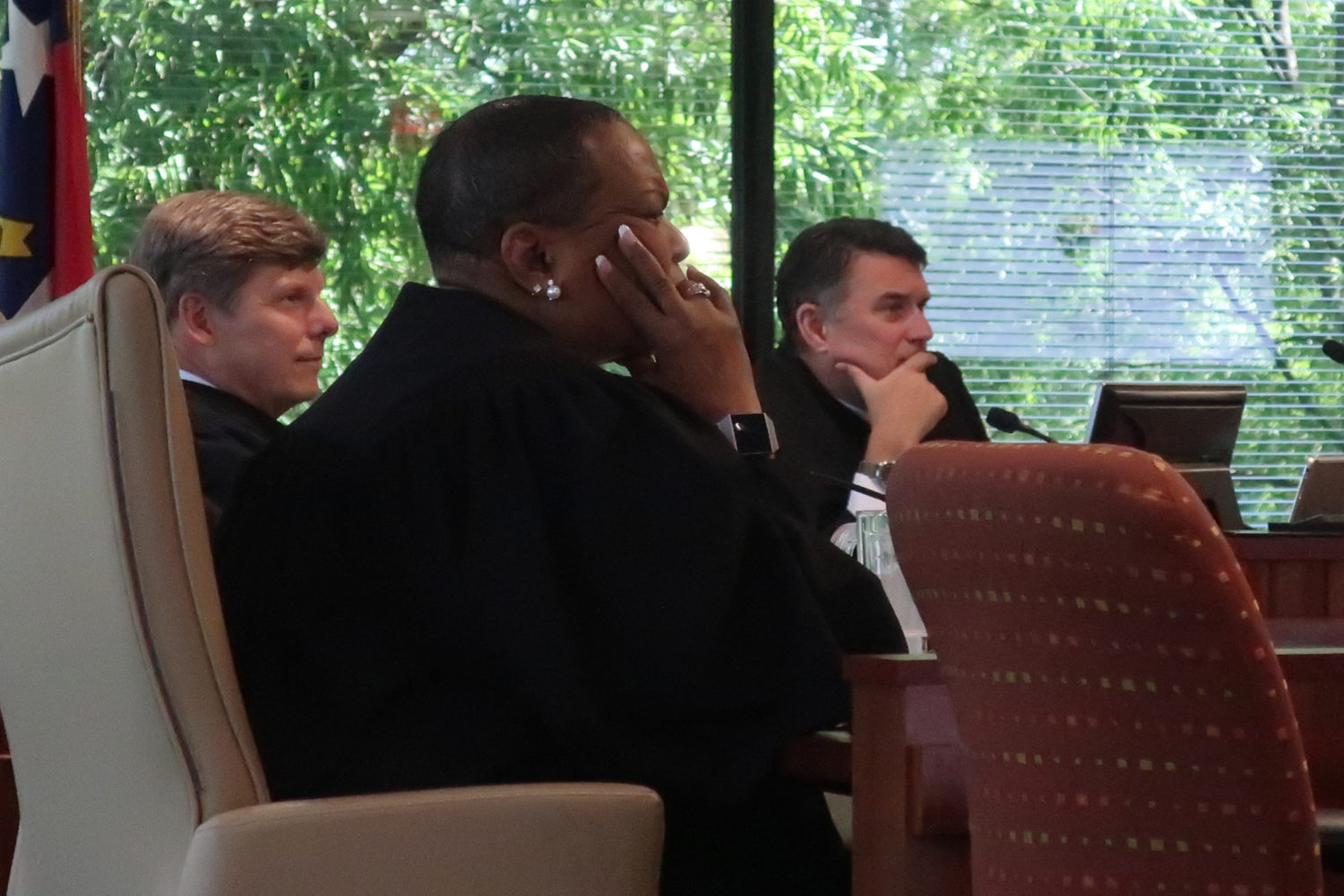 The three-judge panel of Paul Ridgeway, Alma Hinton and Joseph Crosswhite is deciding whether the newly drawn North Carolina legislative district maps are sufficiently nonpartisan. The judges are seen here during the earlier trial in which they struck down the maps under which current legislators were elected. A ruling on the new maps is expected soon. Kirk Ross / Carolina Public Press

With the next election and potential control of the state House and Senate during a critical post-census session hanging in the balance, much of North Carolina’s political establishment is waiting nervously for the next ruling in this year’s redistricting legal fight.

It’s been almost three weeks since the General Assembly submitted new House and Senate maps in response to the Sept. 3 decision by the special three-judge panel in Wake Superior Court in Common Cause v. Lewis, which threw out close to half of the state House and Senate districts.

On Friday, attorneys for legislative defendants responded, filing what could be their last brief in this phase of the case before the judges rule on the new maps.

The plaintiffs assert that the House and Senate used similar processes and called the challenge “a contradictory and incoherent position that is difficult to defend as anything but partisanship in action.”

Much of the most recent back-and-forth centers on the process used to redraw the districts, including whether a file sent out by attorneys for the legislative defendants improperly influenced decisions.

The email, sent to House members and staff on the opening day of the legislature’s redistricting hearings, included partisan scoring for some of the proposed base maps.

In addition to requiring unprecedented openness in drawing the new maps, the judges’ ruling banned the use of partisan data in the redistricting process.

GOP leaders said the emailed data or any other partisan results were not used in the process, but in a response filed on Monday, attorneys for Common Cause challenge that assertion and questioned legislators’ use of outside experts, which also appeared to be in violation of the court order.

For now, the fight appears to be only over House maps, which were passed along partisan lines, unlike the Senate maps, which received more bipartisan support.

Monday’s filing by Common Cause restates objections over proposed House maps for Columbus-Pender-Robeson, Forsyth-Yadkin, Cleveland-Gaston, Brunswick-New Hanover and Guilford county groupings and asks that Nathaniel Persily, a Stanford University professor of elections law, who was appointed by the court to review the plans, draw new districts in those groupings.

But the filing also notes that, given concerns over the process, plaintiffs would not object if the court opted to throw out the entire House plan and start over.

Schedule challenges may await after ruling

If the court accepts the legislature’s new maps, filing for the 2020 legislative elections could begin as scheduled in December.

But if the judges’ ruling rejects all or some of the maps, then it’s likely they would turn to Persily for the new districts. That could lead to a delay in the filing period and potentially, the election schedule itself.

In mid-September, the court requested election timelines and deadlines from the state Board of Elections for dealing with changes ordered by the court.

Candidate filing for the 2020 elections is scheduled to start Monday, Dec. 2, far earlier than in prior years following the decision to move the state’s primary election from May to March. Early voting for the primary is due to start Feb. 12.

On Friday, the Board of Elections filed its response in the form of an affidavit from Executive Director Karen Brinson Bell that set out the timelines for establishing the new districts and preparing ballots.

Bell estimates the time required for “geocoding” the new districts – the process for inputting the new data files for the districts into the elections system – to be between 17 and 21 days, depending on the degree of change that the court’s impending ruling on the new maps requires in each of the affected 37 counties.

The state is required under federal law to get absentee mail ballots out 50 days prior to an election, although the board does have the option to reduce that to 45 days.

Bell estimates that the new districts and the accompanying data would have to be made available to the Board of Elections by early December if the board approves the 45-day option for absentee ballots.

If the new district files are available by the opening of the filing period, there might not be a need for a delay in filing, which can take place while geocoding is still in process.

“Geocoding and candidate filing may occur concurrently, although it is not ideal because the completion of geocoding permits candidates and county boards to verify if a candidate desiring to file for election lives in a particular district,” Bell said in her affidavit.

“It is possible, however, to check candidate eligibility while geocoding is still taking place.”

Ballot preparation, which could take up to 21 days, can’t start until after the geocoding is completed.

If the court’s ruling requires new districts that can’t be completed in time, the court could move the legislative election date to coincide with any runoffs to settle close races in the March primary.

A completely separate legislative election outside of that framework is also possible but would create a number of logistical challenges and a new set of costs, according to Bell, including recruiting enough poll workers to cover required early voting times and making additional arrangements with schools, churches and private businesses that serve as polling locations.

The challenge to state legislative districts isn’t the only redistricting battle in North Carolina.

On Sept. 27, a national redistricting advocacy group led by former U.S. Attorney General Eric Holder filed suit, challenging the state’s 13 congressional districts on many of the same grounds used in the Common Cause suit, including mapmaking performed for the legislature by the late Thomas Hofeller, whose work files exposed the partisan nature of his products during this summer’s trial over the legislative maps.

“The 2016 plan meticulously packs and cracks Democratic voters in each and every district — without exception,” the new lawsuit states.

“Eric Holder’s sue-till-blue endgame is a Democratic legislative majority created by Democratic judges,” Berger said in a statement released after the suit was announced.

To view the maps