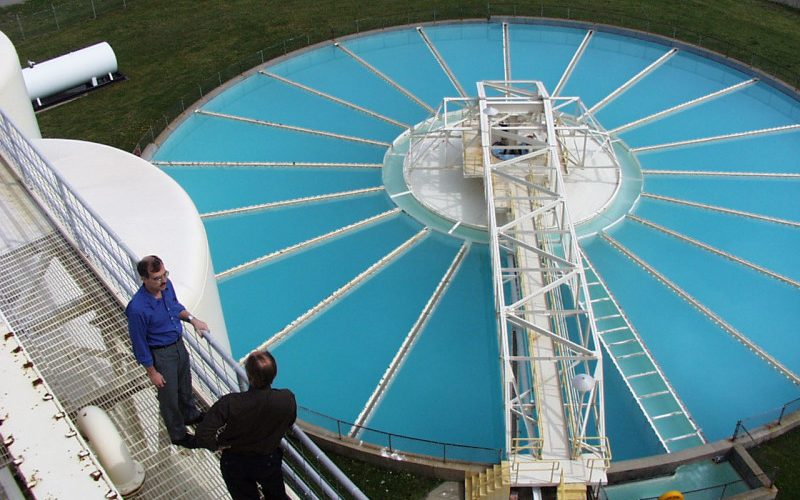 A municipal drinking water plant. Unlike at a private well, water is treated at a central location, then pumped through pipes to residents. DEQ has begun weekly sampling at a plant in Greensboro due to a chemical discharge affecting the Cape Fear Basin. Photo courtesy of Wikimedia Commons via North Carolina Health News.

Shamrock Environmental Corp. is the Greensboro company responsible for discharging an unspecified amount of the likely carcinogen 1,4 dioxane into the Cape Fear River basin, the state Department of Environmental Quality said in a statement released Tuesday afternoon.

Officials with Shamrock Environmental were unable to be reached for comment.

The DEQ released the company’s identity a day after NC Health News published a story saying state environmental regulators and Greensboro officials would not name the company. Greensboro provided the DEQ with the company’s name Tuesday, said Sharon Martin, a DEQ spokeswoman.

In the DEQ’s statement, Martin said that, although Shamrock Environmental was responsible for the release of the federally unregulated chemical, “the discharge permit for the pretreatment program is held by the City of Greensboro and DEQ is pursuing appropriate enforcement for all identified permit violations.”

The statement says Greensboro indicated that the discharge was “detected and ceased and city officials are cooperating with the investigation. As a result, DEQ has initiated weekly sampling for 1,4 dioxane at Greensboro’s wastewater treatment plant.”

Martin directed other questions concerning the discharge to Greensboro officials.

Mike Borchers, assistant director of Greensboro’s Divisions of Water Resources, said in an email that the city does not know how much 1,4 dioxane Shamrock Environmental released. He said the release “was a failure of their source control process.”

Borchers said the city reported the discharge through the monitoring protocol established by the state. He said the city took additional samples in mid-August to ensure that the industry had taken measures to eliminate the source of the release.

“We are continuing to work proactively with the state and the industry to minimize the potential for future releases,” Borchers said.

Shamrock Environmental discharged the 1,4 dioxane on or before Aug. 7, the date that the city of Greensboro took a sample at its wastewater treatment plant that later was found to contain 957 parts per billion of 1,4 dioxane. The chemical, which dissolves easily in water, is commonly used by industry as a solvent and a solvent stabilizer. It can be found in paint strippers, varnishes and other household products.

The EPA’s cancer risk assessment for 1,4 dioxane is 0.35 parts per billion. A person drinking that level of the contaminant over a lifetime stands a 1 in 1 million chance of getting cancer. At 35 parts per billion, the risk of developing cancer increases to 1 in 10,000.

The level discovered on Aug. 23 in Pittsboro’s treated drinking water was 107 parts per billion, more than 300 times the EPA’s cancer risk assessment. The contamination found its way into the Haw River, where Pittsboro gets its drinking water, before it was detected at elevated levels weeks later in drinking water for Fayetteville, Wilmington and perhaps other cities that draw their water from the Cape Fear River.

There remains little research on the health effects of 1,4 dioxane to humans, but laboratory studies on animals show that repeated exposure to large amounts in drinking water, in the air or on the skin causes liver and kidney damage. The EPA is still in the process of fully evaluating the risk that 1,4 dioxane poses to the environment, animals and humans.

According to the DEQ, Greensboro didn’t notify the state of the release of 1,4 dioxane until Sept. 27, at least a month after the city became aware of the contamination.

Wilmington officials said they learned of the spike in 1,4 dioxane on Sept. 23, four days before Greensboro notified the state. A DEQ spokeswoman said last week that by the time regulators learned of the contamination, it was too late to notify downstream utilities.

Mick Noland, the chief operations officer for the Fayetteville Public Works Commission’s Water Resources Division, said he asked the DEQ on Oct. 3 for details of the discharge. He said Monday that he still hadn’t heard from the state.

Tuesday afternoon, Noland said he was pleased that the DEQ named the company.

“Looks like we may be getting some of the transparency that’s been missing on what’s happening with the industries that are discharging the 1,4 dioxane,” Noland said in an email. “This is definitely a step in the right direction.”

Wilmington officials say elevated levels of 1,4 dioxane have been detected in their drinking water source four times this year.

It is not known what types of punishment Greensboro could face if the DEQ finds it violated the city’s industrial pretreatment program permit.

In an email, Martin said “DEQ is investigating and will take appropriate enforcement action for all identified violations of the permit held by the City of Greensboro.”

It is extremely difficult and costly to filter 1,4 dioxane out of drinking water. The Cape Fear Public Utility Authority in New Hanover County is one of only a few in North Carolina that has a filtration system capable of removing about two-thirds of the contaminant.