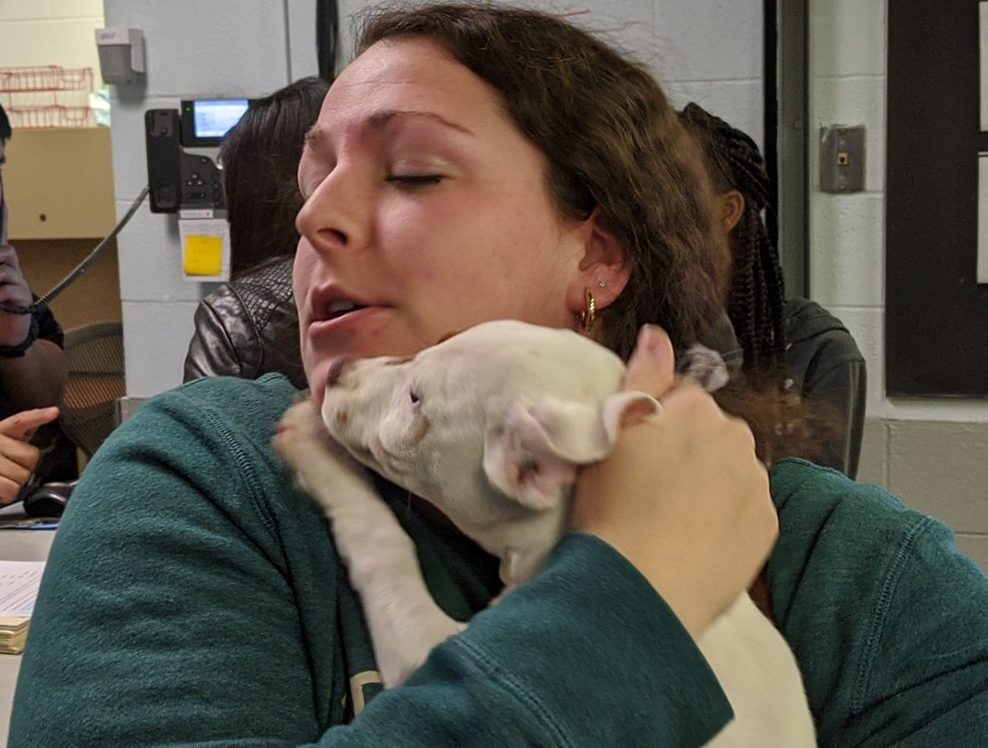 “Sadie Mae” accepts a hug from Faith Cicero as she prepares to adopted the dog from the Charlotte-Mecklenburg Police Department’s Animal Services shelter. State inspectors in North Carolina routinely check on the compliance of both governmental and private shelters with animal welfare laws. Photo courtesy of the Charlotte-Mecklenburg Police Department.

Several animal organizations — both registered and unregistered — have received warnings, financial penalties, denial of permit applications or even revocation of their existing registration. While many of the facilities facing disciplinary action are privately owned, several animal shelters operated by local governments have also been cited by state inspectors this year. The inspectors also oversee businesses such as pet-groomers that operate temporary kennels.

In each case, state inspectors try to strictly enforce the law, with the welfare of the animals in mind. Closing a shelter could leave animals with no place to go on short notice, so inspectors generally work with facilities to find solutions, according to state officials and shelter operators who talked with Carolina Public Press.

In the best cases, a shelter that has been cited for problems can correct issues and be restored to good standing. In other cases, an initial state citation may not have the desired effect.

In Pollocksville in Jones County, Top RJ’s Rescue & Rehab Shelter drew particular attention for continuing to operate after its registration was revoked, according to documentation from the N.C. Department of Agriculture and Consumer Service’s Veterinary Division.

Nearly a month after Top RJ’s was issued the notice, state inspector Patricia Sholar discovered that the shelter had only moved seven of its 35 animals.

“In addition, the numerous and severe violations of the N.C. Animal Welfare Act continued to be present,” the veterinary division wrote in a letter to the shelter on May 23.

“Of particular concern was the untreated, apparently painful, eye infection of the tan dog, which had cherry eye in the other eye. The volunteer informed the inspector that the shelter did not have the funds to have the dog treated by a veterinarian.”

The inspector also found that “one dog did not have water available to it in its enclosure, and the only water given to the dogs is water that has been sitting in direct sunlight in plastic gallon jugs for a day or longer,” according to the letter.

The state commanded the shelter to make sure the animals had shade and that all animals were removed within 30 days.

CPP attempted to contact Top RJ’s earlier this month, but the organization has not responded.

Also receiving a notice of revocation this year was the New Bern-based Colonial Capital Humane Society. In March, the organization was also one of five across the state to be assessed civil penalties in 2019.

Also receiving civil penalties for various problems identified by inspectors this year were:

Serious issues have also arisen with unregistered organizations, some of which were seeking permits that were denied due to inspection findings.

In the case of Ruby’s Misfits Animal Rescue in Jacksonville, operator Jennifer Watson was told that the facility’s compliance inspection failed and the organization’s registration application was denied.

The February letter from Dr. Patricia Norris, director of the animal welfare section of the veterinary division, contains a list of violations it found Ruby’s to have committed. Registration denial was “due to the number and severity of areas of noncompliance with the N.C. Animal Welfare Act and its associated regulations,” according to the letter.

Ruby’s was told it could not keep any animals at all without receiving a fine of up to $5,000.

“The brick building heating system was broken, so there was no heat except an electric heater in the office today,” according to the inspection report.

“The temp was 52 (degrees). There were two dachshunds in a small plastic carrier in the lobby of this building today. The metal building where eight dogs were housed had three portable heaters plus a gas patio heater. None of these meet electrical code.

“No dog should be able to reach an electrical cord or outlet. The rescue was advised of the need for an HVAC system if they house dogs in the metal building. A refrigerator is needed for perishable food. All open or broken bags of dry food and treats must be stored in a sealed container. Hot water must be available in the metal building. The perimeter fence needs to be installed. The facility must establish hours for review.”

The report on Ruby’s Misfits contained many other complaints.

“I noted that there was no water available to any of the 10 dogs seen in the facility today,” the inspector noted.

“I advised the director who was present during the inspection, but the director showed no interest in filling the water bowls. All dogs and cats are required to have continuous access to clean drinking water unless there is a medical problem that prohibits such.”

Ruby’s Misfits was not alone in being turned down due to inspection problems.

Matthews-based Peanut’s Place Small Breed Rescue received a notice of warning in November, with the letter saying it ran an unlicensed pet shop.

Despite egregious problems in a few cases, violations are often due to misinformation or a lack of funding rather than willful neglect, state officials told CPP.

The state works to determine what is best for the animals on a case-by-case basis, according to Heather Overton, assistant director of the N.C. Department of Agriculture and Consumer Services public affairs office.

“Penalties, warnings, denials and other actions are determined through the willingness of the owner/operator to comply with the Animal Welfare Act and by looking at the totality of circumstance,” Overton said.

“We take everything we know about a situation into consideration. This includes previous violations and previous knowledge of the owner.”

If owners know their operations violate animal welfare laws and continue anyway, that’s not going to sit well with state inspectors, she said.

“In some cases, the owner or operator may have had no knowledge of violation – we take that into consideration too,” Overton said.

“Finally, we consider the extent of the violation, was harm done to the public or to animals and the level of willingness on the part of the owner/operator to work towards compliance.”

Not all bad news

While many of the letters the state sends are full of warnings, it sometimes gets to relay happier news.

Friends for Animals had a few ups and downs but largely avoided letters from the state. It received a notice of warning in November 2016, a notice of civil penalty in August 2018 and a suspension letter in November 2018. The reinstatement came in late January 2019, shortly after a new inspection.

“On Jan. 15, 2019, inspector Lindsey Harris, an animal health technician with the AWS, reinspected the shelter,” Norris wrote on Jan. 29.

“The report from this facility inspection notes that the shelter has addressed and corrected most of the concerns detailed in the Notice of Suspension of Animal Shelter Registration and Notice of Violation. The report also notes that the shelter had plans to complete the corrective actions to resolve the remaining issues regarding the puppy isolation room. Based upon these considerations, inspector Harris recorded the inspection as being ‘approved.’”

The state wrote that the approval was contingent upon the shelter coming into compliance but noted its cooperation.

“On Jan. 28, 2019, the shelter indicated that the corrective actions for the puppy isolation room had been completed, and, in addition, the sink would be installed very shortly.”

Between health issues and recently hired employees still acclimating to the position, the shelter became difficult to keep up.

The building also needed an “overhaul,” Keller said. With animals housed in the shelter, closing for renovations would be difficult.

Keller also finds the Animal Welfare Act to be “vague,” adding that a lot is up to the individual inspector’s opinion.

“You don’t get an opportunity to argue or to discuss the issues until after the inspection, not during the inspection, in a lot of ways,” he said. “In that sense, it makes it an ongoing learning process as you are operating.”

But the inspections also point out issues that shelter staff or volunteers may not be aware of. In the case of willful neglect, it can prevent the mistreatment of animals.

Value of state oversight for shelters

The civil penalty of $7,000 that the shelter had received in 2018 was waived due to the shelter’s efforts, he said.

“The oversight is good,” Keller said.

“We did not pay a fine. That was because we got the animals out of there, we rebuilt the building, fixed everything, made big improvements on things the state wanted to see, and at the end, the fine was waived. We spent probably between $20,000 and $30,000 getting things up to today’s standards.”

The forced shutdown gave the shelter the time it needed to complete the renovations.

As Keller noted, coming into compliance is an “ongoing process.”

While the shelter has done work on the floors and drains as requested by the state, the constant spray of water and cleaning materials takes its toll, he said. He has been working on permanent solutions to both problems and is in the process of replacing the drains.

The shelter also hopes to form a grant team that will work on finding funding to provide permanent solutions to the issues, Keller said.

Sometimes, a change in routine is needed.

“You get your (inspection) report, you get your pass or fail, you make your adjustments on the run,” Keller said.

He praised the state’s communication and availability with the shelter.

“They know that we have our hearts set on being top-notch,” Keller said. “It’s not a fight between us and the state.”