Some seniors raising grandkids find the social safety net wasn’t designed with food for their families in mind.

North Carolina ranks fifth in the nation for having the most seniors and children who don’t know where their next nutritional meal will come from as they grapple with food insecurity.

For most in those two age groups, work isn’t an option. Federal food assistance programs like WIC and SNAP weren’t always designed with their specific needs in mind. Seniors say they make too much money to qualify for food stamps. Children age out of WIC assistance at 5-years-old.

They look to food pantries and free meals at schools to bridge the gap, but advocates across the state agree there are voids in the bridges — large gaping holes that many fall through, partially created by indifference. 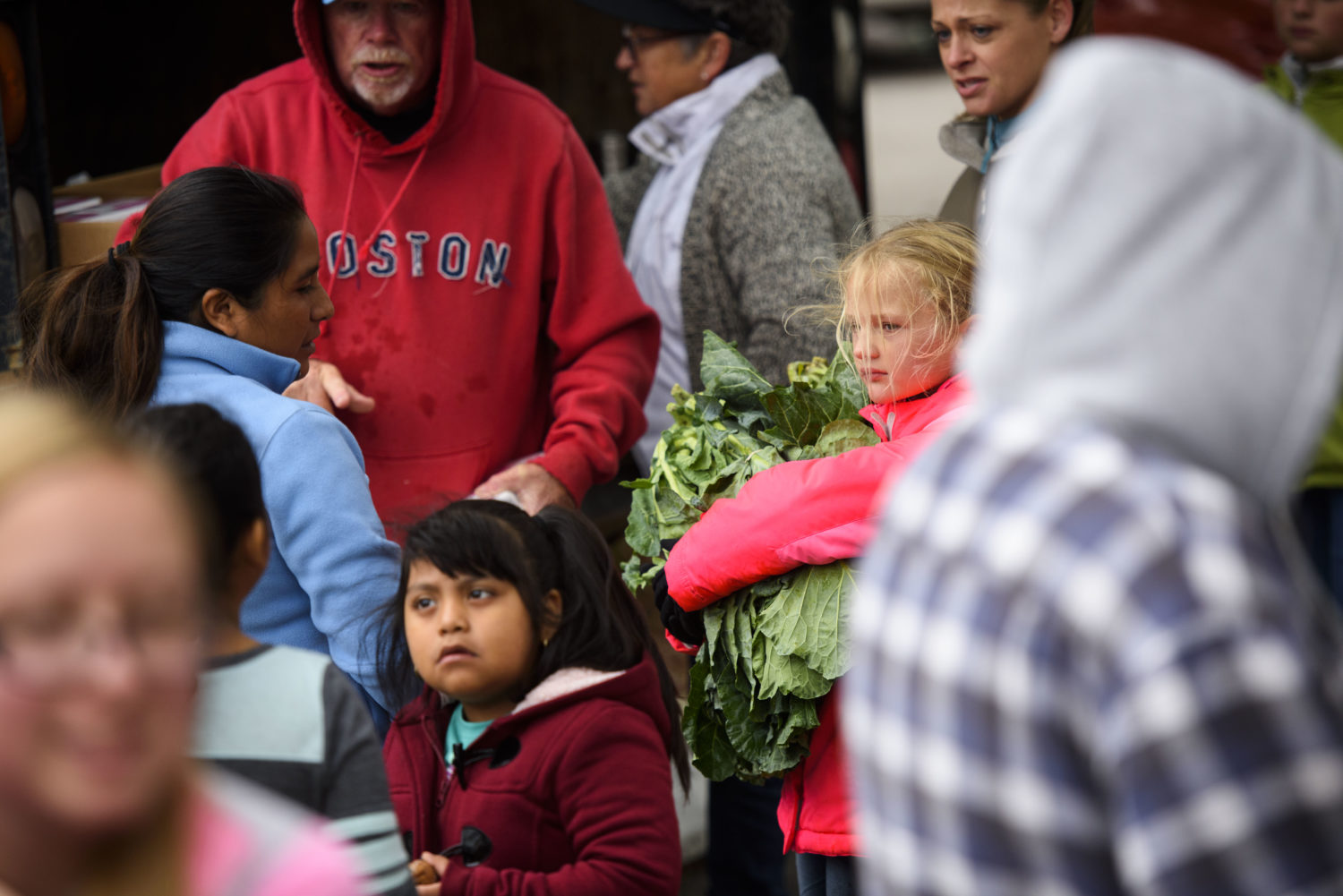 Julie Pittman, a teacher at Rutherfordton-Spindale Central High, said she can relate, having grown up in a troubled home and knowing hunger at a young age. Pittman said that hunger affected her abilities in the classroom when she was a child.

“What my teacher did not know was that at 5-years-old, I had witnessed my father try to murder my mother,” Pittman told a crowd at a Child Hunger Leaders Conference in Chapel Hill Feb. 13.

Then, Pittman said, she met a teacher who made a difference. The teacher greeted her kids with love, snacks and the occasional lunch money for those who needed it.

“She understood that feeding the body meant that she could feed our minds and every day she met us with an ‘I love you’ and that was feeding our soul,” Pittman said.

Pittman was named the 2018 Western NC Teacher of the Year. She uses the experiences from her youth to make sure other children don’t go hungry on her watch just like that teacher who inspired her.

“Education is not about filling a pail,” Pittman said. “Education is about lighting a fire … and there are fires all over this state.”

In Rutherford County, where Pittman teaches, she says the nutritionists go the extra mile to make sure they have breakfast ready for all of the kids who need it, whenever they need it.

“They make early breakfast for kids who may be coming in to do activities before school,” Pittman said. “They make sure that we have breakfast in the classroom for some classes … because they know that there are some kids in advanced placement classes who need to eat early. They have breakfast after the bell because they know in high school there are kids who are not ready to eat at 7 o’clock in the morning, who may come to school late because it’s all they can do to get their three brothers and sisters up in the morning because their mom is still at work.”

And, at lunch, Pittman says they provide a “share table,” full of leftovers, where kids can grab extra food for later in the day.

Share tables, breakfast in the classroom, grab-and-go meals, food kiosks and free meals through the U.S. Department of Agriculture’s Community Eligibility Provision are giving more and more students access to nutrition than ever before in North Carolina, but advocates say more is needed.

The nonprofit organization No Kid Hungry N.C. lists 10 ways people can help fight child hunger on its website through volunteering, donating, organizing, transporting and advocating for the state’s youngest population.

‘Baby Boomers’ line up for help

Senior citizens are lining up for assistance at food pantries, soup kitchens and community tables across the state -— and their numbers are growing.

“It used to be about 11 percent of our total numbers were seniors, but now it’s more like 15 to 20 percent of the people that we see are seniors,” said Mary Pritchard, who coordinates the South Brunswick Inter-Church Council food pantry in the coastal town of Shallotte.

The rate of food insecurity among the elderly now sits at 10.5 percent in North Carolina. Only four other states list higher percentages.

Multiple reasons, some varying by location, are contributing to the uptick in senior hunger. Some say a dependent younger generation is draining the elderly population’s finances. Some seniors say they’re being impoverished by rising medical costs.

Some advocates say it’s because more and more seniors are now raising third and fourth generations on fixed incomes, thanks in part to the opioid epidemic. Still others point to the rising number of seniors as a group.

“The senior population is growing nationally and in North Carolina,” said Kelly Haight Connor, a press assistant with the NC Department of Health and Human Services. Research attributes the increase in food insecurity rates to many things, she said, “but primarily, there was a decrease in wages and overall net worth after the recession in the late 2000s.”

Many seniors lost massive amounts of money in 401K plans that went belly up in the stock market dip “and as they’re entering retirement, they didn’t have the time to recover,” Haight Connor said. “Most of them can’t rely on Social Security income and can’t receive Medicare until they are 65.”

The many factors working against seniors have fueled a perfect storm that’s hard for the older generation to weather.

Today, one in five – more than 2 million people in the state – are age 60 and over, according to the N.C. Coalition on Aging Priorities. Roughly one in 10 of them, more than 200,000, are living in poverty.

“This is important because you are more likely to develop an illness like cancer or heart disease — both often linked to your overall health — when you live in poverty,” Haight Connor said.

“For low-income seniors, they are facing spending trade-offs such as utilities, health costs, housing and transportation.”

By 2033, about one in four North Carolinians will be over the age of 60, and people over 85 will be the fastest-growing population group, according to the Coalition on Aging Priorities.

“The senior population is set to double over the next decade so … there will be more folks who are in need of resources,” said Jessica Whichard, director of communications at the Food Bank of Central and Eastern North Carolina.

“We know that in our 34-county service area about 49,000 senior citizens fall at or below the poverty level so we kind of anecdotally assume that’s our targeted number of people we want to be able to serve.”

Food pantries across the state are helping along with Meals on Wheels and community meal sites for seniors, but there are other things that can help.

An increase in food security screenings might also be in order, she added, as well as referrals to local community resources that can help.

A state senior hunger forum or coalition could also be a driving force to discuss issues and potential strategies for seniors needing assistance, Haight Connor said.

“Seniors are on a fixed income,” Whichard said. “If they are working, a lot of times it’s lower wage jobs, maybe not that salary that they had beforehand. A lot of times now we’re seeing that they’re taking care of their grandchildren.”

Food pantry and community meal organizers across the state say they’re seeing that a lot.

“We have a lot of grandparents raising grandchildren in this county. Lots,” said Kathleen Burns, a former social worker and mental health worker, who started Bryson City’s first community meals site, The Giving Spoon, in February.

It’s really hard for grandparents, Burns said, “because they don’t get a lot of support. They’re on fixed incomes and a lot of times they’re elderly.”

In many counties, such as Swain where Burns is located, the elderly and children under the age of 18 make up more than 40 percent of the population. So, what happens when the state’s two most vulnerable age groups have to rely on each other?

“I would say my biggest struggle is finances,” said Linda Sunderman, who has raised her 6-year-old granddaughter practically from birth. “We live on love.”

The Harnett County woman drained her savings to legally adopt the child when her mother became entangled in drug addiction. Sunderman said she tried to get food stamps to help.

“What do you get for that amount of money?” Sunderman asked.

She hasn’t had to seek the assistance of a food pantry yet, but she can relate to the struggles of the other seniors in her Grandparents Raising Grandchildren support group.

Evelyn and Richard West, in the same group, are raising their great grandchildren. Richard West is battling cancer. They say they worry every day about what may happen to their little ones if something should happen to them. Retirement wasn’t supposed to be this way.

“We had bought us a camper,” Evelyn West said. “We were going to travel a little bit. That’s what our plans had been to do. And then ….”

She received a phone call one night from someone who told her the police and social workers were at a house where her great granddaughter’s mother was living. The baby was going to be placed in protective custody and with a new family.

“I said, ‘I’ll be there in about five minutes. I’m going to take that baby,’” Evelyn West said.

She says they tried to get food stamps, too.

Sunderman has an idea. What if the Women, Infant and Children’s program applied to the many grandparents now raising babies in their golden years?

It doesn’t. It only applies now to mothers with children under the age of five. But Sunderman said she can’t help but wonder what if?

That would be great, she said, “because you would get your milk and your eggs and your cereal and it would help so much.” 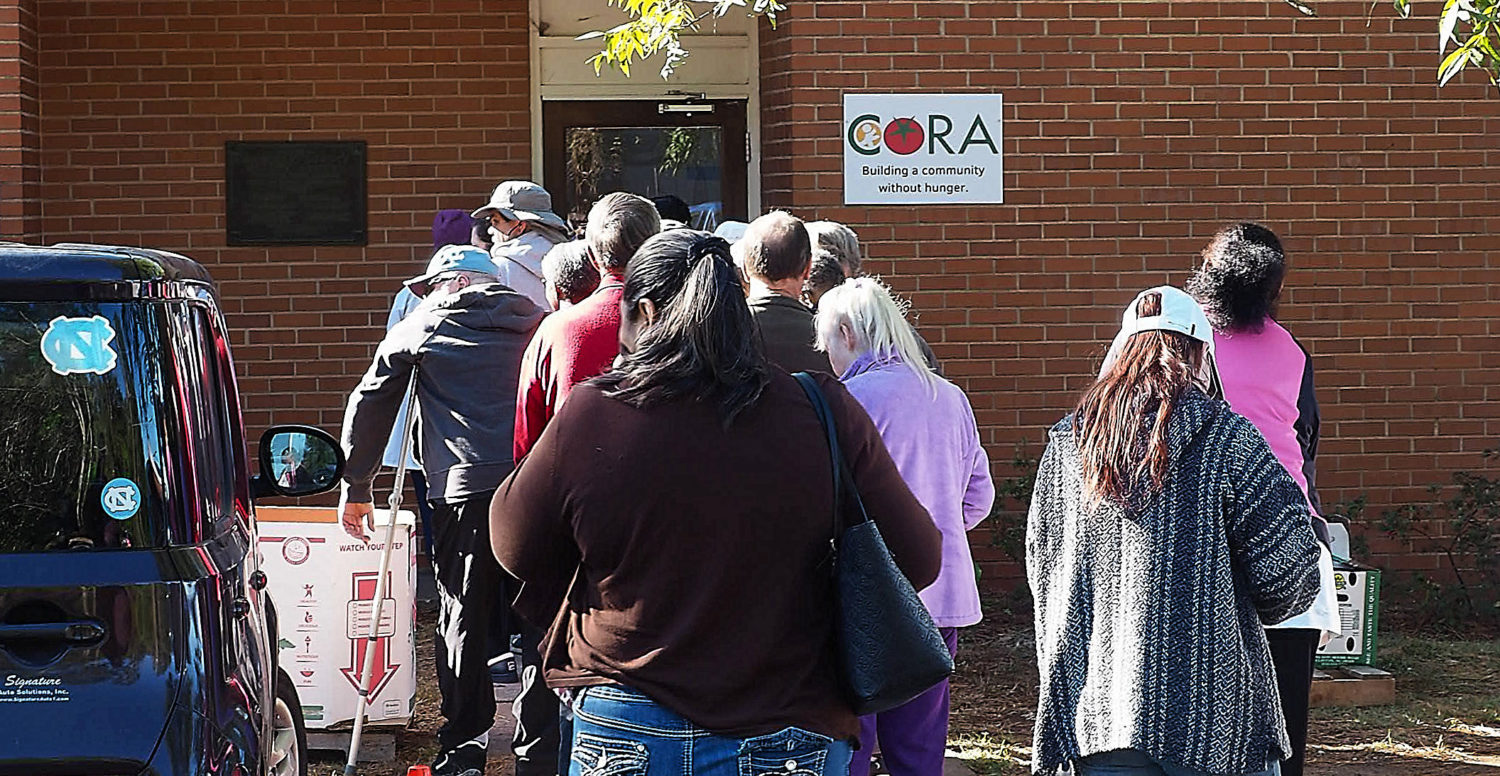