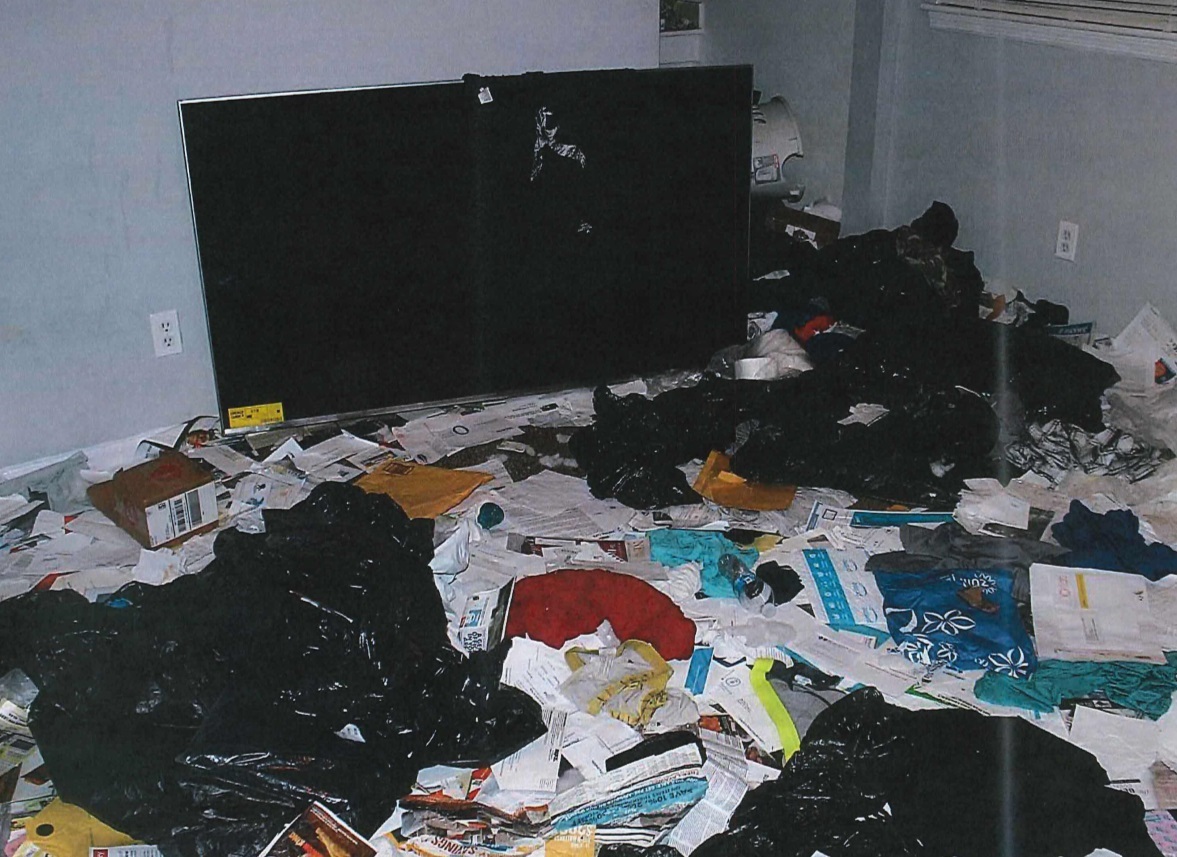 Every room in Erik Magana’s apartment was strewn with hoarded mail belonging to other people, according to federal authorities. Magana received a federal prison sentence for mail theft and aggravated theft on Tuesday. Photo courtesy of the US Department of Justice

Sprawling stacks of paper, envelopes, boxes and other material littered the rooms of Erik Raymond Magana’s Charlotte apartment where the U.S. Department of Justice says he hoarded mail – other people’s mail.

The 34-year-old Mecklenburg County resident received a federal sentence Tuesday of 42 months in prison plus a year on suspended release because of the thousands of pieces of mail he has admitted to stealing as part of a plea deal on charges of mail theft and identity theft that he accepted last year.

He will also be required to pay $77,304 in restitution to the banks he used to convert stolen checks: SunTrust and Wells Fargo. But the government’s sentencing memorandum estimated an intended loss of $546,713 for the items he took from 1,300 known mailboxes and potentially many more that remain unknown.

This does not include valuables the government reported finding in his residence and on his person, including a $233,000 undeposited IRS refund check belonging to someone else.

Magana targeted mostly affluent neighborhoods of Mecklenburg and Gaston counties, as well as the Fort Mill, S.C., area, according to the Department of Justice.

Magana’s mail theft spree ran from “at least” 2016 to 2018, according to the Department of Justice, which also described “a large number of mail theft complaints with the Postal Service Inspection Service” from victims around Charlotte.

While authorities found a large amount of mail at Magana’s apartment, the Postal Service Inspection Service reported recovering stolen mail dumped in cul-de-sacs. A receipt with Magana’s name on it found in one of these dumps helped draw the attention of authorities.

A theft victim also made a video recording of someone driving a dark Mercedes-Benz rifling through mailboxes overnight. A partial license plate in the video helped identify Magana.

Later, postal inspectors reported placing a tracker on Magana’s car for about a week, during which he was tracked driving around Charlotte-area communities on mail delivery days. Postal inspectors also said they personally observed him seizing mail.

Exactly how many people were victims of Magana’s mail and identity theft schemes remains unclear.  “The government was challenged in ascertaining the names of all of the victims and the full scope of stolen check because the defendant’s apartment was unsanitary,” the Government Sentencing Memorandum said, later adding that many of the thousands of items in Magana’s apartment were “soiled by bugs, maggots or dog feces.”

“This was the largest recovery of stolen mail conducted by the (U.S. Postal Inspection Service) in the Charlotte region in at least 15 years,” said Department of Justice spokesperson Lia Bantavani in a statement released Tuesday.

U.S. Attorney Andrew Murray credited the U.S. Postal Inspection Service of Charlotte, the Charlotte-Mecklenburg Police Department and the Charlotte Financial Crimes Task Force for their joint work on the case.