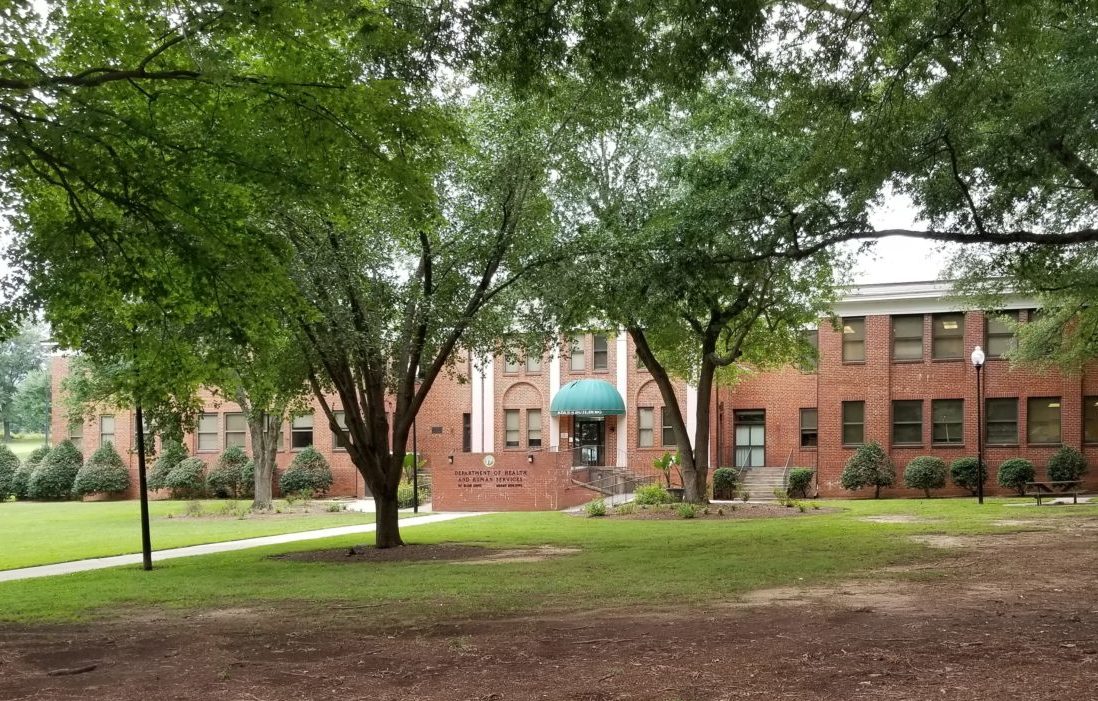 The North Carolina Department of Health and Human Services, including the Division of Health Services regulation that monitors adult care homes, is housed on the campus of the former Dorthea Dix state mental hospital in Raleigh. An independent reviewer’s annual report last year on the state’s compliance with a federal settlement found that DHHS is not on track to do enough for adults with mental illness to comply by a mid-2021 deadline. Frank Taylor / Carolina Public Press

North Carolina is not on track to meet its mid-2021 deadline for compliance with a 2012 legal settlement with the U.S. Department of Justice over inadequate housing and services for people with mental illness, according to an annual independent reviewer’s report released late last year.

While the state made substantial improvements since the previous report in late 2018, independent reviewer Marti Knisley found that these only addressed some areas. In other areas, the state is running out of time seven years after agreeing to the settlement and may not be able to correct its course before the clock runs out, the report and an accompanying compliance chart show.

“The state is not making sufficient progress to meet Community-Based Mental Health Services requirements in the Settlement Agreement,” Knisley wrote in the 2019 report.

“Broadly stated, the state is required to develop and implement effective measures to prevent institutionalization and to provide adequate and appropriate public services and supports identified through person-centered planning in the most integrated setting appropriate to the needs of individuals with (serious mental illness), who are in or at risk of entry into an adult care home.”

Despite the ominous tone of the report, the N.C. Department of Health and Human Services issued a press release about the report in November that struck a celebratory note and gave no indication that the state is on the verge of failure to comply with a federal settlement.

Adult care homes provide housing to adults with a range of mental and cognitive disorders, including dementia and mental illness. They are not retirement centers, “old folks homes” or nursing homes and can house adults of any age.

In the 2017 investigative series Questionable Care, Carolina Public Press found serious concerns about the oversight system for such homes in North Carolina. The state’s four-star rating system for homes appeared to serve mainly the marketing interests of the adult care home industry and used legalistic checklists to score facilities during inspections.

County and state inspectors applied inconsistent standards across 100 counties. While DHHS spokespeople told CPP that the agency had the ability to crack down on inappropriate activity at adult services agencies at county departments of social services, in practice they had no recollection of the state agency ever exercising that authority.

Despite hundreds of county and state officials employed specifically to “survey” adult care homes routinely and cases of complaints, CPP found that they were allowing facilities with shocking squalor, hazards, negligence and other abuses to remain open, sometimes with zero-star ratings. Fines lagged months behind the worst inspections. In one case, a McDowell County facility that faced the highest fines on record at that time filed a lawsuit to block the state’s regulatory action, and the state agreed in 2016 to make the negative inspections go away, despite admitting no fault on the part of inspectors.

The 2012 federal settlement does not focus on the conditions and regulation of adult care homes, but on the lack of adequate other options for adults with mental illness, many of whom follow a direct path from hospitalization to adult care homes.

State’s response to questions about report

“This (independent reviewer) report noted that the (N.C. Transition to Community Living Initiative) met its annual housing requirement for the first time since 2014,” the DHHS press release said.

“The independent review noted that NCDHHS has provided leadership to improve the management, budgeting and oversight of the program.”

Summing up the state’s progress in six of the areas covered by the settlement, the DHHS press release described “substantial progress in the first three of the six areas” and “significant effort” under all areas, calling these steps “a meaningful leap.”

Noting that DHHS has “until 2021 to achieve its goals in all six areas,” the press release said the agency is “committed to building on present momentum and working with all its partners to do so.”

CPP asked DHHS in a Jan. 14 email why the state issued such a rosy statement about a report saying that the state is on track to fail to comply with a federal settlement. DHHS spokesperson SarahLewis Peel responded Jan. 17 by reiterating some of the positive points addressed in the earlier release, but did not address the question.

Peel’s response also failed to answer or acknowledge the following questions CPP sent to DHHS in the same email:

Knisley talked with CPP about the chances that North Carolina will still meet its obligations under the settlement.

She expects it to be “crystal clear” by mid-2020 whether the state has taken enough corrective steps for providing services and housing to correct its course and meet the deadline next year.

While she agreed that the state is legitimately “encouraged” by its own recent progress on annual housing numbers, Knisley did not back away from her finding in the report that the state remains on a track that would not result in compliance.

“I can only comment on what I find and what I see,” she said.

Asked about what happens if the state fails to comply fully by the deadline, Knisley noted that this is not an unusual situation, even though full compliance is preferable.

The parties – NCDHHS and the U.S. Department of Justice – would likely work out a plan to reach compliance on remaining issues as quickly as possible, with the courts admonishing the state for its shortcomings.

Knisley noted that several other states, which had been party to similar settlements and badly missed compliance, have been disappointed if they expected to avoid consequences from the courts and federal authorities.