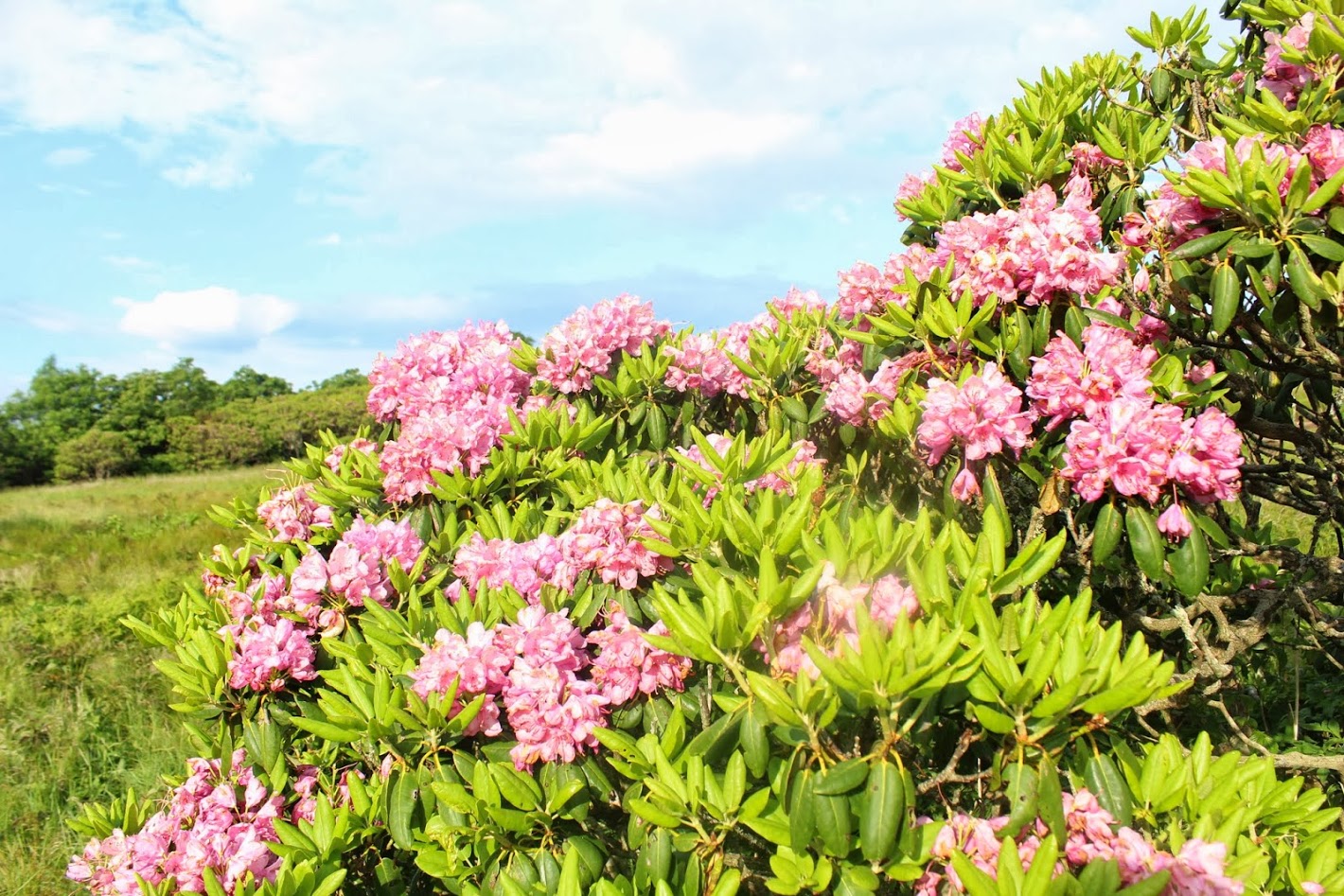 Rhododendron may be beautiful along high slopes in Western North Carolina forests, but they’ve spread there from their natural river-bank habitats due to climate change. Highly flammable, they increase the risk of wildfires. They are one of many complicated issues in managing the region’s national forests. Jack Igelman / Carolina Public Press

The release of the proposed management plan for the Nantahala and Pisgah national forests on Feb. 7, 2020, is the culmination of a process that began in 2012 and has been followed closely by Carolina Public Press since the beginning. This list of answers to “Frequently Asked Questions” is intended to help with the complex issues and concepts surrounding the national forests and their management.

What is the Nantahala and Pisgah National Forests Proposed Land Management Plan?

A single plan guides the management of Western North Carolina’s two national forests: Pisgah National Forest and Nantahala National Forest. Two other national forests in North Carolina, the Uwharrie and the Croatan, are not affected by this plan. When the plan for Pisgah and Nantahala is finalized, it will oversee more than a million acres in 18 mountain counties. The plan will set overarching goals and desired conditions to achieve social, economic and environmental well-being for the forest, but the forest plan doesn’t approve any site-specific projects.

What was released on Feb. 7?

What is a national forest, and who is impacted by the plan?

The mission of the U.S. Forest Service, a division of the U.S. Department of Agriculture, is to sustain the health, diversity and productivity of the nation’s forests and grasslands to meet the needs of present and future generations. National forest management emphasizes striking a balance in land-use planning among competing values of recreation, timber, watershed protection, wildlife and fish, and wilderness.

Due in part to its multiuse mandate, management of the national forests will have innumerable implications for Western North Carolina residents, the economy and the environment.

The plan could have a broader impact in some parts of Western North Carolina than others. Counties in the state’s southwestern corner would be among those most directly affected because such a large portion of them is within the national forests. For instance, 70% of land within Graham County is federally owned. 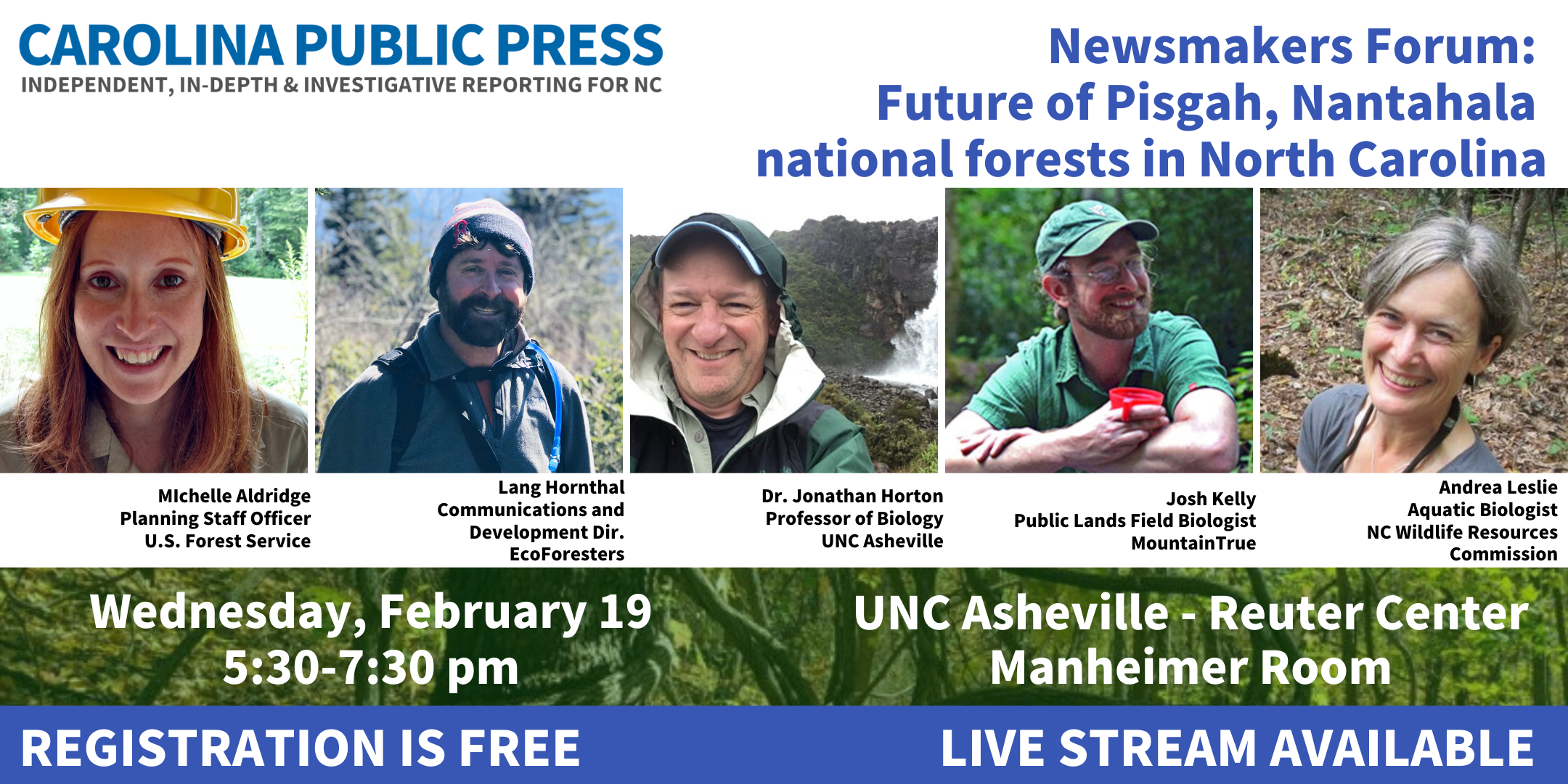 Join Carolina Public Press for a free public forum on the future of the Pisgah and Nantahala national forests, either in person or via a live stream. RSVPs are required. Go here to learn more and reserve your seat.

How long did it take to prepare the draft plan?

The revision process began in November 2012. The original timeline was to release a plan draft in June 2015. For a full timeline, please click here.

Who made the plan?

Western North Carolina’s two national forests are managed by the National Forests of North Carolina, a statewide national forest office in Asheville. In addition, several groups formed to support and provide input during the forest planning process, including the Nantahala-Pisgah Forest Partnership, the Fish and Wildlife Conservation Council and the Pisgah-Nantahala Stakeholders Forum.

Was the public involved in the creation of the plan?

Until 1976, the public was excluded from participating in the process of deciding when, where and how to manage public lands. The passage of the National Forest Management Act of 1976 became the central legislation governing the management of the nation’s public forests and mandated public involvement.

Why did it take so long?

In September 2018, the U.S. Forest Service told Carolina Public Press that the release of the draft was delayed due to the enormous volume of public comments that the agency is required to evaluate. In addition, this plan is among the first in the nation to adopt and employ new federal planning guidelines that mandate more public involvement, early and often.

Past federal legislation and new planning guidelines developed in 2012 (known as the 2012 planning rule) dictate that the Forest Service must listen to the wide range of stakeholders and users while employing the best science available to revise a plan.

Does the draft plan address harvesting timber from the national forests?

How and where to conduct timber harvests have been significant issues in the plan revision. There are sharp divisions in public opinion over when, where and how timber harvesting should occur. Sportsmen are interested in more timber harvesting to improve game habitat, and the timber products industry desires more access to timber within the forests. Preservationists, however, desire more protection of ecologically sensitive forests, such as old-growth timber stands.

However, one area where multiple groups with conflicting interests seem to intersect is the ecological restoration of the forest — that is, using a range of management practices to restore the ecological health of the forest by using techniques, such as controlled burns or timber clearings, to replace spontaneous natural disturbances caused by wildfire or weather.

Will the plan designate rivers as Nationally Wild and Scenic Rivers?

The draft plan can set aside rivers that are eligible for National Wild and Scenic River protection. Forest planning cannot designate a stream as wild and scenic — it requires an act of Congress and the president’s signature.  Based on public comment and the best science available, the Forest Service evaluated the characteristics of the rivers in the wild and scenic rivers inventory and will present a list of recommended eligible streams in the draft environmental impact statement.

Will the plan designate land to the National Wilderness Preservation System?

The forest plan alternatives in the draft include recommended land for inclusion in the National Wilderness Preservation System. Whatever the Forest Service recommends, approval will depend on congressional action. The positions of U.S. Congress members who represent potential wilderness areas can be expected to have a substantial effect on the outcome of the political process.