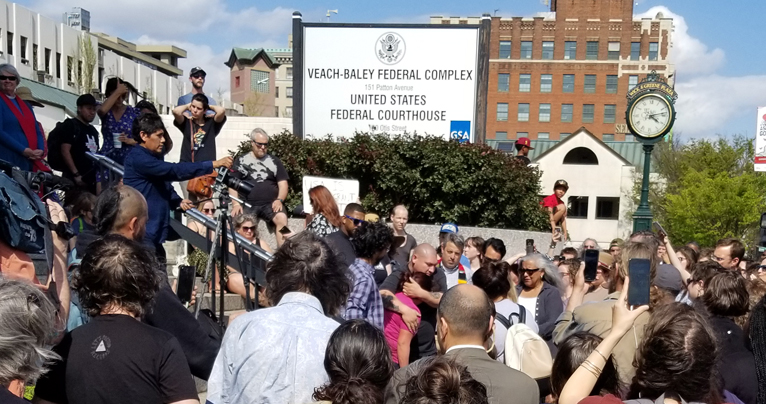 Immigrant advocates hold a press conference on the federal courthouse steps in Asheville in 2018. Last week, an immigration advocacy group in North Carolina held a press conference online only, due to the coronavirus crisis, which has heightened concerns about treatment of undocumented workers. Frank Taylor / Carolina Public Press

When U.S. Immigration and Customs Enforcement agents pulled over an undocumented man in Cary late last week, the incident sent a shock wave through the state’s immigrant community, amplifying the mistrust and fear many have of the federal government amid the largest national public health crisis to grip the U.S. in more than a century.

Across North Carolina, advocates say the new coronavirus pandemic is magnifying vulnerabilities already faced by one of the state’s most marginalized workforces, many of whom live paycheck to paycheck, lack access to health care and are not eligible for unemployment or other federal benefits.

But while advocates said they were not aware of any positive cases among communities that they work with, they are bracing for that possibility while also trying to bridge gaps in communication about the virus as well as in services to try and keep people healthy.

Confirmed cases of COVID-19 are assigned to states and counties geographically based on the patient’s permanent residence, not the current place of residence or where the test was administered.

A spokesperson for the N.C. Department of Health and Human Services told Carolina Public Press late Friday in tracking tracking COVID-19 cases among the state’s large population of immigrant workers, including those who are undocumented, it is following CDC guidelines, under which DHHS is assigning any positive tests to the U.S. county of residence for these individuals.

Many undocumented people who work in hotels and restaurants have lost jobs or seen their hours severely cut across the state, advocates said.

To help counter those losses, Magaly Urdiales, a co-director for Western North Carolina Workers Center, based in Hickory, said the organization is setting up a rapid response fund.

“Many of these workers are head of the house,” she said.

But workers in industries that have not shut down remain at risk from the virus’ spread through crowded conditions. Hunter Ogletree, who also helps to lead the WNC Workers Center, said he’s heard of poultry plant laborers working shoulder to shoulder in shifts lasting up to 10 hours, despite pleas from health officials to practice social distancing.

“They’re running the line and production as normal,” Ogletree said, adding that workers have received “minimal advice,” including to stay home from work if they feel sick.

“Even that’s not good advice because workers, they don’t have paid sick leave, so they’re going to come to work if they’re able to come to work despite the fact that they might feel sick,” Ogletree said.

The lack of protections extends beyond meat processors.

“I think the challenge is that the agricultural system is not set up for a pandemic,” Lariza Garzon, executive director of the Episcopal Farmworker Ministry, said.

The Dunn-based ministry advocates for those who labor on farms, in meat processors and packing plants as well as in nurseries in Sampson, Duplin, Johnston, Lenoir and Wayne counties.

“We’re worried about the mental health of a population that was already under a lot of stress,” Garzon said.

“So, for those families who are either undocumented or have mixed-status family members in the family, we’re worried about the constant fear and the constant issues that they experience because of their immigration status.

“We also are working with a community that was already experiencing a lot of stress because of the 2018 hurricane, so a lot of the families have not been able to recover.”

The organization has scheduled a drive-thru food bank for Saturday and, though the group often gets 70-120 families, it’s bracing for more, Garzon said.

“I think there’s going to be an economic crisis that is going to highlight the inequality that our society already has,” she said.

Garzon’s concerns also include the health and safety of seasonal farmworkers, some of whom are already arriving, she said.

Many are living in camps with shared facilities, with little privacy and without transportation. If someone tests positive for the virus, isolation could be a challenge.

“How are they going to be isolated when they live in a camp that maybe has 30 guys there?” Garzon asked.

“How are they going to be provided a private bathroom? That’s not the current way in which camps work. Workers share bathrooms, and they share rooms.”

Garzon said she speaks daily with other advocacy groups to coordinate efforts and is working to provide reliable information in Spanish.

She also cited misinformation she said she’s seen about the virus, including that eating garlic can be a cure — a rumor she said is not exclusive to the largely Latino community she represents — and said more interpreters are needed in clinics beyond normal working hours.

“I think that we need for the state government to come up with a plan on how they’re going to prioritize the health of agricultural workers in the states because they are essential workers and our economy really depends on agriculture,” she said.

Lack of information in Spanish is an issue that Siembra NC is also working to counter, Willis Garces said.

When a Spanish-speaking woman tried calling the Guilford County Health Department with concerns about her husband’s cough and fever, instead of getting answers, she got passed around for about a half-hour, he said.

“I don’t know if she hung up or they hung up, but she said, ‘It didn’t work. I couldn’t get through,’ and we had given her that number because that’s what we were told,” Willis Garces said.

The county’s Health Department does offer Spanish options, and it was not clear what happened in that instance. A spokesperson for the county did not return phone messages from CPP.

The state DHHS links to COVID-19 briefings in both English and Spanish, and its text-based 211 system is offered in Spanish. But text messages link back to information in English and a Spanish-based reader must scroll to find those links.

To help provide accurate information, Willis Garcas said Siembra NC is translating information and graphics put out by local agencies and sharing other resources. A livestream with a doctor from Cone Health about the virus on the organization’s Facebook from last week has been viewed more than 7,000 times.

“We have a lot of people who trust what we say about other topics, and so we figured we’ll try to use that to support public health in this time and to encourage people to do basically what the (Centers for Disease Control and Prevention) is saying and the state’s saying, because otherwise there just aren’t a lot of credible voices, especially not from the federal government, that they can trust, who are telling people to take this seriously,” Willis Garcas said.

Fears of reprisals against undocumented residents

While advocates say they are working to address the community’s immediate needs, there’s also a lingering fear that coming forward for testing for the virus might lead to later detention and deportation.

The March 18 Cary stop, which was criticized on Siembra NC’s Facebook page, only served to erode that trust during a critical time, Willis Garces said.

“I think that that’s one of the big concerns we have right now is we all need to be united against this pandemic, against the virus, and doing everything we can, and at least one agency in the federal government is doing a lot to encourage part of the population to not do that, to not take it seriously, to not pay attention, basically,” Willis Garces said. “Because how can you trust the federal government if they’re doing one thing and saying another?

Concerns about the spread of the virus in ICE detention facilities are also stressful for families of detainees, including several from North Carolina. On Thursday, Siembra NC held an online press conference to draw attention to conditions at the Stewart Detention Center, an ICE facility in Georgia, where detainees say the conditions are ripe for the easy spread of  COVID-19.

A detainee at the Bergen County Jail in Hackensack, N.J., tested positive for the virus earlier this week, ICE said.

ICE’s website says it is continuing enforcement operations during the pandemic, though it does not conduct them at doctor’s offices or other medical facilities without prior approval or under extreme circumstances.

ICE spokesperson Lindsay Williams told Carolina Public Press that the agency has not stopped enforcement actions but on March 18 scaled back amid the pandemic to focus on public safety threats and those who’d be subject to mandatory detention.

“For those individuals who do not fall into those categories, (Enforcement and Removal Operations) will exercise discretion to delay enforcement actions until after the crisis or utilize alternatives to detention, as appropriate,” Williams wrote in an email.

ICE’s website also says it does not conduct enforcement operations at doctor’s offices or other medical facilities without prior approval or under extreme circumstances.

Editor’s note: This article has been updated twice to include late responses to CPP’s question from DHHS and ICE and additional clarification from DHHS.