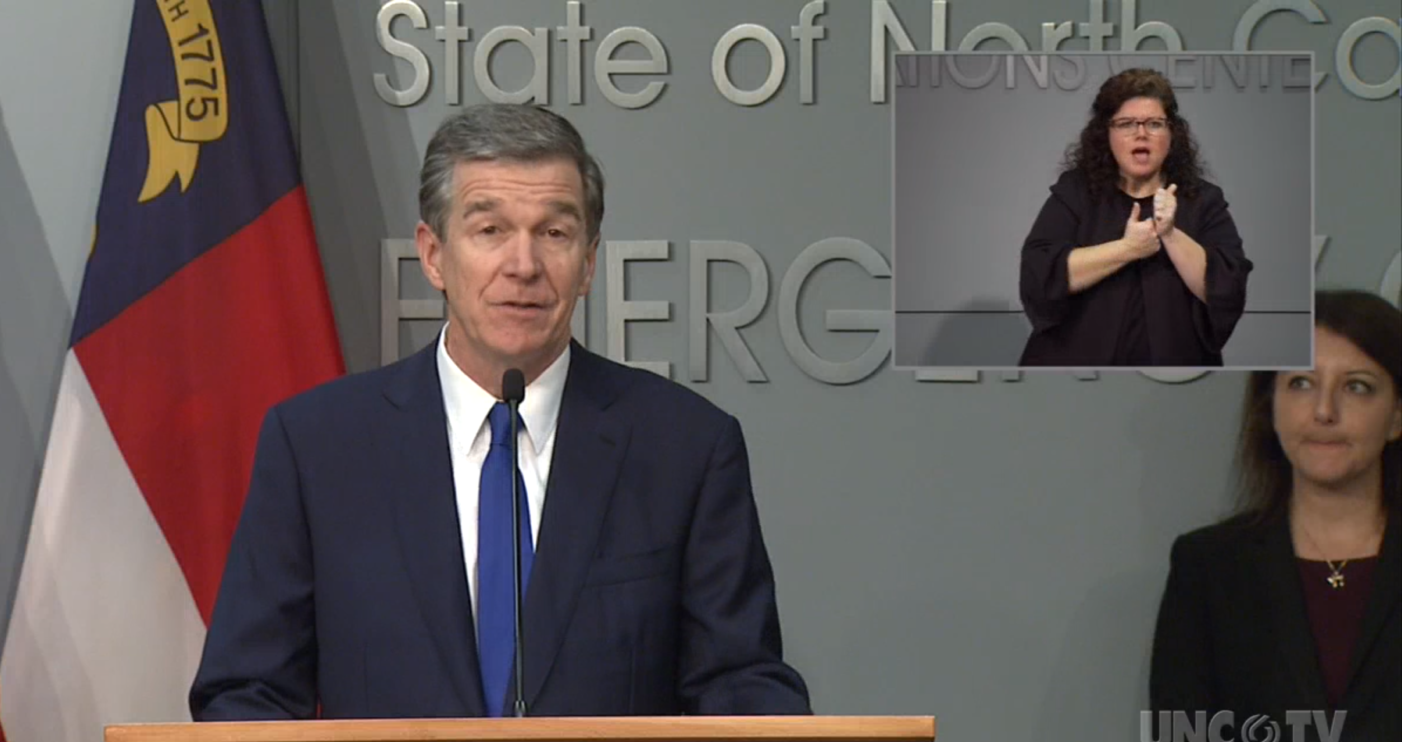 NC Gov. Roy Cooper announces Friday a statewide stay-at-home order due to the spread of coroanavirus. The order will go into effect at 5 p.m. on Monday. Screengrab from UNC-TV.

Starting at 5 p.m. Monday, North Carolinians are expected to stay at home for at least the next 30 days to slow the spread of the novel coronavirus, Gov. Roy Cooper announced Friday afternoon.

“To continue our aggressive battle to slow the spread of COVID-19, today I have signed a stay-at-home order for the entire state of North Carolina.” Cooper said.

“It’s what we have to do to save lives. It has the force of law.”

Even if residents think they won’t get sick, Cooper implored everyone to consider the nurses, doctors and hospital staffs, who will be “stretched beyond their capacity if we are unable to slow the spread of this disease.”

Confirmed cases in the United States surged past Italy’s and China’s highs. As of Friday afternoon, there have been more than 1,475 deaths across the country due to complications from COVID-19, according to the Johns Hopkins University of Medicine.

Data coming out of Italy and China is “sobering,” said Dr. Mandy Cohen, Secretary of the North Carolina Department of Health and Human Services.

“While these studies don’t give us the complete picture of the virus, they are certainly very worrisome,” Cohen said.

Several organizations representing doctors and hospitals, she said, have warned about “potential shortages of supplies in equipment and hospital beds,” she said.

“No one wants that to happen. The only way to prevent that is for fewer people to get sick at the same time.”

Under the governor’s stay-at-home order, people are expected to remain on their own property, except for essential tasks like grocery shopping, helping loved ones, exercising outside while staying at least 6 feet away from others, and for those who have work deemed essential.

All gatherings with more than 10 people are explicitly banned.

While several other counties and cities across the state have already enacted similar orders. In the case of a conflict, N.C. Department of Emergency Management Director Mike Sprayberry said, the more restrictive order applies.

Anyone who violates the order can be charged with a class 2 misdemeanor. However, Cooper said, law enforcement should first talk with people.

“If people continually and flagrantly violate the order, law enforcement and district attorneys can under their discretion charge that person and prosecute that person,” Cooper said.

Efforts taken now to avoid crowding and socializing will later staunch the flow of critically ill patients who are expected to crowd into hospitals around the state, experts in disease transmission have said.

Symptoms of COVID-19 include fever, chills and shortness of breath — but anyone can carry the virus and spread it to others, even those who show no symptoms at all.

Nearly two weeks ago, Cooper made the first of what has become ever increasing restrictions on public gatherings. On March 14, Cooper by executive order closed schools across the state and banned all gatherings of more than 100 people.

“Most of the public health officials will tell you we are going to be dealing with this for a while,” Cooper said. “There is not going to be a quick, short-term cure for this. We need to try to flatten the curve, and try to keep our medical system from being overwhelmed.”

The order will largely supersede the patchwork of conflicting stay-at-home orders in counties and municipalities across the state that have been enacted in recent days. Whichever policy, state or local, is the most restrictive on a specific topic will apply.