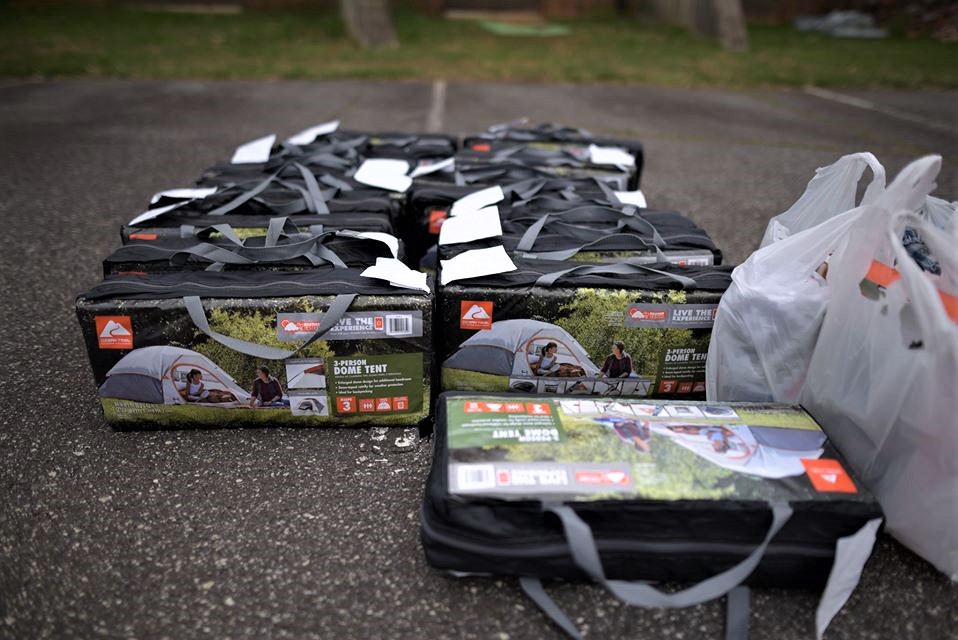 Members of BeLoved Asheville’s street medic team described a postapocalyptic scene when they drove to Pritchard Park downtown on a recent evening during the coronavirus pandemic.

But some people remain outside, often with little or no shelter. As the BeLoved team members pulled up to the park, about a dozen members of the homeless community that the organization helps support surrounded them.

Instead of hugs, co-director Adrienne Sigmon said team members spread tents and bags containing information about the new coronavirus, masks, meals and hand sanitizer 6 feet in front of them for the people to grab off the ground.

“This disease has just taken over everything, and it’s really kind of stripped away the humanity and the feeling of what it is to connect with people,” Sigmon said.

As COVID-19 reshapes lives across North Carolina, the homeless population faces its own challenges. Under Gov. Roy Cooper’s order to stay home, advocates who work with the homeless — many of whom lack access to health care and who may be especially vulnerable to getting sick because of living conditions or other illnesses — say it’s hard to stay at home when you don’t have one.

As public facilities like libraries close and volunteers, including churches, scale back on help, advocates said they have been forced to change how they interact with the homeless.

Amy Cantrell, co-director of BeLoved Asheville, which has advocated for the city to deploy hand-washing stations and portable bathrooms, called social distancing a privilege.

“Honestly, for folks who are homeless or living in poverty, it’s very difficult to be socially distant,” she said.

According to a federal estimate in early 2019, about 9,300 people in North Carolina experience homelessness on any given day. But, statistics don’t tell the full story because they may count only certain points in time and don’t take into account people who may be staying with family members or friends, Yolanda Taylor, a managing attorney with Legal Aid of North Carolina said during a virtual news conference Friday.

Advocates called on Gov. Cooper to guarantee safe and stable housing across the state, launched a Change.org petition and unveiled the social media campaign #NeedAHome2StayAtHome.

On March 20, the 52 women sheltering at the Helen Wright Center in Raleigh had a house meeting.

They could stay, so long as they practiced social distancing when they left for work or fresh air, said Dr. Peter Morris, executive director of Urban Ministries of Wake County, which operates the center.

Some left, including a woman who opted to stay with her boyfriend in an outdoor encampment, and are not allowed back during COVID-19’s duration, Morris said. A total of 34 women remain.

“Those 34 women became a household, a household willing to play by a series of rules, just like the rules, probably, you’re playing at your house,” Morris said.

As shelters refuse new admissions to protect those already there, advocates find themselves balancing the needs of a vulnerable population against a virus and other problems in their lives.

When one of the regulars at Raleigh-based Healing Transitions, a chronically homeless man with addiction issues, approached the organization last week, he was turned away, Executive Director Chris Budnick said.

The man instead hunkered down outside across the street. Healing Transitions, which provides a long-term recovery program, detox assistance and emergency shelter, frequently deals with crowding.

About 21 participants have been tested for COVID-19, Budnick said, and the facility has stopped accepting new admissions. All the tests were negative, including three that were initially reported as positive, Budnick said.

Healing Transitions has moved participants with symptoms to a hotel while those considered high-risk have been moved to a second facility, Budnick said. The organization plans to begin operating a remote detox program Monday.

“By reopening that, we can again allow first responders to have a diversion point,” Budnick said.

“We can be a resource, which is even more important at this time for the emergency departments to be able to get people out of there and get them into other services.”