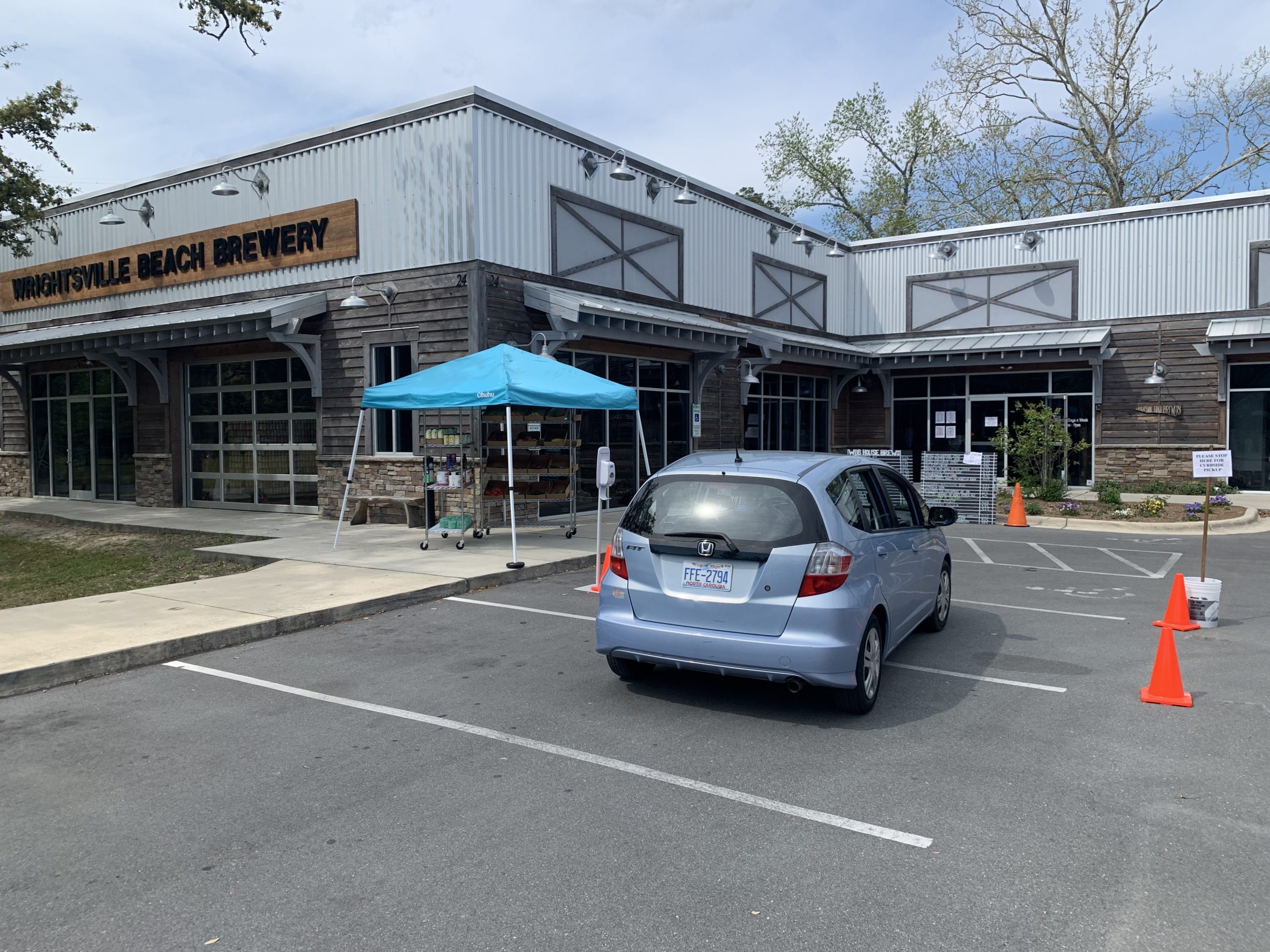 Jud Watkins, owner of Wrightsville Beach Brewery in New Hanover County, has converted his business into a drive-through for beer, groceries and pizza. While many business owners have been confused by how lenders are processing new SBA Paycheck Protection Program applications, Watkins thinks the program may prove counterproductive for the hospitality industry. Photo courtesy of Wrightsville Beach Brewery

The owners of North Carolina’s nearly 900,000 small businesses received conflicting messages over the past week about the SBA Paycheck Protection Program, the new federal program designed to help cover payroll and other expenses during the new coronavirus pandemic.

Approved by Congress as part of a $2.2 trillion relief package, the $349 billion loan fund was first made available April 2.

But some would-be participants soon discovered that they’d been shut out of the program, at least temporarily.

Bankers in North Carolina and regulators in Washington, D.C., now say the initial glitches in the program’s rollout are being addressed, and loan approvals should go more smoothly in the days ahead.

Available through community financial institutions that participate in U.S. Small Business Administration lending, the 1-week-old Paycheck Protection Program allows businesses with fewer than 500 workers to take out loans at 1% interest. Neither the government nor local lender charges any fee during the application process.

The program’s immediate goal is to keep more Americans employed until the threat of COVID-19, the disease caused by the new coronavirus, begins to subside.

The SBA will forgive a loan if of a business’s employees are kept on the payroll for eight weeks and if a loan’s proceeds are used for payroll, rent, mortgage interest or utility payments.

But if a business reduces its full-time headcount or if wages and salaries are cut by more than 25%, the level of loan forgiveness by the government is also reduced.

About 60% of the N.C. Bankers Association’s members are participating in the program, said Wendell Begley, CEO of Buncombe County-based Black Mountain Savings Bank and the association’s board chairman.

“We’ve got to get money back out there in the pipeline to these folks that are being laid off,” Begley said.

“The legislation that approved all this and worked it was so voluminous in size, it’s really been hard for the banks to have been ready to take the plunge and make sure they got the assurances they need and understand the program as it is and get the money in the hands of the folks that need it the worst,” Begley said.

Questions troubling bankers during the program’s first week included the degree to which federal regulators might mitigate any risk in making the loans and the ability to sell some loans, get them off the books and make way for new ones.

Other complicating issues included crashes of the SBA’s E-Tran system used by bankers to authorize loans and the absence of an official agency document used to close the new loans, which some community lenders feared would place them at legal risk.

In the wake of the 2008 market crash, “we’re very, very closely examined,” Begley said of the banking industry. “We’re regulated. We want to make sure we’re credible and we do what’s right.”

By Wednesday, some bankers were feeling somewhat more optimistic that snags in the program were being worked out.

A spokesperson for Truist, the Charlotte-based bank formed from the merger of BB&T and SunTrust, said more than 100,000 businesses had already signed up and that applications were being processed.

Charlotte-based Bank of America initially received criticism from some customers who were locked out of applying.

The bank later explained that it was staggering its applications by working with prior borrowers first and then opening the door to applicants with a business account but without any borrowing history.

Raleigh-based North State Bank also chose to take applications in stages, with small businesses and sole proprietorships able to apply as of April 3 and independent contractors and the self-employed able to do so beginning Friday.

“As we continue to ramp up the program, we’ll share updated information on our website,” its statement noted.

The White House has asked Congress to add another $250 billion to the Paycheck Protection Program, U.S. Treasury Secretary Steven Mnuchin has said.

Back to work, but when?

While employers and employees are anxious to get back to work, not everyone in the hospitality industry believes that encouraging employment through the Paycheck Protection Program is the right approach, at least for now.

Jud Watkins, the owner of Wrightsville Beach Brewery in New Hanover, has cut his workforce by half and supports the mandated closure of bars and restaurants during the pandemic.

Watkins has converted his business into a drive-thru for beer, groceries and pizza with no more than eight to 10 people inside the building at one time.

In a letter delivered this week to U.S. Rep. David Rouzer, Watkins shared that he thought Paycheck Protection Program loans were not designed for most businesses operating in the hospitality industry.

“If full forgiveness of the PPP loan hinges on rehiring to full staffing levels, I would kindly ask that Congress continue to refine the process by adding special provisions for the hospitality industry so that you do not put business owners in the awkward position of asking employees to return to work in a space that has been mandated by the government to be closed,” the brewery owner wrote.

“Asking an employee to do so is counter-intuitive and goes against the advice of every doctor with whom I have spoken. Congress is effectively asking employers to force their staff into unsafe conditions; return to perform work that does not exist; and risking pushing many of those employees right back into unemployment when the PPP funds run out if business volumes haven’t returned to their previous levels.

“If we are allowed to delay when we receive and use the PPP funding based around a logical timeline that coincides with government mandates, more businesses will succeed and stay viable in the long term,” Watkins told his congressman.