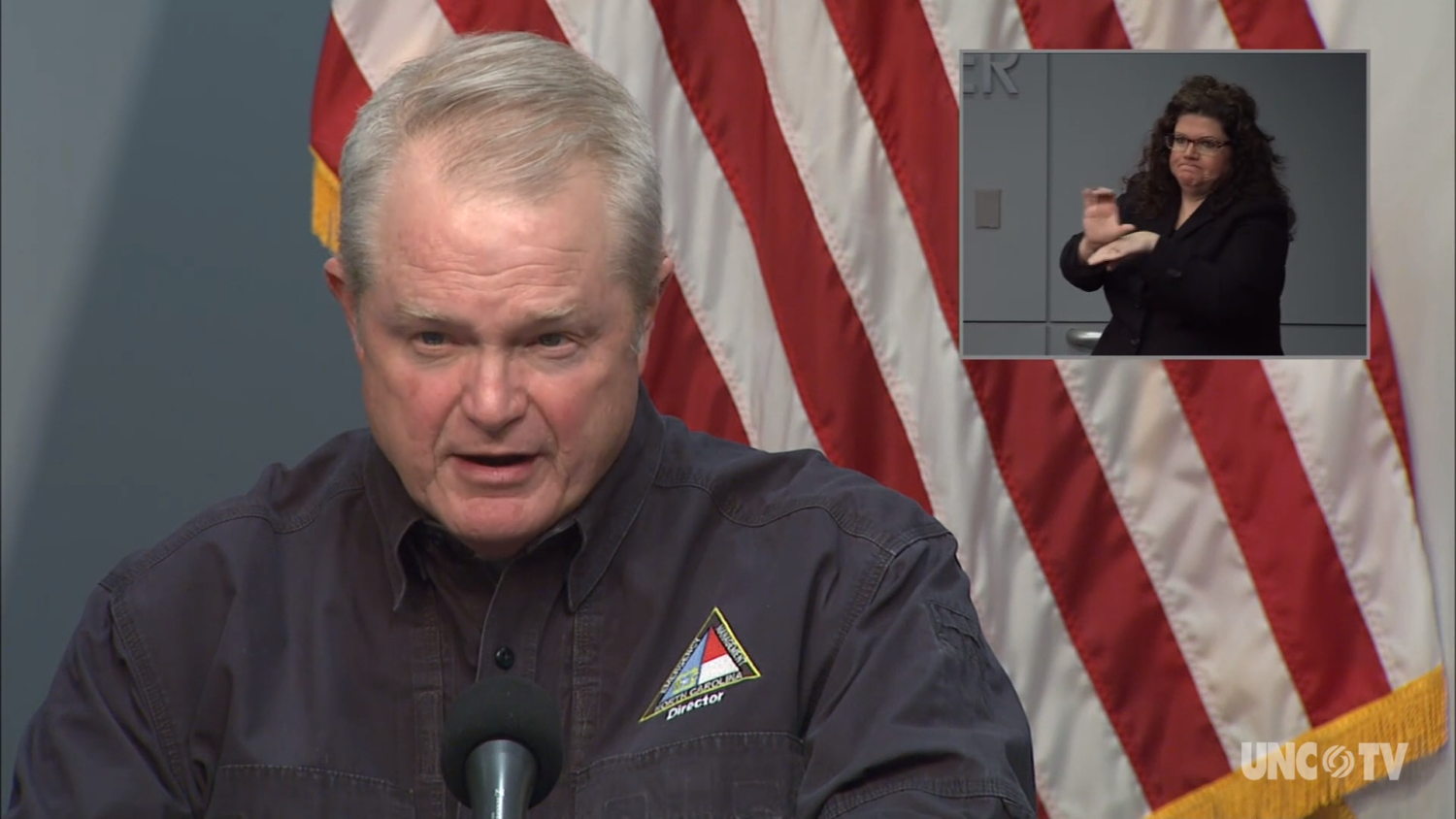 North Carolina has frequent press conferences with state officials pushing out selected information and has posts some coronavirus data online, but lags behind other states in sharing details on testing and responding to public records requests. Here, NC Emergency Management Director Mike Sprayberry speaks at a recent press conference. Screen grab from WUNC-TV

As North Carolina health officials battle the outbreak of the new coronavirus, the state has tightly controlled access to information related to the pandemic, providing some data but refusing to share others, even when requested.

More recently, NCDHHS added a breakdown of additional data to its dashboard. For instance, you can look at a breakdown of the number of confirmed cases across the state by race or ethnicity. But that breakdown doesn’t tell you how many people from each group have been tested overall.

It gives similar breakdowns on age ranges and gender. It is relying on hospitals to report the number of hospital beds, ICU beds and ventilators available and in use. The reporting has been up and down, particularly from small hospitals, DHHS Secretary Dr. Mandy Cohen acknowledged earlier this week.

Many states provide a “data dashboard” similar to the one used in North Carolina, which DHHS updates once a day by about 11 a.m.

But some states are providing much more detailed information. South Carolina, for example, publicly provides reported cases by ZIP code. The state also has projections of needed hospital resources and COVID-19 deaths available.

“We believe that is important information for the people,” South Carolina Gov. Henry McMaster said at a press conference last week. “We want the people to know what we are facing.”

South Carolina state epidemiologist Linda Bell said state health officials use ZIP code data for monitoring or contact tracing. She cautioned, however, that members of the public should not use the ZIP code data as a sign that they can disregard measures put in place by the government.

“If they rely on that information to make decisions about which neighborhood is safe or not, they’re making a mistake,” she said.

North Carolina’s Mecklenburg County does provide cases by ZIP code several times per week. A few other North Carolina counties, including Union and Cabarrus, provide ZIP code information. But populous Triangle counties like Wake, Durham and Orange do not, nor does the state provide the information.

Louisiana, which has been hit particularly hard by the coronavirus, provides much of the same data as North Carolina. The state, though, gives the number of patients with COVID-19 on ventilators and it makes public the underlying health conditions for those who have died.

While North Carolina has started providing a statewide total of outbreaks — that means two or more positive tests — at congregate living facilities, the state and counties have not named the nursing homes or residential care facilities where the outbreaks have occurred.

In other states, including California, Minnesota, Georgia and Iowa, county or state officials have named the care facilities with outbreaks or positive cases. Tennessee is working on releasing the names of the facilities where staff members test positive.

News organizations in North Carolina that have asked for this information have received no response and no indication whether that information will be made available. However, some county health departments have shared this information about facilities in their counties.

Despite the gaps in the state’s reporting, it’s still ahead of plenty of others. The COVID Tracking Project, a collaborative dataset hand-gathered and maintained by a volunteer team of coders, journalists and analysts, gives North Carolina’s COVID-19 data an “A” for consistently reporting positive and negative tests in both commercial and public labs.

In an effort to get a more granular understanding of the cases of COVID-19 across North Carolina, a collaborative of six newsrooms across the state submitted a records request seeking the state’s database of reported cases and other records on March 20.

The request specifically asked for patients’ names to be redacted, as required by federal health privacy law.

Despite that, state Health Director Dr. Elizabeth Tilson said most of the records being sought by the collaborative were not public.

“Most of the records and information you requested, however, contain confidential medical information from patient records that are protected by law as strictly confidential under G.S. 130A-143, with some very limited exceptions,” Tilson said in a letter responding to the request on April 1.

Adam Marshall, an attorney with the Reporters Committee for Freedom of the Press who has been tracking records and access issues across the country during the COVID-19 pandemic, said many state and local governments have cited the federal health care privacy law — known as HIPAA — in withholding documents, but it doesn’t apply.

“Public officials just throwing HIPAA around like it’s a magic wand are not correct,” Marshall said.

Similarly, Raleigh attorney Amanda Martin, with the law firm Stevens, Martin, Vaughn and Tadych, addressed the issue in an email she sent to reporters earlier this week as part of a regular series of updates on the state’s open government laws.

“Remember that release of deidentified information or aggregated data does not violate either HIPAA or state law,” Martin said in her email before pointing to a specific state court opinion that found if federal law allows disclosure of certain information, state law requires it.

In her letter responding to the collaborative’s public records request, Tilson also said releasing most of the records sought would deter people from seeking treatment and providing health information in the future.

“While the public records act does not require and, with limited exception, the law does not allow public disclosure of personal health information collected by health officials, I think it’s important to understand there are public health and safety considerations informing what data and records state and local health officials collect and share,” Tilson said in her letter.

“In order to learn more about a communicable disease, for example, who is at higher risk of complications of an infection and how it spreads, public health officials may need access to a variety of highly personal information related to a person’s medical history, health status, where they‘ve been, what they’ve been doing and with whom they’ve come into contact,” the letter continued.

But Marshall, the RCFP lawyer, said the more data a government releases, the more the public can understand its response to the ongoing health emergency.

“The more data that is released, the better the public is informed and the better the governments are able to figure out what needs to be done,” he said.

Tilson’s response said the agency would release some information but, as of Thursday afternoon, no information had been provided.

An NCDHHS spokeswoman has previously said the agency would produce records in a “reasonable time.”

This week, the collaborative also requested records from the N.C. Office of Emergency Management.

Specifically, the request sought to get records that would show needed resources in communities across the state.

On Thursday, an employee for the N.C. Department of Public Safety — the agency under which OEM is housed — responded and said any production of records in response to the request would likely be delayed.

“Your request is extensive, and we will respond as promptly as possible,” Susan Smith, with DPS, said. “While we fully appreciate and support cooperation and transparency, please be aware that the fulfillment of your request may be delayed due to the unprecedented workload associated with ensuring the health, safety and security of staff members and the public during this time of pandemic.”

Marshall said the pandemic is no reason for government agencies to delay or deny a request.

“I think it makes sense for everyone to be a little bit flexible and try to do the best under the circumstances, but it’s not acceptable for governments to simply say, ‘We’re not going to give you anything, maybe come talk to us when this is all over,’ because there are things happening now that the public needs to know about,” he said.

This story was jointly reported and edited by Kate Martin and Frank Taylor of Carolina Public Press; Gavin Off, Ames Alexander and Doug Miller of The Charlotte Observer; Brian Murphy and Jordan Schrader of the Raleigh News & Observer; Nick Ochsner of WBTV; Emily Featherston of WECT; and Tyler Dukes and Ashley Talley of WRAL.​