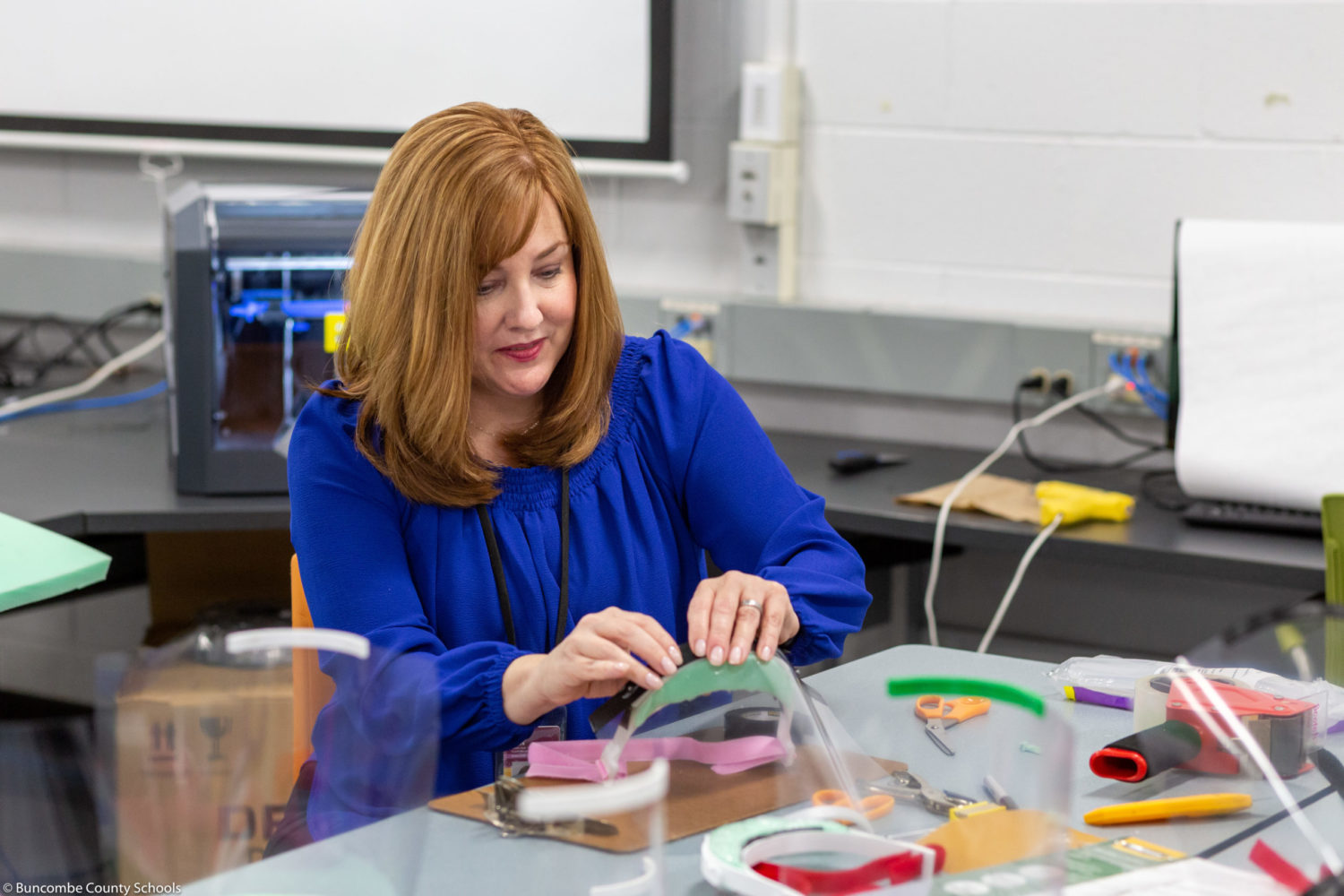 While schools across North Carolina sit empty due to the new coronavirus outbreak, some staff members are using classroom technology to produce face shields for health care workers who are battling COVID-19, the disease caused by the virus.

Buncombe County Schools and Western Carolina University are using their 3D printers to make the much needed protective equipment.

“We did a trial run and ran that by the (emergency management officials) to make sure we had their approval before going into larger production,” said Barry Pace, Buncombe County Schools director of technology.

Buncombe school leaders gathered all of their 3D printers — 50 in total — and brought them to Nesbitt Discovery Academy in Asheville, where staff members have been printing frames for the protective face shields.

The process takes a few hours per shield. Staffers attach sheets of clear plastic material, glue the 3D-printed frames in place, add foam barriers on top of the frames and seal the seams with electrical tape.

“(I) needed to try six different times before the product was ready,” Baldwin said in a story posted on the school system’s website. “It doesn’t get much more ‘real-life’ than that. And I’m not even an engineer. I’m using Autodesk Inventor, the same software our students use. I hope the kids can see the power of technology combined with autonomy and innovative thinking.”

At Western Carolina University, faculty, staff and students in the College of Engineering and Technology have been using 3D printers in the college’s Rapid Center to develop visors for face shields.

Their work is part of a nationwide initiative by Stratasys, manufacturer of several 3D printers used by WCU’s Rapid Center, according to the university. The company has issued a nationwide call to businesses, industries and universities to use their 3D printers to make face shields for the medical community.

“Our maximum capacity is about 120 per week when we run 24/7,” Patrick Gardner, director of WCU’s Rapid Center, said in a statement. “That’s not a huge number compared to Ford, Toyota and some of the other national manufacturers involved in this effort, but each one is a precious commodity.”

WCU is shipping its face shields to Stratasys in quantities of 100 for collection and distribution to hospitals, emergency responders and others on the front lines, according to the school.

In a separate project, emergency services personnel from another county have asked WCU to produce more personal protective equipment for them as well.

“It looks like we may be able to use 3D printers to build custom connectors for their emergency gear, which are in very short supply,” Gardner said. “They are shipping samples to us, and we will evaluate to see how we can help. If we can assist them, we may be able to extend that service to other counties.”

Correction: Laurel Bates appears in the photo accompanying this article. As originally published, a photo of another person appeared with article and incorrectly identified her as Bates.