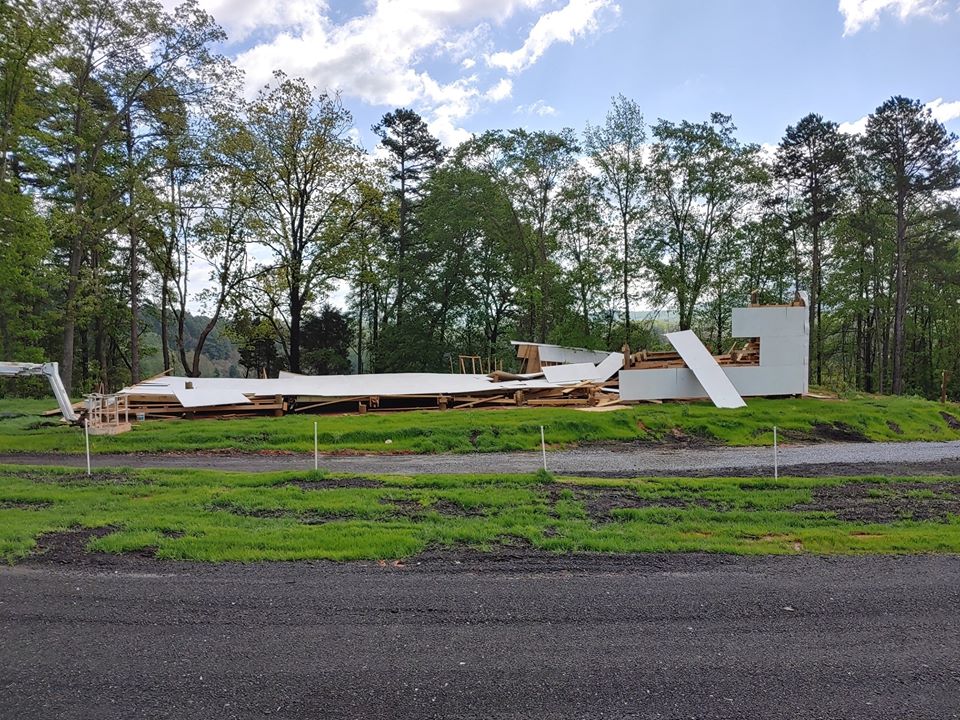 Drive-in theaters, already an endangered species, are seeing their season start disrupted in North Carolina due to coronavirus. Bad weather has now compounded that at one of just four drive-ins left in the state, Hound’s Drive-in Theater in Kings Mountain, where weekend storms destroyed the theater’s new third screen. Photo courtesy of Hound’s Drive-in Theater.

In the aftermath of the violent storms that swept through the Kings Mountain area of Cleveland County early Monday, Preston Brown knew there would be damage, but not this kind of damage.

There on the grounds of Hound’s Drive-in Theater lay a new movie screen in shambles.

“It just snapped it off at its base,” Brown said of the storm that destroyed the 68-foot-tall, 100-foot-wide screen.

With a picture size of 50-by-100 feet, “They are the largest screens that I know of in the nation.”

The storm “blew away a year’s worth of construction to Screen 3, which we had planned to open once the stay-at-home order is lifted,” Brown said, referring to the statewide lockdown designed to slow the spread of COVID-19, the disease caused by the new coronavirus.

For Brown and the other owners of North Carolina’s four surviving drive-ins, the 2020 season has gotten off to a rough start.

Built on the grounds of an abandoned mill, Hound’s Drive-in Theater had been beating the odds before the pandemic and this week’s storm, a rural anachronism in a world of megaplexes and streaming videos.

But operating one of America’s most beloved cultural icons has always been a labor of love.

Some 4,000 outdoor movie theaters lit up the evening sky across the country in the 1950s, according to DriveInMovie.com.

During that largely black-and-white era, television was growing in popularity, but cruising into a drive-in for an Elvis movie, popcorn and togetherness continued to fill lots.

As a new century arrived, DVDs gave way to streaming services like Netflix and Hulu, and an increasing number of families made their own popcorn and crashed on the couch.

But for drive-in operators, it was the costly conversion from film to digital that marked a do-or-die moment.

Brown and his father rose to the challenge when they opened their two-screen drive-in in 2016 after installing a digital projector costing $120,000.

Today, only about 320 drive-ins remain standing across the country.

In North Carolina, just four outdoor theaters in Albemarle, Henderson, Kings Mountain and Shelby were in business when Gov. Roy Cooper imposed his stay-at-home order. How many will be left when it’s over remains to be seen.

Drive-in season usually starts at mid-March, picks up in May and peaks in July before closing down in September or October, according to DriveInMovie.com.

“So this virus is hitting right when the drive-in season would begin, and if it lasts until midsummer, as many are now projecting, it will run through what is our drive-ins’ most important time of the year,” a posting by site manager Nick Hensgen says.

“Many are run at near-break-even simply because the owners love them and the service they provide to their local communities.”

If owners miss their entire season, “we predict that many will never open again and we will see a very large number of drive-ins go dark permanently,” the site says.

In addition to the impact of the stay-at-home order, separate county and state orders mandating the closing of nonessential businesses took effect.

“We were told that we had to shut down,” Brown said.

The plea worked, and Hound’s Drive-in Theater and the other three remaining drive-ins around the state were exempted from the shutdown.

But the reprieve was short-lived.

The stay-at-home order kept customers off the roads and, fearing liability, Hollywood withdrew the rights to have its movies run during the lockdown.

Soon after, Hound’s became a temporary place of worship, with several local churches joining hands to have their congregations meet on Brown’s lot and hear pastors address the assembly.

“We hauled in some large farm trailers” as speakers’ platforms, Brown told Carolina Public Press, and music was broadcast through the drive-in’s sound system to about 200 cars.

If all goes well and the state’s stay-at-home order is lifted on April 29, Hound’s will reopen, Brown said. While movies like the new “Fast and Furious” title won’t be distributed to theaters until COVID-19 is declared under control, other older titles will be offered for viewing on his two original screens.

Down the road in Shelby, Sunset Drive-in Theater remains closed.

“It is really all unknown at this time,” said Donald Stinnett, a spokesman for the three-generation, family-run theater that opened in 1984.

Indoor cinemas are also reeling from the effects of the coronavirus, and for some of them, time has simply run out.

Over the past three weeks, the owners of Cinemark theaters in Buncombe, Guilford, Mecklenburg, Randolph, Rowan and Wake counties have informed the N.C. Department of Commerce that they are closing permanently.

Like the state’s four drive-ins, Cinemark had competed with other big-box theaters and had to deal with the coronavirus and the streaming trend. A total of 271 employees are affected by Cinemark’s in-state layoffs.

Down but not out at Hound’s Drive-in

Back at Kings Mountain, Brown said Screen 3 needs major repairs and won’t be up and running for at least another year.

Of the more than 200 rental properties that the Brown family owns, only nine sustained major damage during the weekend storm.

“I am fortunate that the drive-in isn’t my main source of income like others,” Brown told Carolina Public Press. “I will, 100 percent, open back up.”