The North Carolina General Assembly normally meets in the State Legislative Building in Raleigh, seen here in Feb. 2018, but has been meeting by teleconference in committees as legislators prepare to tackle COVID-19 response legislation. The reliance on the internet for communications during the health crisis has brought greater urgency to the issue of uneven access to high-speed broadband across the state. Frank Taylor / Carolina Public Press

Specially outfitted Wi-Fi school buses, thousands of laptops and tablets equipped with hot spots and putting broadband systems at idle schools to use are just some of the ideas of how to bridge North Carolina’s digital divide in the midst of a long-term shutdown.

While state policymakers grapple with a deeper response to the COVID-19 pandemic, glaring differences in broadband service and access have put more focus on the state’s long-running policy debate over whether broadband is essential infrastructure and the proper role of the public sector in its provision.

In an update Tuesday for the N.C. House Select Committee on COVID-19 Economic Support Workgroup, Jeff Sural, director of the state’s Broadband Infrastructure Office, outlined a series of short- and long-term responses needed to get more service to North Carolina households at a time of swift conversion to online necessities.

For Sural and legislators who have advocated for expanding broadband programs, the lockdown and the quick transition to virtual classrooms, telemedicine and Zoom meetings have underscored disparities between the broadband haves and have-nots.

The current situation, Sural said, “really highlights where the unserved areas are and the challenges they’re facing.”

Last month, as part of its COVID-19 response, the N.C. Broadband Infrastructure Office launched an interactive map showing locations for free public Wi-Fi locations along with free and low-cost provider programs. The official definition of broadband is 25 megabytes per second download and 3 Mbps upload.

Going forward, Sural said, the state will have to get creative to fill in the gaps.

He said the N.C. Department of Information Technology will ask for a one-time boost of $135 million for the state’s Growing Rural Economies with Access to Technology, or GREAT, program, which provides infrastructure grants for underserved areas along with greater flexibility to get more funds out faster.

The broadband office estimates that as many as 261,000 households in the state don’t have any access to broadband and 1.6 million households either can’t sign up for service or can’t afford it.

A recent study conducted by the office estimates that 197,139 households are caught in the homework gap in which students can’t do required online work from home.

Next month, through a collaboration involving AT&T, the Department of Public Instruction and a handful of school districts, the state will roll out 100 school buses equipped with wireless transmitters with a range of about half a mile each to be stationed in areas with low access.

Other proposed projects include using school Wi-Fi to bolster local service near the schools and raising public and private funds for tablets and other devices equipped with cellular hot spots for hard-to-reach areas.

Sural, who testified before Congress in early February about North Carolina’s efforts to improve broadband reach, said his office has been trying to zero in on places that need access to resources the fastest.

That’s not always easy, he said, because the data reported on broadband, which is done by census tract, is often far different from the reality on the ground. Under Federal Communications Commission rules, if one household in a tract can receive service, the entire tract is listed as served.

The broadband office has developed its own set of maps using a range of inputs and criteria. The maps point to where the gaps are and where to start to fill them in, Sural said. 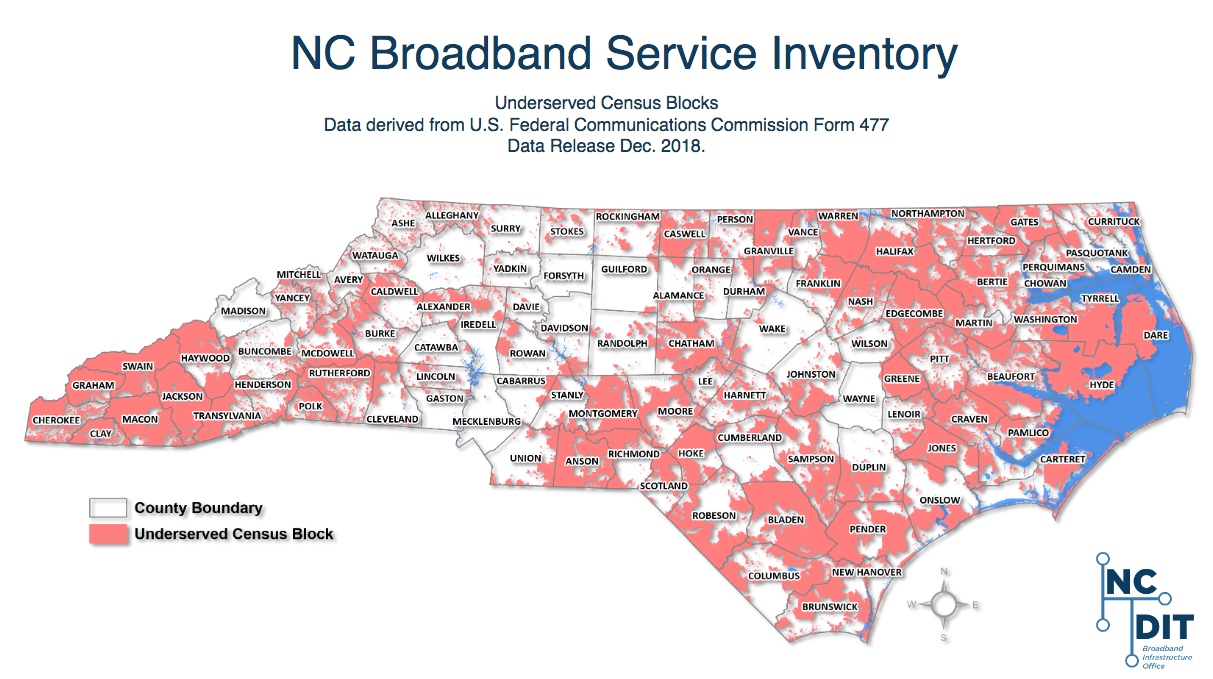 A map based on Federal Communications Commission data shows substantial underserved areas for high-speed internet access across many rural areas of North Carolina. But state officials believe the FCC’s rules actually mask how pervasive the problem is across the state. Image courtesy of the NC Department of Information Technology

Committee member Rep. John Szoka, R-Cumberland, who has sponsored legislation to increase broadband options, said the sudden need for more access due to the pandemic should help settle the argument over the need to put more public resources into broadband efforts.

“In the past several sessions, we’ve had discussions on some of these potential solutions, and the discussions always come down to ‘Is broadband connectivity a service, or is it infrastructure?’” Szoka said.

Students being told to stay home and connect via the internet, he said, further strengthens the argument that high-speed broadband is infrastructure and not an optional service.

Although recently the state increased spending on broadband through the GREAT program and loosened some rules allowing participation by electric cooperatives, broadband advocates are still waiting for a key change in state law that effectively prevents direct public investment in broadband infrastructure by local governments.

Large-scale cable and telecom providers have fought attempts to overturn the law since it was put in place in 2011.

Last year, an attempt to hammer out a compromise in a bill dubbed the NC FIBER ACT failed in large part over how the degree of service and access would be measured and over resistance by some lawmakers to what they see as government competition with private enterprise.

Szoka, one of the act’s sponsors, said Tuesday that in the short session and going forward, the legislature should continue to work with large and small private internet service providers to build out service, but government has to get more involved.

“I think there is really a role for government,” he said. “I think this crisis has really shown that in spades.”

Sural’s presentation to the House Select Committee on COVID-19 can be found on the General Assembly’s website.