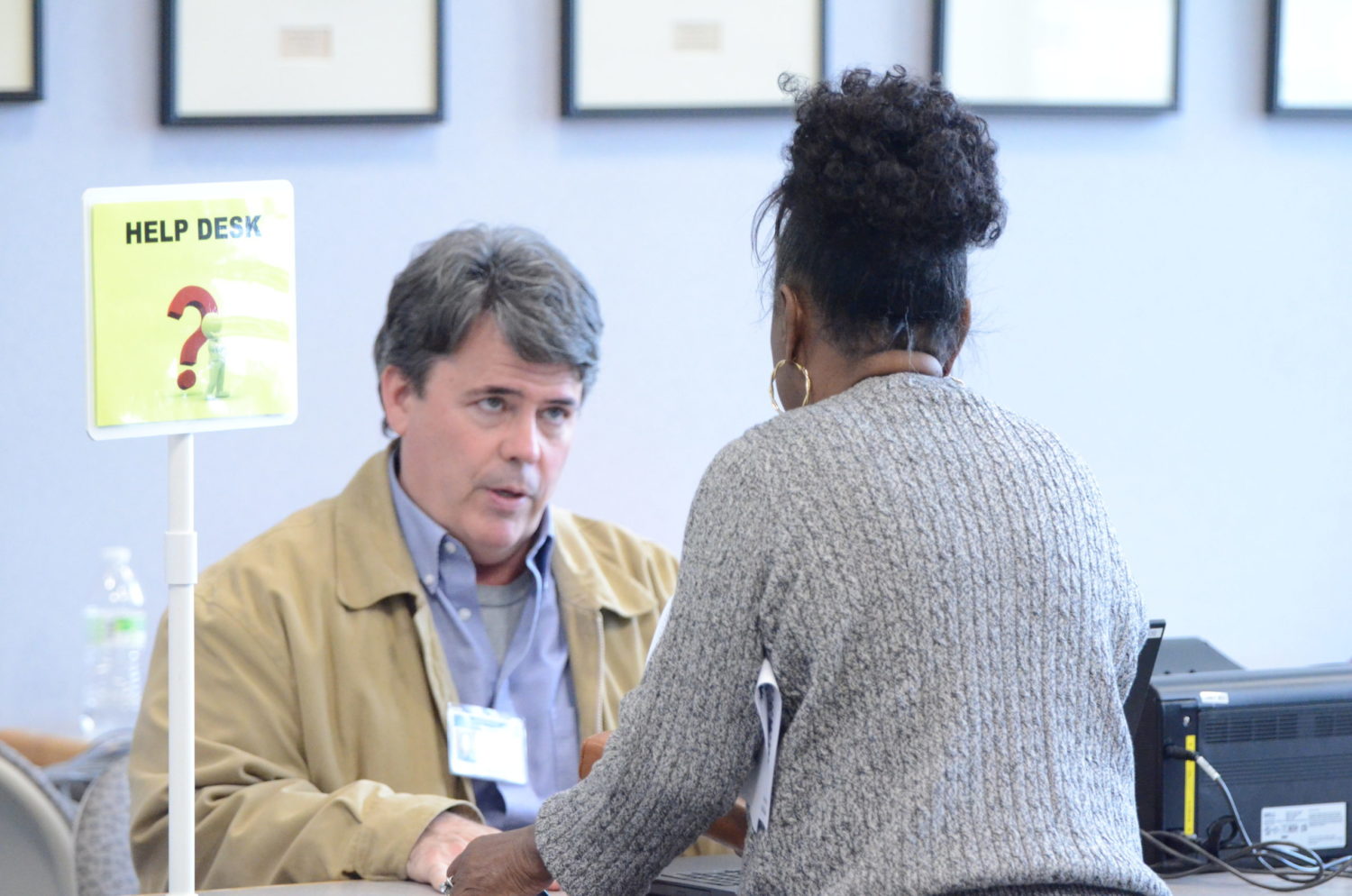 The first coronavirus response legislation that the N.C. General Assembly passed functions like a tourniquet — it aimed to stop the immediate economic hemorrhage from the pandemic and shore up health care across the state.

But with legislators set to return to Raleigh on May 18, budgetary patients will still be in the waiting room needing attention. For North Carolina’s state and county elections agencies, and the voters relying on them to run a safe, fair and secure election, the clock is ticking.

Executive Director Karen Brinson Bell has sent three letters to the legislature asking for changes to state voting laws and roughly $2 million in funding to match federal money made available by the CARES Act.

Brinson Bell said the $11 million in federal money is needed to help counties pay for what elections officials expect will be a dramatic increase in absentee-by-mail voting and equipment to run in-person voting safely.

As it will for the upcoming second primary in western North Carolina’s 11th Congressional District and a new primary for a county commission seat in Columbus County, Brinson Bell said the state plans to purchase masks for every poll worker as well as every voter. They will also buy enough pens that each voter gets his or her own, plexiglass shields for check-in stations and heavy-duty sanitizing kits for every polling place.

“We are a logistics operation. We plan, we prepare for the worst and hope for the best in everything that we do,” she said, “and that’s what we’re doing this go round as well.”

Despite the urgent need for funding — the 2020 general election is less than six months away — North Carolina lawmakers have yet to substantively address the requests.

“We hope that they will address this in a timely fashion,” Brinson Bell said. “By June 15, we’re going to be in a very tight spot to be able to have the supplies and the materials.”

As the state elections board continues discussions with lawmakers, county elections officials are the ones left looking over budgets to see if they can afford to pay for changes in this year’s election in reaction to the pandemic.

“Right now, we don’t have anything to measure it by, because we’ve never had something like this,” said Glenda Clendenin, Moore County elections director.

She plans to order 70% more ballots for the 2020 general election than in past years and hopes that will account for any increased demand for mail-in voting — and for a projected bump in the number of voters who order an absentee ballot by mail, then later decide to vote in person instead.

But she said there’s no way to know for certain.

Reporters from six newsrooms across the state collaborated to contact all 100 county boards to get a better idea of the scale of the financial and logistical burden of conducting a large general election in the shadow of a global pandemic.

Not all counties responded to the requests by publication time, and there were varying degrees of specificity among those who did provide data.

Even without data from every county, early numbers show that running an election with COVID-19 in the background will be a complicated and expensive endeavor.

A shift in turnout

Historically, North Carolina has very low absentee-by-mail turnout, which Brinson Bell attributes mostly to the practice of one-stop or early voting, the weeks of in-person voting ahead of Election Day, when voters can register to vote and cast a ballot in the same stop.

In 2016, only about 4% of ballots cast in the presidential election were absentee-by-mail.

This November, the state expects 10 times that amount of ballots cast by mail.

“We’re anticipating that of our voter turnout in November that about 40% of those ballots would be cast by mail during that election,” Brinson Bell said.

Brinson Bell said that figure is based on what she and others at her agency have gathered from other states that have conducted primaries amid COVID-19, with a particular focus on Wisconsin.

But even with other elections to use as a model, the estimate of expected absentee ballot requests is far from certain.

Patrick Gannon, a spokesman for the state board of elections, clarified the number is a “best guess, based on the assumption that there will still be apprehension by some voters to show up at polls in person in November.”

That large of a shift would cause a dramatic increase in cost just for materials, printing and postage — not to mention the cost of the machines and personnel to process that many ballots. Reporters found that for some counties, such an increase could burden budgets at a time when the loss of tax revenue from the virus is already causing concern.

“I was a county director for many years, and I grew up in a rural county that is facing economic hardships, so I know firsthand what they’re dealing with,” Brinson Bell said. “And this is going to hit all across our state, all 100 counties.”

Absentee-by-mail voting in North Carolina requires a lot of paper, ink and postage, because every absentee ballot is made up of multiple parts, each with its own cost.

Each ballot packet includes the outgoing envelope and label, the ballot, an instruction sheet and a return envelope.

Sometimes, county election boards must send duplicate ballots if a voter doesn’t receive a ballot or ends up needing a new one because he or she improperly marked the original.

Reporters found costs are not uniform across the state — counties spend $1.45 to $2.85 per absentee ballot package, with many reporting that the prices change depending on the volume of ballots.

Regardless of the per-unit price, Brinson Bell said the NCSBE estimates a 40% turnout by mail would cost $2 million or more statewide. Without federal and state funding to offset those costs, North Carolina’s 100 counties will have to bear it alone.

Take Madison County, for example, which based on previous costs per voter is expecting to spend $2.65 per absentee ballot mailed.

Based on the state board’s projections, Madison would receive around 4,500 requests for absentee ballots, and another 1,200 duplicate requests.

If the county were required to pay for the return postage on the ballots, as some elections officials and advocates for expanded voting are lobbying for — both to the General Assembly and within the court system — the additional 55 cents per ballot would increase the total cost to more than $18,000.

Based on those numbers, the most expensive projection is equivalent to 7% of the county Board of Elections’ 2016-2017 annual expenses. That figure doesn’t include the cost of personnel to handle, monitor and verify the ballots or the machines to tabulate them.

Some county directors think they will be able to shift budgets around to absorb the cost of additional by-mail ballots.

Rachel Raper from Orange County said she thinks they could manage by hiring fewer staff to work early voting sites and precincts, as there would be fewer in-person voters.

However, such a decision would have to be made at the last minute, and in-person voting will also require additional expenses this year, as counties look to provide personal protective equipment for staff.

Brinson Bell said preparations have to be made now for all possible outcomes, even though it’s unclear how much the virus will affect daily life come November.

In the end, no matter what the increased cost turns out to be, state law requires local election boards to provide an absentee ballot to any eligible voter who requests one. North Carolina does not require an excuse to vote by mail, meaning any and all voters are eligible.

Nearly every county surveyed relied entirely on county funds to pay for elections in 2016 and 2018, according to elections directors who responded.

Many of those directors reported having already submitted their budget requests for fiscal year 2021 — without factoring in the increases in costs now materializing thanks to COVID-19.

“They have day-to-day operations that they have to fund and budget and prepare for and when something of this nature comes along that’s totally outside of the budgets that they’ve prepared for,” Brinson Bell said.

Some directors, including Clendenin in Moore County, said their county leaders have already expressed support.

“My county has said ‘whatever you need, we’re going to pay for it,’” she said.

But funding from an outside source such as the federal government would help bridge those gaps, Brinson Bell said.

Along with Brinson Bell, local elections directors are hoping state legislators will see the need to provide the necessary matching funds to ensure North Carolina can take advantage of federal coronavirus relief.

“Certainly the federal funding would be a huge boost to all counties trying to conduct this critical election,” Durham County Elections Director Derek Bowens said.

“We would love to know that those funds will be available so that we have assurances that the state will be covering many of those things that we need, which will obviously alleviate the burden on counties to purchase unplanned things,” he said.

Lawmakers say they will address the need for additional election funding and other requests from election leaders when they reconvene next week.

“We recognize that running an election during a pandemic is challenging, and changes to existing policies may be necessary to meet those challenges,” said N.C. Sen. Ralph Hise, R-Mitchell, who chairs the Senate Redistricting and Elections Committee.

Hise said elections issues will be addressed when the General Assembly resumes its short session next week, but he did not provide any specific timeline. Hise did acknowledge the state’s need to expand voting accessibility and maintain ballot security.

“Unfortunately, North Carolina had to redo a Congressional election just 18 months ago because of absentee ballot fraud, so striking the appropriate balance with election security will of course be at the forefront of this work,” Hise said.

Even so, there is a time limit.

According to Brinson Bell, planning and purchasing for materials and other items for Nov. 3 is already underway, and needs to near completion by this time next month.

Further complicating matters, the need to prepare for the election is happening at a time when supply chains across the country are overburdened, Brison Bell said.

“We have manufacturing demands that with the global economy that affects our country, that affects the ability that we have to get some of these supplies and, and equipment that we’ll need, and so that’s why we keep putting out that call.”

This story was jointly reported and edited by Jordan Wilkie and Frank Taylor of Carolina Public Press; Gavin Off and Ames Alexander of The Charlotte Observer; Lucille Sherman and Jordan Schrader of The News & Observer; Nick Ochsner of WBTV; Emily Featherston of WECT; and Tyler Dukes of WRAL.