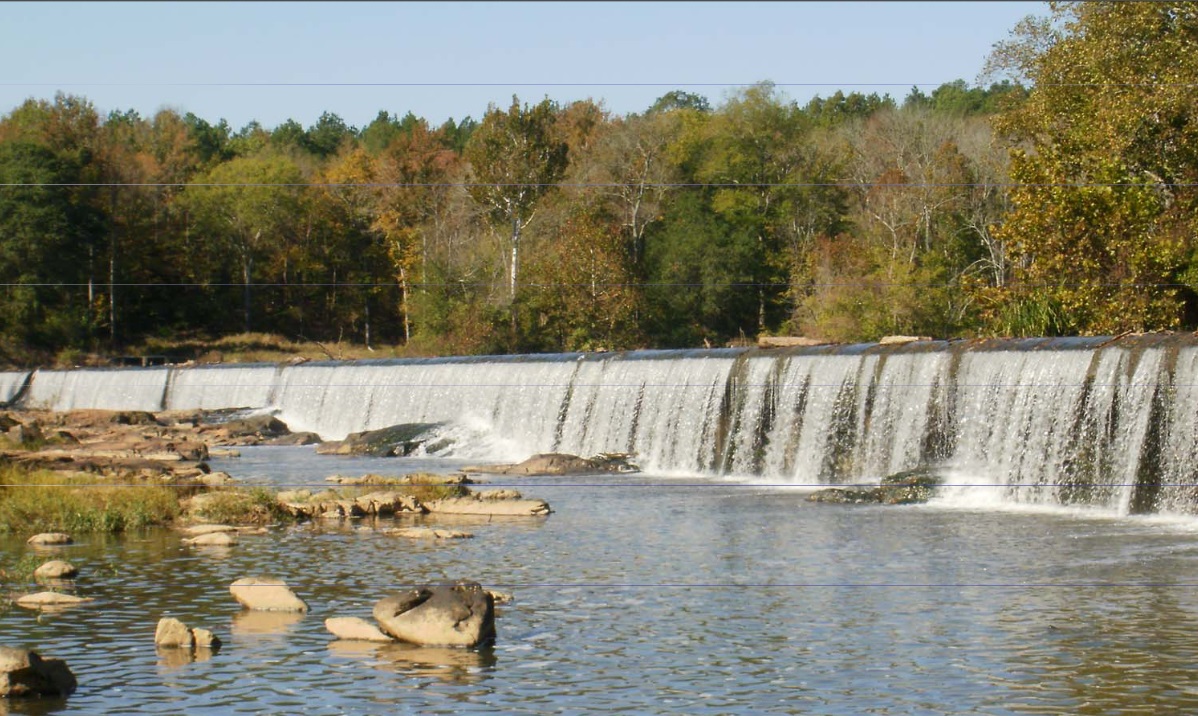 The Haw River crosses over a spillway near Pittsboro in Chatham County. Initial findings indicate high levels of industrial pollutant chemicals in the river here. Photo courtesy of the town of Pittsboro

RALEIGH – N.C. Rep. Pricey Harrison, D-Guilford, and about three dozen co-sponsors have introduced a series of bills intended to demonstrate the range of steps the state could take in regulating a group of chemicals, per- and polyfluoroalkyl substances, or PFAS.

Harrison acknowledged Tuesday that none are likely to pass in their current form, but she was disappointed that after years of work, the legislature has been unable to move on further PFAS regulation.

“It’s frustrating to know that our citizens are getting poisoned all across the state,” she said. “Known carcinogens, known neurotoxicants, and we don’t do anything about it. It’s extraordinarily frustrating to me.”

Last year, Harrison worked with industry representatives to try and find some middle ground on the chemicals, but an attempt to regulate firefighting foam containing PFAS stalled over industry objections.

Further PFAS studies and additional PFAS funding for the state Department of Environmental Quality got tangled up in the battle of over the state budget and never emerged in any of the mini-budgets approved during the impasse.

Now, funds will be even tighter, Harrison said, adding that big policy moves aren’t likely, considering the need to focus on the state’s COVID-19 response.

But by putting the options and strategies out in bill form, Harrison said she hoped to lay the groundwork for when the legislature does start working on a strategy.

Grady McCallie, policy director for the N.C. Conservation Network, said the three bills offer a “comprehensive statement” of the complexity of setting up a regulatory system for PFAS.

“This suite of bills basically says, ‘This is a complicated problem, and we have to push it in several different directions,’ ” McCallie said. “It’s not just one strategy.”

It also broadens the discussion beyond reaction to the GenX contamination in the lower Cape Fear River.

What’s lacking, he said, is the recognition that there are many more PFAS substances and sources to deal with.

“What North Carolina has not done yet is deal with the broader problem of other dischargers upstream who are putting in a variety of contaminating chemicals that are also toxic,” he said.

What the bills do about chemicals

House Bill 1109 is essentially an outright comprehensive ban on the manufacture and use of PFAS in the state. It would ban the manufacture of PFAS compounds or the production of any product using them, except as authorized under federal law. Violations could result in civil penalties.

Harrison said she didn’t expect it to become law, but she wanted to put the industry on notice that there needs to be an active hunt for alternatives to PFAS.

House Bill 1108, PFAS Containment Mitigation Measures, requires the state’s Environmental Management Commission to begin to set standards for PFAS compounds and DEQ to develop a framework for regulation and enforcement of PFAS in discharges, runoff from biosolids and landfill leachate.

Harrison said the bill underlines DEQ’s authority to regulate the discharge of PFAS under the Clean Water Act and requires industrial customers of wastewater treatment permit holders to disclose their presence and remove them from the waste stream. It would hold the permit holders, often municipal- or county-owned sewage treatment operators, ultimately liable for PFAS discharges into state waters.

The argument that the state already has the authority under federal law mirrors a filing last year by the Southern Environmental Law Center that the Haw River Assembly intends to sue Burlington for Clean Water Act violations over PFAS and other industrial waste discharges into the Haw River from the city’s wastewater treatment plants and biosolids application sites.

City officials said earlier this year they were working with industrial customers to identify and eliminate sources.

The third bill in the trilogy, House Bill 1110, would allocate about $600,000 for a series of studies, including ecological assessments of the Cape Fear River Basin and financial and budget impacts of PFAS across state government. It also requires DEQ to create an inventory of all ongoing direct and indirect PFAS discharges and emissions in the state.

Harrison said continuing research is vital, and she wants to see the legislature’s Environmental Review Commission take up the work started by the House Select Committee on River Quality, which was set up in 2017 after revelations about GenX contamination of the Cape Fear River.

This year’s debate, she said, will hopefully lay the groundwork for further PFAS regulation next year. It’s important to remember, she said, that concerns about the health risks of their presence in the environment go beyond what’s in the Cape Fear River.

“The health risks are significant, and if it weren’t for this pandemic, I would say they’re the biggest public health risk facing our state.”

Under another new bill, New Hanover County Schools would get state funding to install reverse osmosis water filters in schools that use water drawn from the Cape Fear River.

Sen. Harper Peterson, D-New Hanover, filed Senate Bill 749 on Monday. The bill would move $600,000 in unspent Department of Public Instruction funds from this year to New Hanover County Schools for reverse osmosis water filtration systems. The bill would allow the school system to decide how many would go in each school, but it would limit the total number the state will pay for in any one school to 10.

The New Hanover County school system is working on a plan to install at least one filtration system per school, and a pilot project is underway in Brunswick County to tests systems for schools there.

Editor’s Note: This article is a co-publication of Carolina Public Press and Coastal Review Online.