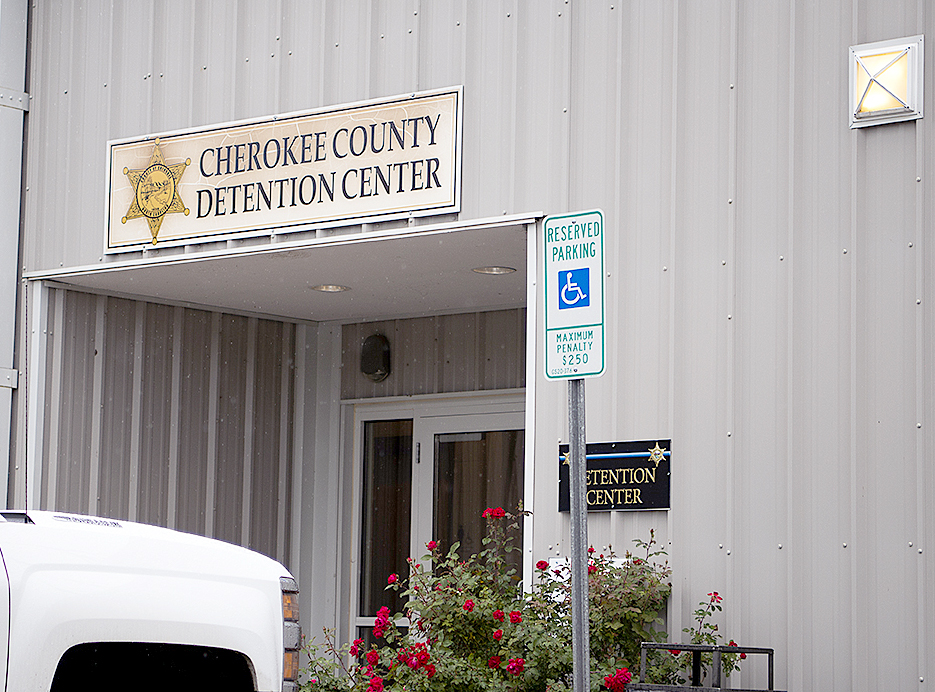 The Cherokee County Detention Center in Murphy, where two guards were fired after a May 2 altercation with an inmate. Maddy Jones / Carolina Public Press

Two guards who lost their jobs after an altercation with an inmate at the Cherokee County Detention Center have raised doubts about the handling of their case, even as the State Bureau of Investigation examines whether they should also face criminal charges.

According to SBI spokesperson Patty McQuillan, the agency is conducting an ongoing investigation into “the alleged assault of inmate George Victor Stokes by Cherokee County Detention Sgt. Joshua Gunter and Detention Officer Wesley ‘Gage’ Killian” on May 2 at the Cherokee County Detention Center. McQuillan indicated that the Sheriff’s Office and District Attorney’s Office requested the SBI’s involvement on May 14. Stokes is apparently not under investigation for his role in the incident.

Gunter told Carolina Public Press that he doesn’t think he did anything wrong in handling an unruly inmate, though he was more critical of Killian’s conduct.

Killian declined to be interviewed, but his lawyer, Zeyland McKinney, said a jail security video of the incident with the inmate would show that his client did nothing wrong. However, state law prevents the Cherokee County Sheriff’s Office from releasing the video footage without a court order.

Sheriff Derrick Palmer said last week that his ability to comment on the situation is limited while the SBI does its job but insisted that he handled the case appropriately.

“These matters involve personnel issues as well as a criminal investigation,” Palmer said. “The only additional comment I would like to make is that when this was brought to my attention, it was handled swiftly and sternly.”

Palmer said he and the District Attorney’s Office asked the SBI to investigate “so that there would not be any conflict of interest with my office if any criminal decisions are to be made.”

More generally, the sheriff expressed a low tolerance for the type of behavior of which the guards are accused.

“I will not tolerate or condone any misconduct involving any of my staff with the public in any way,” Palmer said. “That includes inmates at the detention center. We strive to be professional and treat everyone with respect. Nothing less will be accepted.”

The inmate and the guards

Stokes is serving concurrent state and federal sentences, according to the U.S. Attorney’s Office and state court records. He is in the custody of the U.S. Marshals Service, which had arranged for him to serve time in Cherokee County while awaiting transport to federal prison.

Stokes has been in prison since his 2012 conviction on Hoke County charges for assault with a deadly weapon with intent to kill, robbery, kidnapping, possession of a firearm by a felon and being a habitual felon. North Carolina courts sentenced him to 30 years in prison in that case.

After pleading guilty to threatening a federal judge in April 2016, he received a federal sentence of more than four years. In January 2018, he pleaded guilty to sending a threatening letter to another federal judge and prosecutor “for prosecuting and sentencing (his) brother,” according to court records. Stokes is awaiting sentencing on that new conviction.

Stokes has repeatedly accused prisons of mistreating him. He has filed several civil actions against various prison officials that have been dismissed as frivolous. He has an ongoing civil rights lawsuit against detention officers in Charlotte who, he alleges, violated his First Amendment rights while he was incarcerated there.

Stokes also has a history of threatening, harassing and assaulting law enforcement officers, according to North Carolina Department of Public Safety records. From 2013-16, officials at various prisons cited him for 10 infractions for threatening detention staff or assault.

According to Gunter, it was that kind of behavior that prompted a confrontation with Cherokee County officers on May 2.

The Sheriff’s Office has not released a full narrative of what took place or which former officer is accused of what action. After receiving a request this week for specific information that should be available under the North Carolina Public Records Law, the sheriff released a press release on Thursday that addressed some issues but continued to leave some questions unanswered, especially regarding details of the incident on May 2.

Thursday’s press release described an “assault” on Stokes involving Gunter and Killian, without giving additional details of the circumstances or of the actions of each guard. Gunter, however, provided CPP with his own detailed account of those events.

Stokes was upset about not having access to a television remote, Gunter said, and was threatening violence against officers unless they provided him with a remote.

Gunter and Killian went to the second-story area of the jail, where Stokes was located, to confront him about the threats. Gunter said Stokes threatened to throw both officers over the second-story handrail and made a move toward the officers.

Gunter said he fired his stun gun, but one of the prongs missed Stokes, who then physically struggled with the officers. According to Gunter, Stokes eventually placed handcuffs on himself, after which Gunter led Stokes down the stairs.

When Stokes began to struggle again, Gunter said, he clubbed the inmate in the face with his stun gun, knocking Stokes to the ground.

According to Gunter, Killian was standing several feet away and then ran up “out of nowhere” and kicked Stokes “as hard as he could” in the head.

Gunter said he has viewed the surveillance footage of the incident, which he said showed himself hitting Stokes, then Killian coming in from off-screen and kicking Stokes while he was on the ground and handcuffed.

How the case was handled

According to Gunter, he contacted his supervisor at the jail immediately after the altercation with Stokes. While the jail suspended Killian the next morning, Gunter said, their superiors told Gunter that they believed Gunter’s actions were justified.

Gunter said he thinks the force he used against Stokes was necessary to control him, but Killian’s actions were not.

As Gunter was preparing to go to work on May 11, he received a call from his lieutenant saying he had been suspended with pay pending an internal investigation. Twenty minutes later, his phone rang again, and he was notified that the sheriff had decided to fire him.

Personnel records indicate both men were terminated effective May 11. According to Cherokee County Attorney Darryl Brown, the decision to fire the officers came as a result of the completed internal investigation.

The sheriff issued termination letters to Gunter and Killian dated May 16. “The reason for your termination was violation of departmental policy and procedures regarding the treatment of inmates in the Cherokee County Detention Center on or about May 2, 2018,” Palmer wrote in each letter.

In his Thursday press release, Palmer clarified the cause for the firings. “The unlawful assault of an inmate is a violation of Cherokee County Detention Center Policy and Procedure,” the statement said.

Gunter defended his actions and questioned his termination as the result of what he thought was a rushed investigation. He believes Palmer only showed interest in the case when TV stations in neighboring Tennessee began asking questions. His suspension and termination followed swiftly.

Although Sheriff Palmer notified the Marshals Service that Stokes had been involved in an incident, Marshals Service spokesperson Bob Spangler told CPP on Thursday that this communication took place by telephone on May 4, though the federal agency did not receive an incident report until May 9.

The sheriff said the SBI has his full cooperation. “All evidence gained, including detention center video surveillance, interviews, statements and reports obtained in the internal investigation conducted by the Cherokee County Sheriff’s Office was turned over to the (SBI) as part of their ongoing criminal investigation,” the sheriff’s press release said.

Gunter said Thursday that neither the SBI nor the sheriff’s office investigators have ever interviewed him about the incident. He said he attempted to submit an employee grievance, which department policy requires to go directly to the sheriff, but Palmer refused to talk with him.

Gunter said he has sought legal counsel about the situation but did not indicate whether he plans to file suit.

CPP advised the sheriff this week that Gunter has offered descriptions of the incident and subsequent events that raised questions about the case. Although offered an opportunity to respond, Palmer did not do so, other than issuing the press release.

The Sheriff’s Office isn’t the only public agency in Cherokee County headed by a Palmer that is under state scrutiny.

The Cherokee County Department of Social Services, led by Cindy Palmer, the sheriff’s wife, is under North Carolina Department of Health and Human Services control following an Associated Press investigation that exposed questionable practices in the department’s child welfare section.

The AP reported that Cherokee County DSS illegally removed hundreds of children from their homes under the guise of a “custody and visitation agreement” that bypassed the court system. A judge must sign off on children being removed from their homes, under state law.

Former Cherokee County Attorney Scott Lindsay was fired from his post when that practice became public knowledge, and Cindy Palmer was suspended from her position.

Regional media have previously reported that the SBI is also investigating Cherokee County DSS and that the department is the target of a class-action lawsuit over the removal of children from their homes using custody and visitation agreements.

Sheriff Palmer is seeking re-election this year and won the Cherokee County Republican primary on May 8 with more than 70 percent of the vote. He currently faces no opposition in November’s general election.

Unlike many others, we aren’t owned by umbrella organizations or corporations. And we haven’t put up a paywall – we believe that fact-based, context-rich watchdog journalism is a vital public service. But we need to ask for your help. Carolina Public Press’s in-depth, investigative journalism takes a lot of money, dedication and hard work to produce. We are here because we believe in and are dedicated to the future of North Carolina.