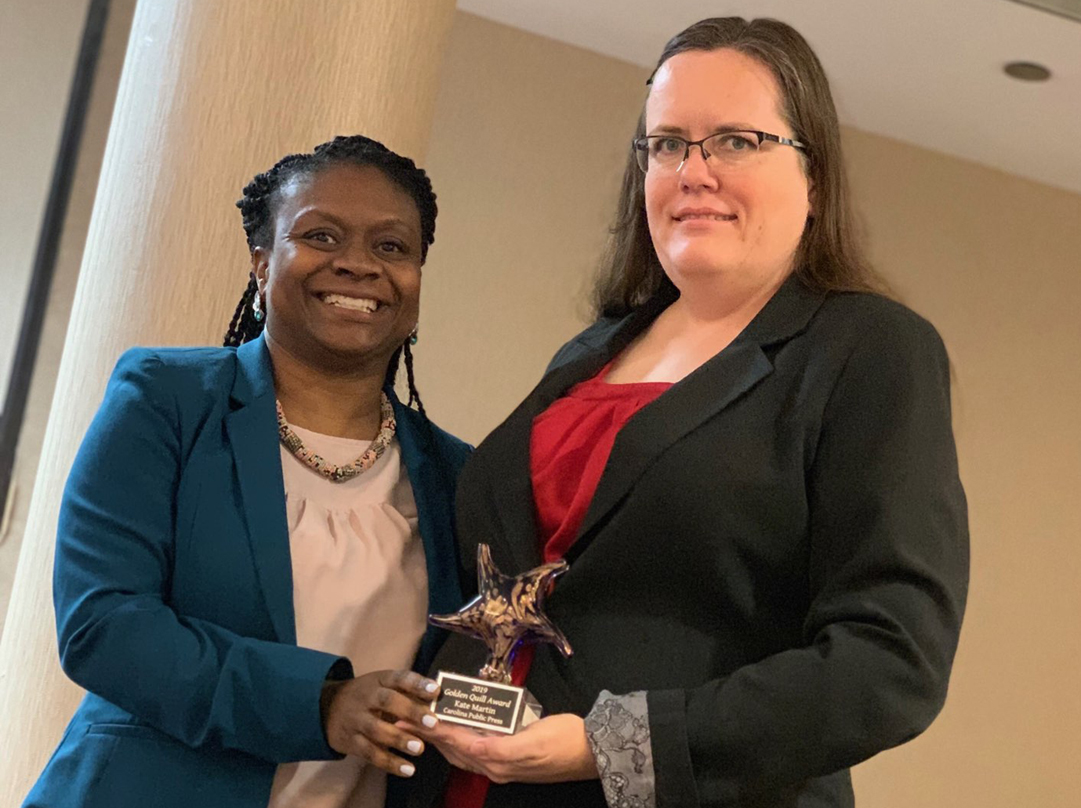 The N.C. Coalition Against Sexual Assault presented the Golden Quill Award to Carolina Public Press on Thursday for its leadership of the “Seeking Conviction” collaborative investigative series on sexual assault prosecutions that CPP and 10 other news media partners across North Carolina published in March.

The series deeply examined barriers to successful prosecutions for defendants charged with sexual assault in North Carolina. More than 30 people participated in the project, including interviewing dozens of sources across the state. CPP’s data analysis found that fewer than 1 in 4 defendants charged with sexual assault are ever convicted for cases opened and resolved during a 4 1/2-year span.

The series also highlighted laws and legal precedents in North Carolina that vex prosecutors — including one unique to the state: It is entirely legal in North Carolina to continue having sex with someone after being told to stop. In every other state in the country, sex after consent is revoked is considered a crime. In another legal precedent, it is not a crime to rape someone who has caused his or her own incapacitation through drinking or drug use.

Since the series was published, a bill passed unanimously in the state House of Representatives to make raping an incapacitated person a crime. The bill awaits action in the Senate.

The Golden Quill Award is rarely handed out, said Monika Johnson Hostler, executive director for NCCASA, during the organization’s annual conference in Chapel Hill. When the group created the award nearly 20 years ago, Johnson Hostler said the organization’s leaders wanted to reward journalism that looked more deeply than daily crime logs or reports on “stranger rapes.”

“We were really trying to recognize journalists committed to reporting on sexual violence who were not perpetuating rape culture,” she said.

For years, Johnson Hostler said, she had thought the number of sexual assaults charged throughout the state was far lower than others had estimated.

“To have a valid media outlet validate that was a game changer,” she said of CPP’s work.

Among the findings, the series revealed that nearly 1,500 people were charged with a serious sexual assault in a 4 1/2-year period. Of those defendants, nearly 500 of their cases remained open at the end of that time period.

Hostler also lauded CPP’s community forums as well as its listening sessions early in the reporting process. During the forums, CPP gathered experts in the field to discuss complex issues like sexual assault evidence collection, prosecution and juries.

Accepting the award on behalf of CPP was lead investigative reporter Kate Martin, who was lead reporter on the series and conducted the analysis of data from the NC Administrative Office of the Courts.