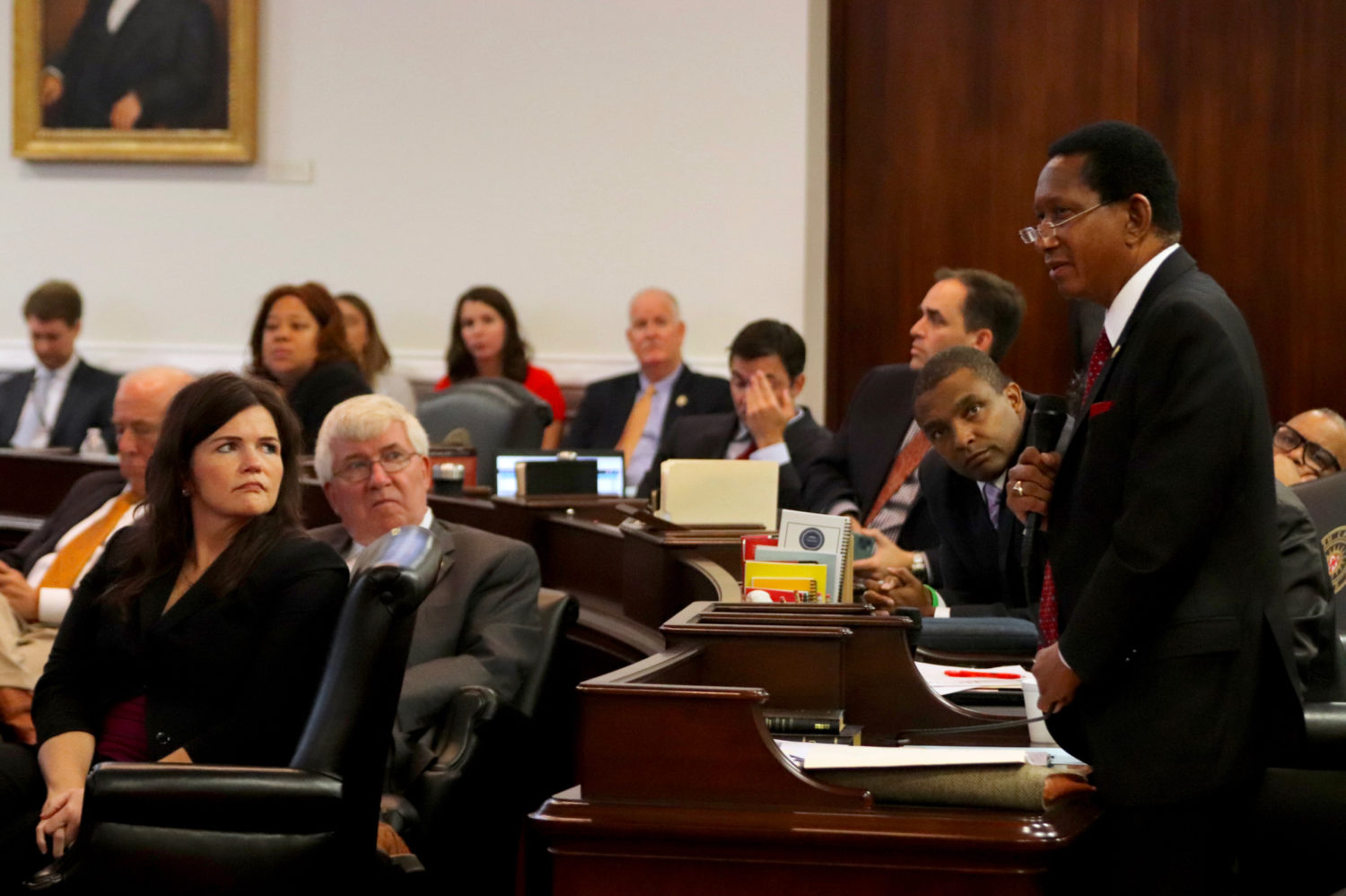 Longtime Sen. Floyd McKissick Jr. addresses his colleagues for one of the last times just before they approved his nomination to the State Utilities Commission. McKissick was one of three governor’s appointees approved in Thursday’s legislature session wrap up. Kirk Ross / Carolina Public Press

House and Senate leaders, at odds over how to wind up one of the longest sessions in recent memory, agreed to return for a few days on Nov. 13 and then close up shop until Jan. 14.

That gives them between now and mid-November to come to agreement on high priority legislation. Potentially, they would also redraw congressional districts in the wake of a court decision earlier this week banning the use of the current maps in the 2020 election.

Legislation still on the table includes Medicaid transformation and a critical round of disaster funding that would replenish the pool of state money used to match more hundreds of millions of dollars in federal disaster relief for recent hurricanes.

A $280 million disaster relief bill that included the matching funds and additional funds and personnel for emergency management operations cleared the House on Wednesday night, but on Thursday, the Senate introduced its own scaled-down version, focused mainly on the matching funds.

The two versions are expected to be reconciled in a conference committee during the two-week interim. Emergency Management officials have estimated that the state could run out of matching funds for some storm recovery efforts before the end of November without legislative action.

Also still hanging is a House revival of a Senate proposal from earlier this year to send a large chunk of a recently announced budget surplus back to taxpayers.

Couples could receive up to $250 and individuals $125 under the plan. But attached to the House bill is a $7.5 million grant to the city of Roanoke Rapids to help it deal with lingering fiscal woes over the former Randy Parton Theater, a provision that could make the bill far less attractive in the Senate.

Emerging from the chaotic session wrapup was a revised teacher pay plan that provides two years of raises for teachers and school staff.

Teachers would receive an average increase of 3.9 percent raise and staff a 2 percent increase each year for the next two years. The raises would be retroactive to July 1, the beginning of the state’s fiscal year.

The pay increase also contains a sweetener meant to entice Democrats to join in overriding Gov. Roy Cooper’s veto of the state budget.

A portion of the legislation, Senate Bill 354, would bump up the raises by 0.5 percent and includes a 4 percent pay raise for university and community college employees – but only if the budget bill becomes law.

Senate leader Phil Berger, R-Rockingham, challenged the governor to sign the bill, saying that with the House and Senate action a raise for teachers will be up to the governor.

“Nobody believes the governor’s cheap rhetoric about teacher pay anymore. He has yet another opportunity to sign or veto a teacher raise,” Berger said in a statement after the vote.

Cooper fired back, accusing the Republican leadership of holding teachers hostage to get the GOP’s agenda passed. Cooper has pushed for an 8.5 percent pay increase for teachers.

Senate Minority Leader Dan Blue, D-Wake, responded to the bill by saying he has been frustrated in trying to negotiate with his counterparts. He said they recently rejected a 6.5 percent compromise pay plan.

“It is incomprehensible that Republican leadership would think educators could be pressured into taking such an inadequate offer, and we stand with the governor in opposition to this legislation,” Jewell said.

House Speaker Tim Moore, R-Cleveland, said the teacher raises and the additional funds for community college and university employees was a significant offer that the governor should consider.

“This is no small thing,” Moore said in an interview with reporters Thursday.

He said he hopes the governor realizes that the raises are a “game changer” and releases the Senate Democrats to vote to override his veto.

Moore said he’d like to see the governor and Democratic legislators drop their demand for Medicaid expansion.

Democrats, meanwhile, showed no signs of budging. On Thursday, a Senate vote on an override for three bills that Cooper has vetoed, including the budget, was canceled, and the bills were withdrawn from the calendar.

In an interview Tuesday, Berger said that if an override did not take place this week, it could still be scheduled when legislators reconvene later in November.

However, in a statement sent out after adjournment, he sounded a little less certain, saying the Senate session had ended with most of the budget passed.

“It took a little longer than usual, but the Senate’s business has concluded,” Berger said. “The final enacted budget, which includes the ‘mini-budget’ bills, totals 98.5 percent of the original budget.”

This year’s budget stalemate is similar to past standoffs between the legislative and executive branches, but the passage of automatic continuing resolution legislation in 2016 made a difference, eliminating the need for crafting short-term funding plans while negotiations grind on.

Berger said under the old system, the legislature would get to the end of the fiscal year and have to hold negotiations on what should be in the continuing resolution.

He said the automatic continuing resolution, which essentially funds the government at the prior year’s levels was a substantial improvement, but it did change the dynamics.

“I guess some people would argue that you’ve taken the pressure off by doing that because for all practical purposes we have a budget,” he said.

Asked if this year’s difficult session portends a long-term shift in the way budgets are put together or if there would be a return to the normal process, Berger said:

“I don’t know; around here I think normal is never necessarily the same as normal used to be.”